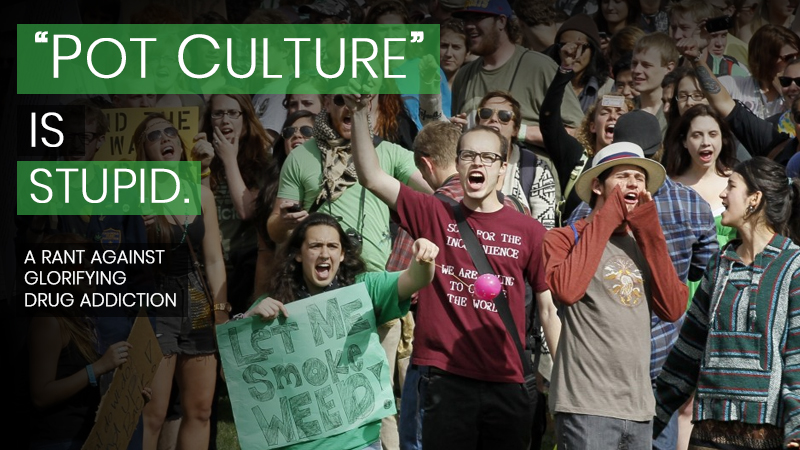 When did everyone suddenly become a hardcore pothead?

It seems like wherever I go anymore I’m being blasted with the stench of weed. People from all walks of life have suddenly decided it’s cool and hip to get high and smell like a skunk. And please don’t give me that line of BS about how “It’s only the shitty strains that smell bad!” No, the shitty strains just smell the worst. I’ve smelled “higher quality” strains and they still smell like a skunk, just not as strongly as the so-called “shitty strains”. No matter what strain you’re smoking, weed smells like roadkill skunk, it’s just a matter of how potent the smell is.

There have always been potheads, they were usually skinny people people who looked a cross between Shaggy from “Scooby Doo” and Jay from “Jay and Silent Bob”. They would always talk slowly, nothing would ever seem to bother them, and they were always chilling out to Pink Floyd or Sublime or NWA. They were for the most part harmless well-meaning people and could be fun to hang out with every now and then when you just wanted to chill and shoot the shit and talk about how legalizing pot would bring about world peace.

Then after what almost felt like overnight, I watched every Tom, Dick, and Stacy around me suddenly become weed connoisseurs. Out of nowhere, everyone was sporting pot leaves on their clothes, talking frantically about the health benefits of weed (always exaggerated by these people), and getting high every chance they got. It started with people just casually chilling out and passing around a bowl at a party, then it evolved into people getting high during particularly stressful days. From there, it snowballed and now we have people needing to run off and spark up the moment things get even remotely rough. If they can’t, then they get irritable and unable to cope with even minuscule amounts of stress. I’m about 95% sure that’s the definition of “addiction”.

I can hear the millennial Redditors now, whining in between coughs. “B-B-BUT AJ, MARIJUANA ISN’T ADDICTIVE! STATISTICS SHOW-“ First, show me the study that proves marijuana isn’t addictive. Then, you can show it to the National Institute on Drug Abuse, and explain to them why their research is wrong and you’re an unrecognized genius. Anything that causes a sense of pleasure can be addictive if overdone, idiot. Even working out can become an unhealthy addiction if you become too dependent on praying at the iron temple to relieve stress. That’s why most healthy well-functioning people have varied interests or hobbies, if we focus on just one thing too much it becomes an addiction. Yes, I am well aware that it’s less addictive than other drugs like coke or heroin, but it is still very much addictive and causes withdrawal symptoms.

I want to clarify something here. I’m not against pot at all. Pass me the bowl at a party, I’ll take a couple hits (I never seem to learn my lesson about smoking weed and drinking at the same time). In fact, I’m an ardent supporter of legalizing all drugs. What people do in their own homes and on their own time isn’t my concern or business. My real problem isn’t with the recreational user, it’s with the growing number of people who have made pot their entire life and identity (and if you’re about to leave a comment saying “BUT WHAT ABOUT GROWERS” you can fuck right off, you know what I meant you pedantic bastard). When the only thing you have going for you in life is a drug addiction, it’s not your “identity”, it’s a problem, and you need to seek help.

You idiots are basing your entire lives around a plant that gets you high. And every day, there’s more and more of you. It’s become trendy to walk around smelling like a giant pot cloud, like a pothead version of Pig Pen from the Peanuts. Instead of ostracizing these classless morons, we laugh and encourage it. Nobody has any sense of pride or decency anymore, they don’t care how they look or smell, which I guess is easy when you don’t have to worry about going to a job. That’s something that always amazes me about not just potheads, but addicts in general. They’re always broke, but somehow they can always afford that next hit.

I’m certainly not attacking all potheads, you can definitely be a pothead and NOT be a totally worthless lazy loser who does nothing with their life. I have a friend who’s been a lifelong pothead. Does he sit on his ass all day getting high and watching shitty movies and TV shows? No, when he’s not working his ass off to take care of his daughter, he’s DJing and making his own music. I’m not talking about one of those fake DJs with a laptop or some untalented mask-wearing hack like Deadmau5 (I’d be ashamed to show my face too if I looked like this). My friend is old school, and uses a turntable and vinyls to make his own mixes. He would piss on one of those dweebs with a laptop and smack Deadmau5 upside the head with his stupid mouse mask. My friend doesn’t let pot be his entire identity, he incorporates it into his current identity. Unlike most of these millennials who get high and sit around talking about how high they are and “dude weed lmao”.

Indeed, there are many potheads out there who are highly creative under the influence of weed. There’s nothing wrong with this, at least these people are doing something worthwhile instead of being lazy apathetic losers. And again, let me reiterate this for the baked idiots with the poor short-term memory, POT IS NOT THEIR ENTIRE IDENTITY. That guy who gets stoned and paints amazing landscapes or drops acid and paints some trippy Alice in Wonderland style art isn’t known because of his drug addiction, he’s known because of what he does when he’s under the influence. Drugs can amplify talent and personality by breaking down self-imposed doubts and insecurities. If you have no talent and no personality, they amplify that too and turn you into an obnoxious douchebag who can’t stop talking about their favorite drug.

When Jimi Hendrix got high he shredded a guitar like he invented the damn thing. When Jim Morrison got high he wrote lyrics that sound deep and important but are really just pretentious wank which we can forgive him for because for his time they were actually a different and unique concept. When Bob Marley got high he played the same music over and over again with different lyrics but we can forgive that because he basically exposed America to a whole new genre of music. When Snoop Dogg gets high he drops some of the illest tracks in rap history. When most of you get high, you sit on your ass playing Call of Duty or you continually brag about how high you are then zone out in front of your TV, which you usually need at maximum volume because your hearing has been stunted by your high. And you know what? That’s your goddamn right as an American to do so. But it’s my goddamn right as an American to tell you you’re a drug-addicted loser with zero motivation. It’s also my right to not have to smell the stench of weed in my own home. But if I complain about that, people tell me I’m just being an uptight prude and that it doesn’t stink and they love the smell of it and weed is great and anyone who doesn’t worship the Great Green Plant is evil and hates women, minorities, and gay people and voted for Donald Trump. Seriously, some of these potheads are borderline cultists with their obsessions. The Cult of the Great Green Plant. Want proof? Just say anything anti-weed anywhere on Reddit and watch the downvotes come pouring in.

I really hate Reddit’s userbase, it’s the perfect example of how the internet has turned into a giant crybaby suckfest full of hyper-liberal snowflakes who circlejerk in their echo-chambers, only leaving to go gang up on anyone who dares to go against their beliefs by doing things like deplatforming them or stalking them and getting them fired from their jobs. You can do something as simple as express support for Donald Trump and come under relentless attack from these whiners. Not that the right-wing hugboxes are much better, they’re often just as full of blind vitriol, except the left is much more vocal and controlling right now. These political extremists suck and so does Reddit. If you rounded up even just half of Reddit and locked them away somewhere without internet access, the amount of butthurt in the world would decrease tenfold and the stench of dirty diapers and salty dried-up tears that currently stinks up the internet would finally begin to clear up. I don’t want to be the “I told you so” guy, but I told you so. I called this back in 2010. They’ve scrubbed, sanitized, and commercialized the internet, they’re going after people who don’t go along with the mainstream narrative, and soon they’ll be doing things like forcing you to use your real name on public forums and requiring webmasters to jump through extra hoops and setting “standards” for what can and can’t be said on your website.

Sorry for the side-tangent, but not sorry, fuck Reddit and fuck censorship, really.

But more importantly, fuck obnoxious potheads. Smoke your smelly stink-leaf and keep it to yourselves, you pushy assholes.