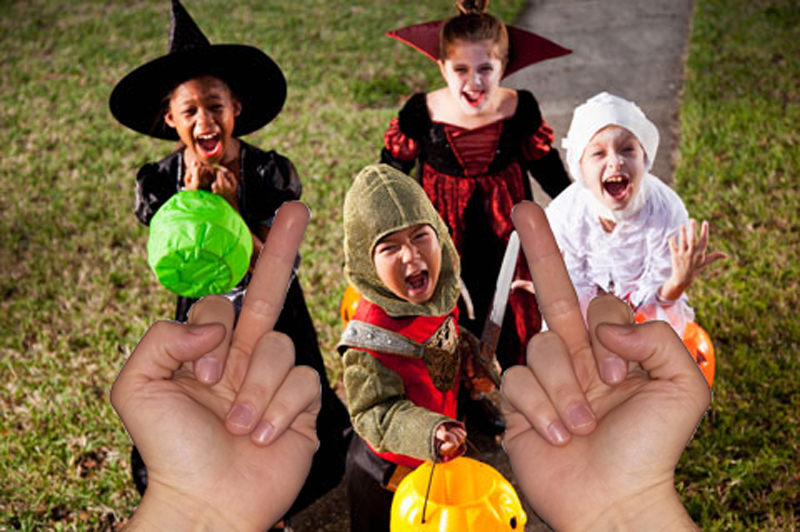 Tired of all the bullshit on Halloween? Me too.

Every October 31st it’s the same shit. A bunch of screaming brats and their slow-witted parents go door-to-door demanding free candy like a bunch of greedy welfare recipients (I’m lucky enough to live in Philadelphia, where these two groups are one in the same!). Generic overpriced costumes from the local party supply chain, half-assed Walmart costumes for those too poor to afford the overpriced shit at the local party supply chain (On a side note, can you local party supply chains PLEASE stop parking your panel vans outside my house all hours of the day and night? It’s a fucking eyesore.), the overdone homemade costumes, and the “Fuck it, I’m throwing this wig and mask on and calling it a day” costumes.

Was it always like this? I don’t fucking know, probably. I do know that when I was a kid, we had guidelines our parents drilled into our heads about what to do and what not to do on Halloween. Here’s a highly-bastardized version of what Halloween guidelines all the booze HASN’T killed off.

1. Wear a fucking costume or fuck off.

It never fails, every Halloween there’s at least four or five dipshits that don’t bother to even so much as put on a fucking mask. Instead, they come up my steps in a pair of jeans and a t-shirt with their bags open demanding candy. For fuck’s sake, you can get a damn Jason mask at Walmart for like $5. Even worse are the faglords that try to be clever and say “I’m going as myself for Halloween, LOL!” (At my house this is an offense punishable by having a high-pressure garden hose turned on you). These cheapskates are nothing more than mooches, and should be treated as such. Before they can even open their mouths to say “Trick or Treat”, tell them to fuck off. Which leads to my next one.

What the hell happened to trying? No masks, no costumes, and now people don’t even follow the most basic tenet of Trick-or-Treating? How do you NOT say “Trick-or-Treat”? How do parents allow this shit? My parents would make me say “Thank you” to every person after getting candy, to not say “Trick-or-Treat” was unthinkable. Just like the assholes without costumes, don’t give these jerk-offs anything. No free rides here, asshole.

I’m no prude, but society’s gotten a little too carried away with female costumes.

I understand when a stacked 22 year old dresses like a slutty nurse. Hell, I understand when a 16 year old girl does it. What I DON’T understand is when parents allow their 12-and-unders to dress promiscuously. Why the fuck is that 10 year old girl wearing a skin-tight crop top and 8 layers of make-up? What kind of sad excuse for a parent dresses their 8 year old daughter up as Harley Quinn a la the new “Suicide Squad” movie? That little girl doesn’t even have developed breasts yet, why the fuck did you dress her up in booty shorts that would make Daisy Duke tell her to turn it down a little?

4. You’re wearing the costume for one or two nights, three tops. Why did you spend that much on it?

I love creative homemade costumes. This year, I threw a party and dressed as Captain James T. Kirk, the BEST captain of the USS Enterprise (Picard sucks, get over it). All I had to do was make the shirt, since fuck spending like $40 on a premade one that wasn’t even based off the one from the Original Series (Side tangent: Fuck the new movies, they made Kirk a pussy, Uhara isn’t even black anymore, and Spock has Asperger’s. What the fuck did you maniacs do to my Star Trek? Even Simon Pegg couldn’t save that shit). I got a yellow turtleneck on the down-cheap, trimmed and tucked the neck, threw some gold shit on the cuffs, and made a Starfleet badge from cardboard and aluminum foil. Total cost: $FuckingCheap.

There are people out there who will pour hundreds of dollars and months of their time into their costume. Seriously? I could understand if you were going to use it later for conventions (I’m not going near one of those nerdbaths known as a Star Trek convention), but you’re wearing it for two nights. Don’t give me that “Oh, but I’m going to parties!” shit. You aren’t Charlie Sheen, you ain’t going to more than one or two parties tops. And those parties are probably nothing more than you and your chucklefuck friends standing around awkwardly drinking and wishing that someone had the courage to invite girls to the party. Get over yourself. Come down off your high horse and buy that overpriced shit from Halloween Adventure or that cheap shit from Walmart like the rest of us.

As I write this, there are people knocking at my door. They’re probably ringing the doorbell too, but I took care of that problem: 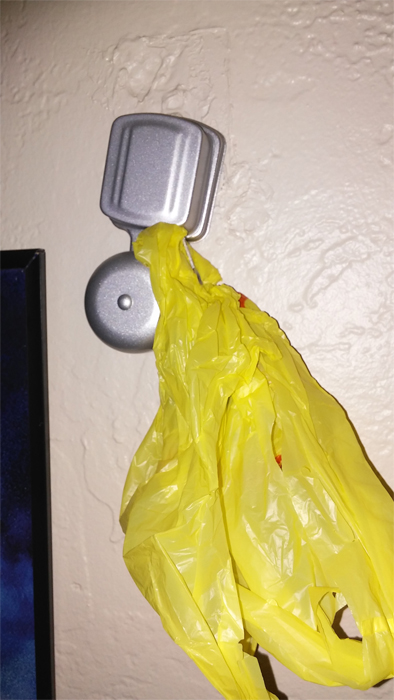 I don’t plan to give candy out this year (your mom raised her rates which forced me to cut expenses), so I turned my living room lights off and am holed up in my computer room. As a kid, I was told that if a house didn’t have lights on that meant they weren’t giving out candy and to skip these houses.

Today, kids and their equally retarded parents don’t care. Instead they choose to go to every door, hoping to maximize their free candy handout. For fuck’s sake I’m not even decorated! Go away, stop pounding on my door, you just watched that other family not get an answer, what makes you think your luck will be any different?

These sneaky bastards will try anything to get you to answer too. They’ll scream shit like “POLICE, OPEN UP!”, “WE HAVE A SEARCH WARRANT!”, “IF YOU DON’T ANSWER WE’RE FORCING THE DOOR!”, and my personal favorite, “SWAT IS ON THE WAY!” Some of them are even clever enough to get my name from White Pages or some shit, and will scream my full name in hopes that I’ll answer. Sometimes they’ll even wear suits and sunglasses, and hang out around those party supply company’s vans. I hope one of them accidentally dents the van, the party supply company will sue them and both parties will leave me the hell alone.

6. Don’t give out shit like pencils or those stupid useless erasers.

This one’s more for the people giving stuff out. Don’t be one of those people who gives out shit that’s not candy or even edible. Unless you’re giving out money, and even then nothing less than a $1. Also, if you give out trail mix I hope your house burns down.

7. There is an age limit on Trick-Or-Treating.

There comes a time in every young person’s life when it’s time to stop Trick-or-Treating. That time is somewhere around the freshman year of high school. If you come to my house and you look like the guy who used to be my beer runner when I was in high school (or would have been if I actually had friends), I have no problem shaming you. And if you have no shame, I have no problem turning the hose on you. If there’s more than three of you it counts as a re-enactment of a 60’s era civil rights protest. And no, you don’t have to be black for that one to apply, racist.

8. There is a time limit on Trick-Or-Treating.

There comes a time in every young person’s life when it’s time to stop Trick-or-Treating. That time is 8:00 PM. If people are still knocking at my door in an hour, I’m turning on the hose.

9. We both know your infant isn’t going to eat that candy.

Remember what I said back in #7? There’s an age limit on Trick-or-Treating, and just because you’re carrying around an infant doesn’t change that fact. Your infant might be adorable as fuck, but that doesn’t net you any free candy. My parents used to call people out on this shit all the time, and the infant-toting morons would have the audacity to get mad. Whereas my parents would politely tell them to get lost, I like to politely tell them “Get fucked.” Wanna give me back-sass? Out comes the hose.

One of the most useful tips I can give for an Angry_Jerk Halloween is to always keep the hose within reach, and always turned up to full pressure.

10. Don’t put up a fucking display if you’re not going to be giving out candy.

You people are worse than the assholes in #5, and possibly even ISIS camelfuckers.

As a kid, nothing confused and frustrated me more than going up to a house with flashing strobe lights, cobwebs, and tombstones in the yard only for nobody to answer. Why do you have all that shit up to attract attention to your house if you’re not going to be giving out candy? At least turn off the fucking strobe light.

People who do this sort of thing deserve to have their house egged.

In closing, if you’re one of the people I mentioned in this article, let this be a wake-up call. If you’re one of the parents I mentioned in #3, please kill yourself, or at least sterilize yourself. I can make the necessary arrangements for you if you’d like. Just catch a plane to Philly and I’ll even pick you up from the airport free of charge. Seriously, what the fuck is wrong with you? Do you WANT your child to grow up to be on “16 and Pregnant”? I fucking hate that show, I hate bad parents, I hate Halloween, fuck off and let me drink in peace. 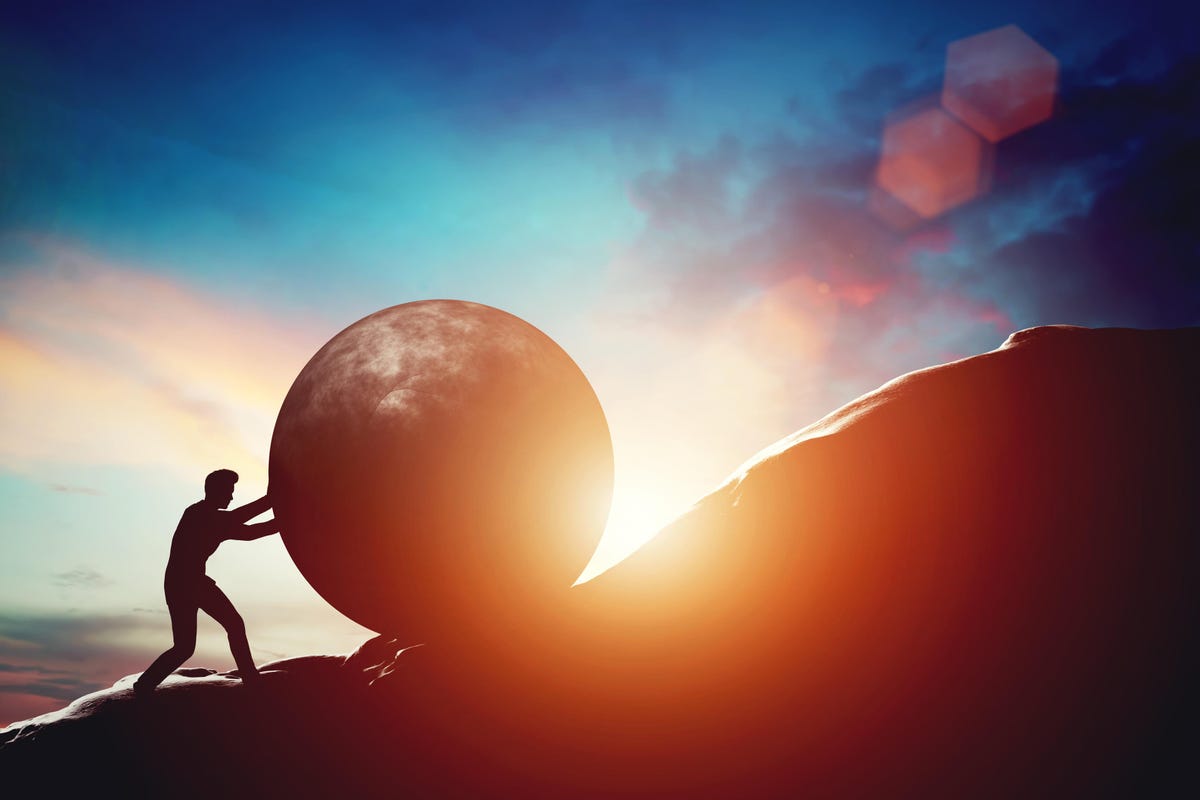 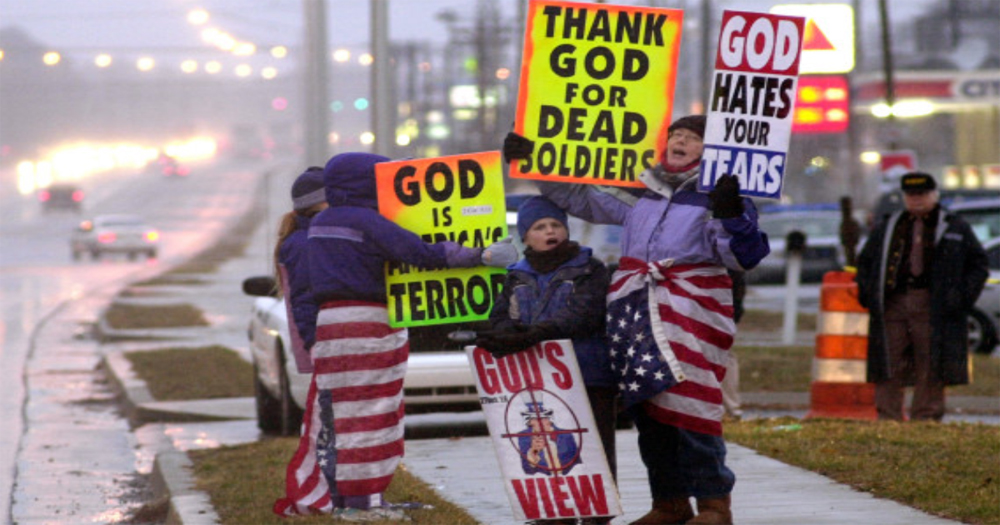 Free speech is a double-edged sword 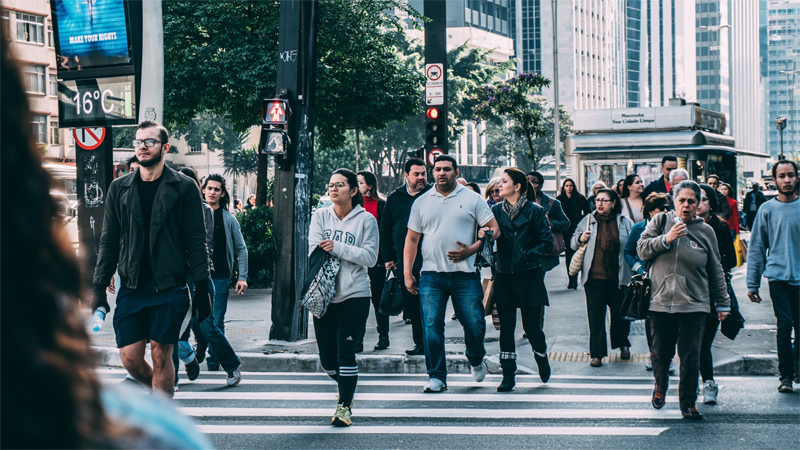