Almost everything on my computer is pirated right down to my operating system. I don’t feel any sympathy whatsoever for any of these directors, actors, musicians, or programmers who claim that when we download stuff we’re stealing from them.

95% of today’s music is mass-produced corporate-sponsored generic horse shit. If you can bring yourself to overlook that the mish-mash of nonsensical noise being thrown together and called “music” just downright sucks ass, most CDs are only 30 or 40 minutes long. So we’re expected to pay $15+ for 30 minutes of shitty music? Most “artists” (I use the term VERY loosely here) generally only put one or two “good” songs on each album they release. The rest are either covers or filler songs that not even the fans care about. Even looking at it from a fan’s perspective, what a fucking rip-off.

People like to whine about how music pirates are screwing over the artists (because Jay-Z really needs that 6th black Hummer with tinted windows). While this might be true to some extent, we’re not screwing the artists over nearly as bad as the labels they sign on to are. Depending on who they are, the artist makes anywhere from 10 cents to $2 off of each CD sold. The rest goes to greedy Jews who sit behind a desk doing nothing for a few hours a day, then go play golf with their other greedy Jew buddies. You think you’re supporting the band, but in reality you’re just supporting faggot Shylocks like this guy: 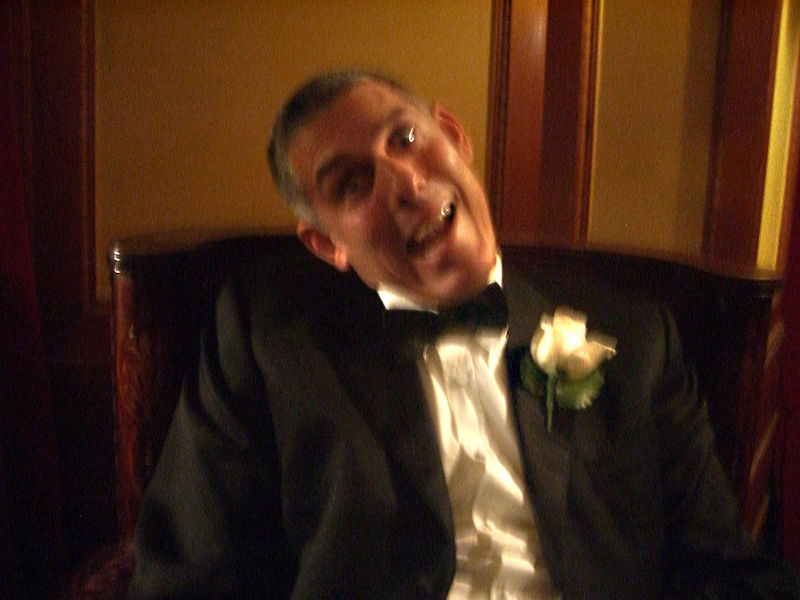 Lyor Cohen, CEO of Warner Music Group, and most likely the reason your YouTube video was muted or pulled. Seriously.

So no, file-sharers aren’t screwing the musicians out of money, the labels they sign onto are. It’s pretty much like signing your soul over to Satan, except instead of a bad-ass red guy with horns and fire he’s just some conniving kike in a suit backed up by more conniving kikes in suits. Only when you get as big as Michael Jackson can you negotiate a contract that works out in your favor. Good luck getting there when untalented hacks like Steve “These Lips Are Made for Sucking” Tyler and Mick “I Sold My Soul To The Devil For Immortality” Jagger have been hogging the spotlight for over 30 years. Seriously, Aerosmith needs to retire and Mick Jagger needs to keel the fuck over during a performance and die already. What are you, like 90? Old fucking asshole. Climbing to the top of the charts is like climbing a Mt. Everest made out of It-girls, mush-mouthed thugs, and mediocre old motherfuckers whose heyday ended around the same time as the Vietnam War.

As far as movies go, we’re expected to pay $11 per person for generic plots and shitty remakes starring untalented actors and actresses who think they’re fucking royalty? Bull-fucking-shit. Seriously, what kind of fucked up world do we live in where whiny douchebags who pretend to be someone else to entertain others make more money in one year than people who put their lives on the line daily will make in their entire lives? I don’t even pirate movies for convenience anymore as much as I do it out of principle, because the idea of some pompous overpaid liberal priss (HI SEAN PENN) throwing a pissy-pants temper tantrum over my actions puts a smile on my face. And then you bitch us out if we buy the movie on DVD, then make copies of it to share with others? Eat a dick, MPAA. Also, the “Screen Actor’s Guild” should totally change its name to “Film Actor’s Guild”, like in Team America. “FAG” is the perfect acronym for a bunch of self-assured liberal douchebags with superiority complexes.

One of my biggest gripes though is with computer software. The last time I paid for a computer program was when I bought Civilization 2 back in 1999 for about $15. Aside from the obvious “Why pay money for something freely available?”, most of these programs have tons of fucking bugs.

Look at Adobe’s shitty product line. Flash CS4 has a horrid memory leak, Dreamweaver CS4 has an interface that not even a mother could love, and Dreamweaver CS3 takes up 1/3 of the CPU, even when idle: 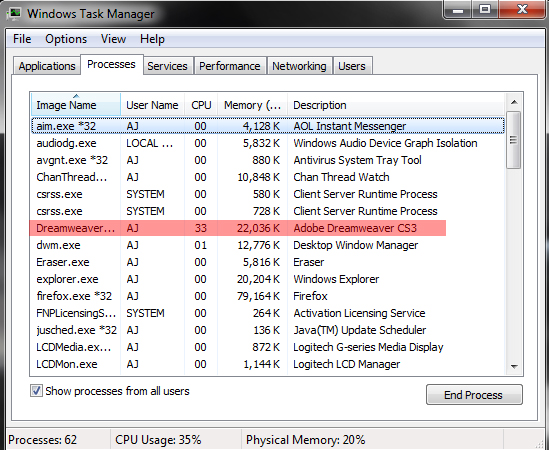 Adobe pops a squat and shits out new editions of the same shoddy bug-ridden shit twice a year, and expects users to pay hundreds of dollars for them. No, shit. The most recent version of Photoshop (CS5 as of this writing) costs $999:

Holy fucking shit, almost $1,000 for a program to edit pictures. For all of Adobe’s programs together, it costs $2,599. AND PEOPLE ARE ACTUALLY PAYING THESE PRICES?! There is NO computer software worth paying more than $60 for. At all. I don’t care if the program is capable of time travel. If that shit is $400 and I can’t pirate it, I’ll live without fulfilling my fantasies of fucking Grace Slick before she became a huge slut or going to the future and obtaining advanced weaponry to come back to our time and conquer the world.

I refuse to believe that there are people or companies out there paying these outrageous prices for this shitty half-assed failware. Obviously Adobe is some kind of front for illicit activities, and that’s why they’re still in business despite charging thousands of dollars for garbage. I’m thinking they’re probably involved in black market arms trading with Mexican drug cartels. This makes it your patriotic duty to pirate Adobe’s software. Don’t think of your downloading as stealing from a reputable business. Think of your downloading as vigilante justice against the Mexican drug cartels. Like an internet Punisher. When you pirate Photoshop, you’re Frank motherfucking Castle!

So no, piracy isn’t theft. The real theft comes in the form of $20 CDs, $11 movie tickets, and $1,000 computer software. Piracy is always going to exist no matter what. Take the money you’re wasting on trying to stop it and invest it in ways to incentivize people into paying for your products instead of pirating them.

Also, it really helps to not charge so goddamn much. Just sayin’. 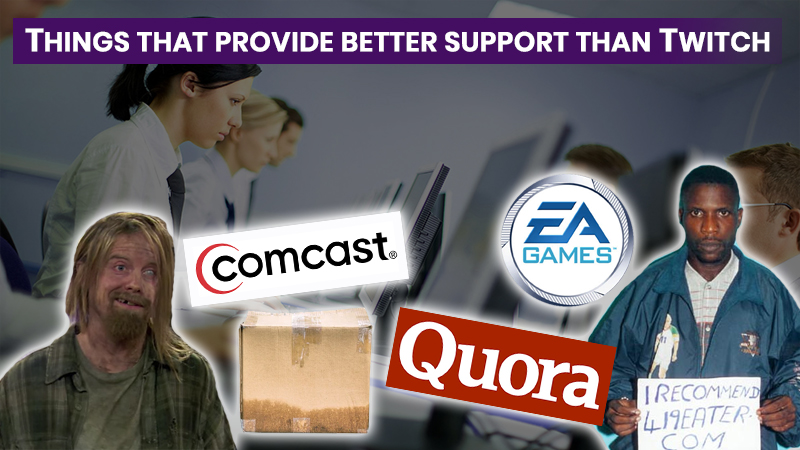 List of things that provide better support than Twitch