Skip to content
HomePeopleJoey Vento is still a jackass

Some time ago, I did an article attacking Joey Vento, the owner of a tourist-trap eatery in Philadelphia.

My reason for this was simple: He’s a money-grubbing publicity whore who puts himself on a pedestal while raping customers in the ass with exuberant prices for what’s at best mediocre food.

Two years and countless cheesesteaks later, I received an email from a guy named Gil Ortale:

your vento post was excellent to read. Let me know if it’s ok to swipe your pic and add a link to your post

I did some research, and it turns out that this guy has created a pastry he calls the “Market Day Canelé”, which seems to be a relatively popular item in the city. I can’t say I’ve ever even heard of these let alone actually had one, but I fully intend to check them out.

As I looked back on the article, I also realized that I made a couple of mistakes and misconceptions. Before we go any further, let me correct these:

With that shit out of the way, I want to use my new-found influence to further put this asshole in his place. Unfortunately, I don’t have the power to put him into bankruptcy, so I’ll have to settle with giving him even more of a verbal lashing.

First, let me start off by saying that it’s not his political views on immigration that I disagree with. He’s completely right when he says that immigrants should learn English before coming here, and aside from being dumbasses for playing into his obvious publicity stunt, the people who threw a pissy fit and cried “Racism” about the sign are liberal douchebags. However, Joey himself is a shameless publicity whore and is only running his dago mouth to draw more customers in. At best it’s a cheap business ploy, and at worst it’s some arrogant jackass who thinks that everyone should give a shit about what he thinks because he owns a popular business.

I have no idea why this place is popular. Back in 2008, I said that I had only been to Geno’s once and that it was so terrible that I wouldn’t go back. Well, I lied. I’ve worked in the food business for 7 years, and I know that it’s not fair to judge a place based on one experience. We’ve all had bad days. Lord knows I’ve had many of my own (MUST BE THAT BORDERLINE PERSONALITY OF MINE, RIGHT?). Maybe Geno’s had a bad day, so I thought it was only fair that I give them another chance. In late 2009 when I was living in the cold recesses of Mt. Asscrack, PA, me and my girlfriend at the time were visiting my family in Philadelphia. She started talking about Geno’s and how her dumbass friend from college wouldn’t shut up about how “omg wonderful!!!!!” their cheesesteaks were. I then remembered this article, and told her that her friend was a stupid whore with a mouth better suited for sucking my dick and doing lesbian shit in a threeway with us. But since she offered to pay, I figured I would give this place another chance. This is how it went.

My girlfriend wanted to look at the menu and gauge prices. Knowing that service is very fast-paced, I decided to wait away from the window to signify that I wasn’t in line, and therefore would not slow service down for any of the yuppy tourist fucks wearing khaki shorts and sporting sunglasses and designer stubble. Here is a picture demonstrating my positioning: 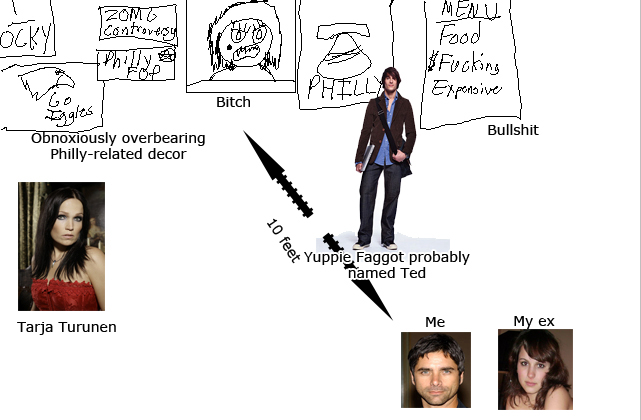 Tarja Turunen wasn’t actually there, but it would have been awesome if she was, so I put her in this picture. She can have my angel any night, if you know what I mean ;-).

Stephanie looked at the menu and calculated how much rape her pocketbook was going to receive from the exuberant prices, and I looked at Stephanie’s ass in that sexy sundress she had on and calculated how much rape her pussy was going to receive later on from my dick. Cue yuppie faggot Ted, who despite having the best education a trustfund can buy is clueless as Lindsay Lohan at a gangbang. He was less than 5 feet from the window, and us 10. He looks from us to the lady at the window, back to us again, back to the lady. The situation wasn’t looking too good. Poor Ted looked like his brain was going to explode from confusion if his neck didn’t snap first, Stephanie couldn’t decide between American and provolone cheese, and I wanted nothing more than to take Stephanie into an alley and fuck the shit out of her. Had Window Bitch not broken the silence, this entire scene would have continued ad infinitum. Window Bitch yells at me and Stephanie, “Order something or get outta here!” Excuse me, what the fuck? Window Bitch was so fugly that she had become accustomed to people shouting their order to her from a distance, and I made sure to inform her of this. I wanted to inform her of my wishes for her mother to contract AIDS, but I was dragged away by Stephanie to another line out of Window Bitch’s sight.

After getting my cheesesteak, my opinion of Geno’s changed. Now I was certain that Geno’s was an over-priced tourist trap. The meat was just as generic as it was the last time, and the cheese was, well, cheese. It was a regular cheesesteak, except it cost more money and was smaller. We finished our food, got back in the car, and fucked like rabbits later that night.

I gave Geno’s another chance, and I won’t be giving them a third. I swear on my non-existent soul.

So what else has Joey done between the time I wrote the last piece and now? He’s been on the moronic Glenn Beck’s show, as well as accused Michael “Mr. Potatohead” Nutter of being out to get him. You might think this guy has balls, but as it turns out, he doesn’t. He’s so afraid of reprisals, that he’s bribed the local police to patrol his home. What a fucking pussy. DON’T SAY SHIT UNLESS YOU CAN DEFEND IT, BITCH. Seriously, what kind of message are you sending to your enemies by talking shit then crying to the police if things get a little rough? If I was mainstream, I’d still be doing crazy shit like threatening the Los Zetas drug cartel, along with a lot more crazy shit that would make me a walking target for so-called tough guys. Why? Because I’m not afraid to die defending what I believe in, no matter how unimportant it may be in the grand scheme of things. That’s what being an American is all about: Dying on your feet instead of living on your knees.

At this point, Joey finding this website is inevitable, so let me close with this:

Joey, you are a conceited asshole who generates controversy to make money. Your food is overpriced and mediocre. While I’m sure you actually believe in what you’re preaching, it’s obvious to anyone with a semi-functioning brain that you’re only being this vocal to bring in even more money. Take your head out of your lap, wipe your jizz off of your lips, and realize that nobody really gives a fuck what you have to say on anything, be it immigration or motorcycle safety. You are nobody, you are not worth trying to kill to anyone. Stick to running your tourist trap and stop stirring up bullshit racial controversy for financial gain. You want to prove that you’re serious? Run for political office. Hell, I might even vote for you if you did.

Nah, you’re too yellow to attempt a run. You’re probably too afraid of being assassinated or something, fucking coward.

8/24/11- Before you fire off an angry death threat-laced email telling me that Joey died, remember that this was written in 2010. You know, before he died? Actually, feel free to send it to me anyway. My readers and I will be more than happy to laugh at your expense.

How to SPEED UP Openshot Video Editor! (Working 2020)