I was being a filthy hypocrite and surfing PrisonPlanet.com today, when I stumbled upon this gem.

All jokes aside though, I have but one thing to say to this: 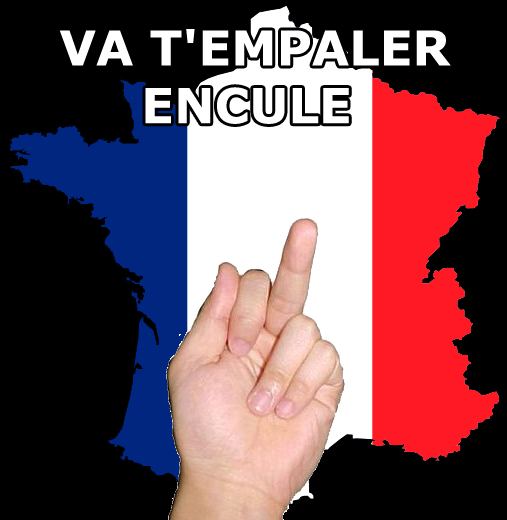 Am I really upset that some frog-eating faggots over in France can’t view my site? Fuck no. In fact, I had already been considering blocking all traffic from France, along with other worthless countries that I hate, like Mexico and Japan. I was just too lazy to implement it. Thank you France for doing 1/3 of my work for me.

France has never done anything notable other than get stomped all over by Hitler. The only times their army was half decent was when it was led by some schizophrenic chick or a midget. I have to concede though. Having a midget as the leader of your country is pretty bad ass. When Napoleon won battles, it was like saying to the other country “Yeah, you just got your shit ruined by a midget. Bitch, what?” Picture Wee-man from Jackass or Mini-Me from Austin Powers bitchslapping the shit out of some ghetto thug. That would be so hardcore that the ECW would shit their pants.

People like to tell me “If it weren’t for the French, America wouldn’t have beat Britain in the American Revolution!” Bullshit. France might as well just stood on the battlefield waving their tiny dicks around. Obviously America did all the hard work. Look at pretty much any war involving America and France. America busts their ass, then France comes in after all the difficult work is done. Either that or France just throws up the white flag and begs us to save their asses. “Ze Germans are coming! Ze Germans are coming! Save us Meester America!” I wish that Hitler simply annihilated France instead of conquering it. America gave over hundreds of thousands of lives to free France, and they repay us by treating us like shit.

Most people only hate France because they didn’t help us invade Iraq. While there are plenty of reasons to hate France, that is not one of them. They generalize the US population by assuming we’re all dumb-fuck wannabe rednecks like Bush. This isn’t true. Most Americans may be dumb-fucks, but they’re certainly not rednecks.

In 10th grade, I had the opportunity to spend my summer in France with a French family. I’m glad I turned it down. Otherwise I might have been tempted to go into one of their fancy restaurants and take a shit on the snobby waiter’s shoe. I also knew a person from France, and he smelled like hot sweaty ass in Phoenix in the middle of July. It’s like if someone didn’t wipe their ass after taking a diarrhea dump, then smeared year-old cheese sauce on their ass, hit the gym for a couple of hours, and walked around wearing winter clothes in the middle of the ghetto in 115° heat for 5 hours. This one time, I went to fuck a French chick, and her pussy was so hairy that I got carpet burn on my dick. Okay, I can understand not shaving your pussy. But at least have the common courtesy to trim it so it doesn’t look like a fucking jungle. When I take off your panties and a monkey scratches my eyes out, it’s time to trim your cooter. Even I have the courtesy to trim my pubes so that when you’re sucking my dick, you don’t get a mouthful of hair. Also, shave your armpits and legs while you’re at it.

France is to Europe what poo nuggets are to your ass hairs. Fuck France, and fuck snobby ass French people who think they’re better than America. Go to hell.