It’s about that time again, gents.

8/29/19 – Hi guys, I see you’re still around and kicking after all these years, albeit with a different name. Don’t be afraid to drop me a line, most of you were cool. Are MoMan, Shatner, Scottish Lord, and Harry still around?

I was up late last night, and I realized that I hadn’t done a BANNED! article in ages. The last two were done by someone else. So I decided it was time for a new BANNED! I saw this as a perfect time to test out my newly hired Mexican assistant, Juan. I sent Juan over to Arthur’s Hall to troll their forums. Keep in mind that Juan speaks limited English, so his grammar isn’t always good. Still, lulz-worthy results were produced in the end.

Way to go Juan. Now INS is going to be kicking down my door.

But Juan, what happened to staying classy?

That guy’s taking pictures of himself holding a gun! He must be planning to shoot up a public place! Quick, grab his gun, find some stuff he wrote, and label him with some bullshit psychological disorder!

Arnold is a faggot whose dad was a member of the Schutzstaffel. If he ever became president, I would terminate him.

Coors Light? That beer is awful. But if you want white trash piece of shit beer, Budweiser is the way to go.

Uh oh Juan. Looks like you just disrespected the man himself!

I have to agree with Juan. What was up with that shit? 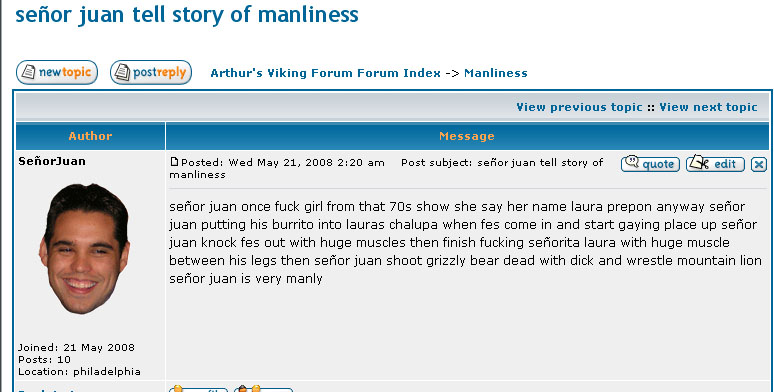 Juan has been reading Goatsack I see. Also, I’d still fuck the girl.

Is Miss Cleo even still around?

Señor Juan didn’t understand why people were bitching at him and replying with unfunny posts in Russian, so he stopped posting there. He said he didn’t get banned, and begged me not to call Immigration on him for his mistake. 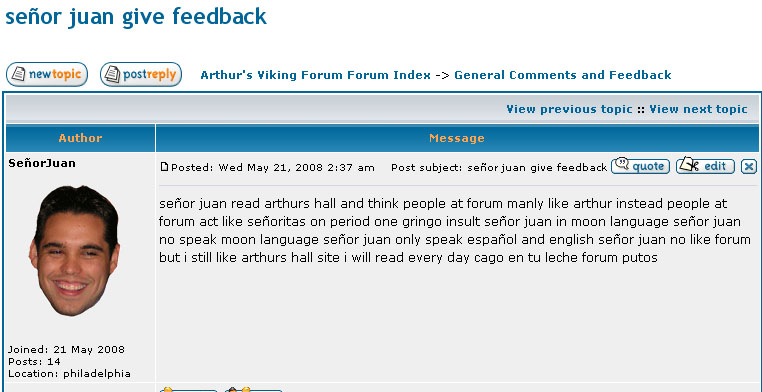 Never the less, Juan made me literally bust out laughing several times, so maybe I’ll allow him to do another BANNED! in the future.