PrisonPlanet.com is home to some crazy kooks.

I’ve never really been to the forum other than to glance at links I’ve been given over MSN or whatever, and when I created my sleeper account there, it took almost a week for the admins to approve it.

However, the comment system for the articles on the front page requires no approval at all. You can put in any name, a fake email address, and say whatever the hell you want. 9 times out of 10, the admins don’t delete it. This means that every crazy end-times Christian fundy can post all kinds of drivel trying to get us to come to God before the NWO/Antichrist takes over the world (On a side note, it would just blow the minds of these retards if the person who deposes the NWO’s rule was the actual Antichrist). The comments also have their share of regulars. These people fit into one of five categories:

The potential for lulz is immense.

This guy deserves it for thinking anyone gives a fuck about his kids: 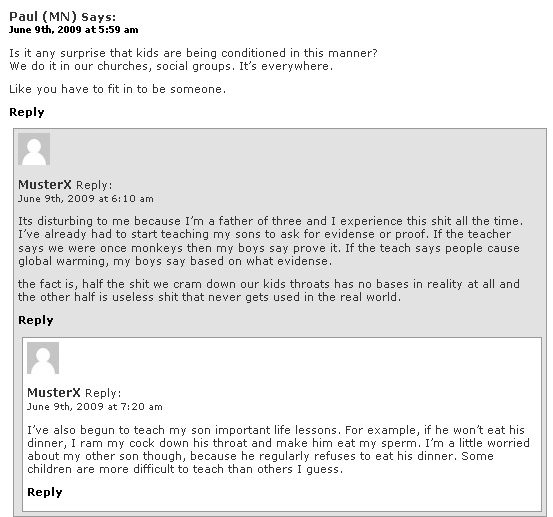 If you think this is sick, you should see the post that was too big for me to screen cap. Let’s just say MusterX felt compelled to share his teaching methods. 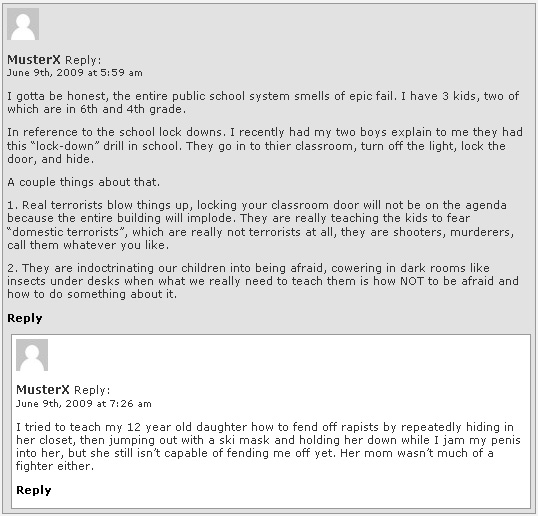 You know, if I kept this up for a couple of weeks, I could probably convince the other regulars that this guy really does sexually abuse his children. 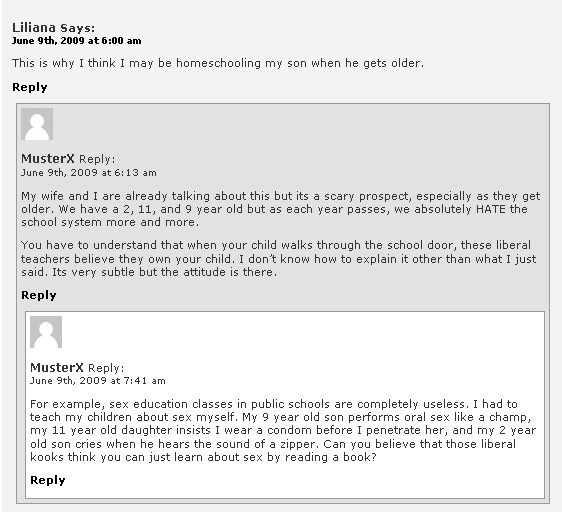 He didn’t have anything to say to this. Fucking pussy: 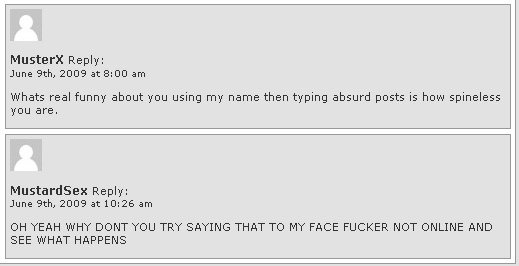 My penchant for being able to write sick stuff like this scares me at times. 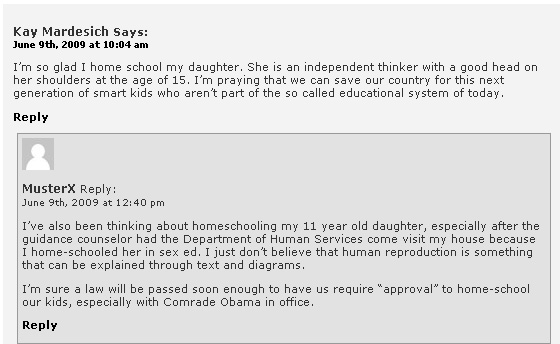 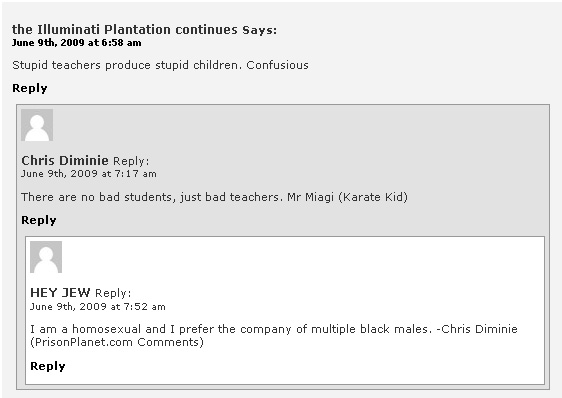 I get emails from a guy who sends me inane shit like this. Too bad WordPress doesn’t allow their comment system to automatically trash this retard’s comments like Gmail does. 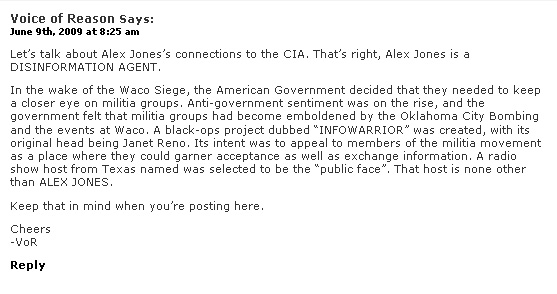 This is the smartest thing ever said in the comments. No joke.

You laughed at this. Go ahead, embrace your immaturity. I won’t tell. 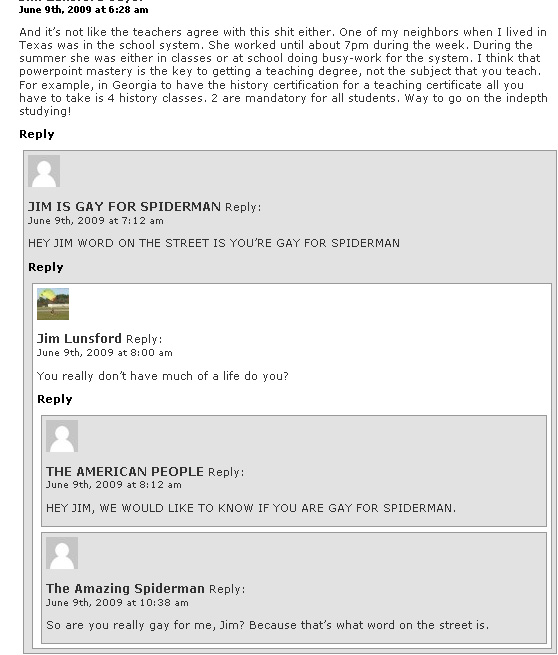 It’s so funny, other trolls are using it on other regular members: 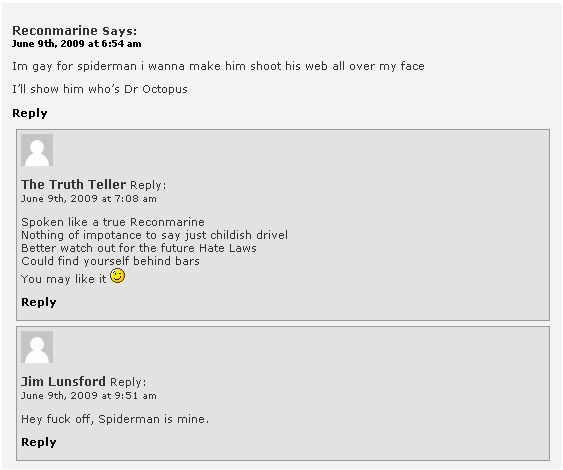 Spiderman wanted to get to the bottom of this, so he went on MySpace and found Jim (or some now-confused sap with the same name) and sent him a message: 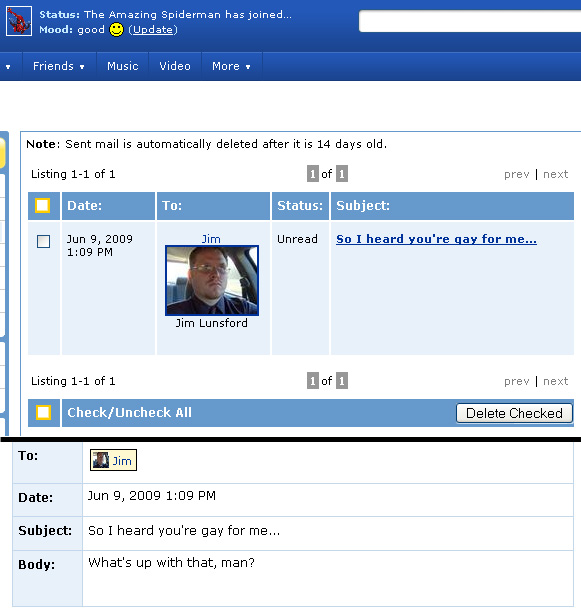 I should do this more often.