As I’m typing this, I have no internet connection because Verizon’s equipment sucks. I’m moving out of this house at the end of the week, so I figured I’d get rid of anything I don’t need. I started going through my collection of mostly unlabeled burnt computer CDs to see what I was going to toss and what I was going to keep. I stumbled upon several CDs with stuff I downloaded or made when I was between 15 and 18. I took everything off of the CDs and put it all onto my laptop to sift through it for old stuff I enjoyed. I came across a bunch of my old music folders, and decided to add them to my current one. As of this writing, I now have 266 songs in my music folder, most of which I can’t figure out why I have. To give you an idea of the severity of this:

I’m assuming they had a purpose to me at one point, but I can’t remember whatever the purposes were. I’ve kept them on the off-chance I might need them for something again (and because try as I might, I can’t stop listening to “Mr. Roboto”).

To make my music easier to find in Windows Media Player, I decided to label everything appropriately. I know most music files aren’t labeled right, but this was just fucking ridiculous. I think I have carpal tunnel syndrome in my right hand now from all the relabeling I had to do. Below are a few examples of what I found: 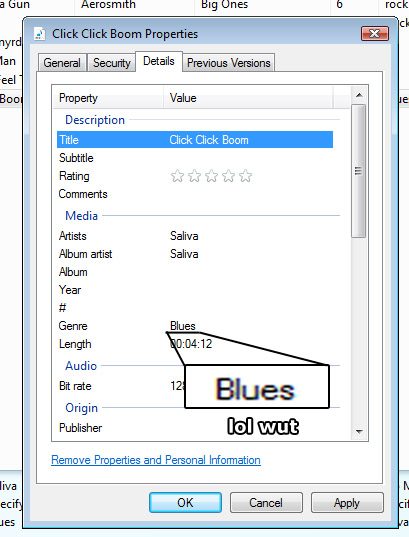 While the song sucks huge amounts of ass, how the fuck could it possibly be labeled “Blues”?

How many different names does Weird Al Yankovic have? At the very least, 5: 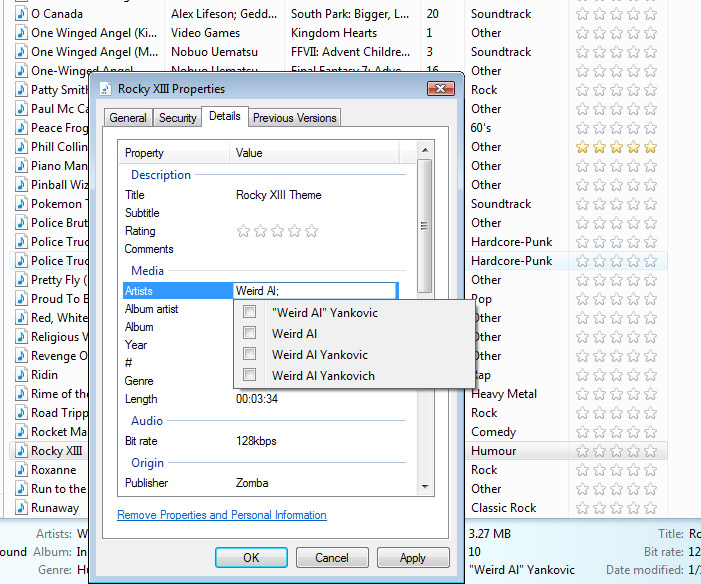 Not pictured was “Weird Al Yankowic” which I had removed before I took this screen cap. The lack of consistency with an artist’s name among 12 of his songs is horrible. I half expected to see “Weird Al Yankadick” amongst the names.

If you though that one was bad:

I swear I didn’t edit this in any way. The only reason it says “Date Created: 2/24/09” is because that was the day I took it off of the CD and put it on my computer. This fucker had better get on his knees and beg Chuck Berry to forgive him. How do you fuck up the labeling that bad? Buddy fucking Holly? “Johny B. Good”? I can feel my blood pressure rising.

266 songs, and I had to make drastic changes to the details of 216 of them because some slack-jawed dumb ass decided to put in information he wasn’t sure about. There’s no way in hell anyone would be certain that “Click Click Boom” is Blues, or that “Shoot to Thrill” by ACDC is club music. If you’re not sure of information, don’t guess it. Either look it up online first, or simply don’t fill it out. I didn’t know the artists of several songs, and since I had no internet to look it up, I simply put in “Unknown” until I could find out. And don’t try to pass off your ineptitude as trolling. “Haha, I’m going to change the name of the artist and make the genre something exactly the opposite of what it really is! That will surely piss off a large chunk of people and produce lulz!” You’re not fooling anybody, dumb ass. If that’s really your idea of trolling, you’d better lurk on Encyclopedia Dramatica for a while until you realize what a dipshit you are. Seriously, what kind of OCD-ridden freak gets bent out of shape over improperly labeled music?