Skip to content
HomeTech/InternetOpenShot is a slow, buggy, unusable piece of shit 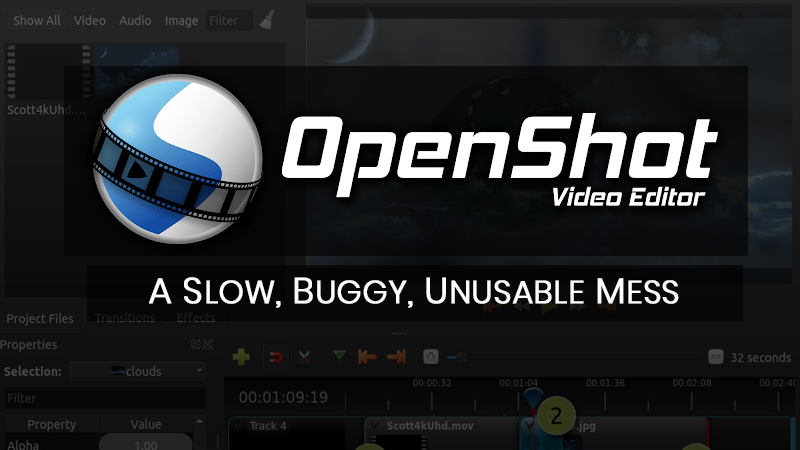 My experience using OpenShot was terrible. Before you torture yourself with this software, read this first.

EDIT: Wow, this is my top article? A half-cocked rant about a terrible piece of software? Don’t hesitate to check out the rest of my content, there’s so much more than this!

I’ve never had much luck with video editing software. For the longest time I would generally attempt to pass any video editing stuff I needed done for the site off to one of my friends. I tried Adobe Premiere, Camtasia Studio, even Windows Movie Maker. My success in even doing the most mundane of video editing tasks was limited.

With my recent foray into the worlds of Twitch and YouTube, I figured it was finally high time to learn to edit my own videos, and not always be reliant on my friends to do everything for me. A few people recommended a program known as “OpenShot“. The interface looked simple enough, it was free, it did everything I wanted a video editing program to do, and most importantly, it was free. I installed this program and began working on my latest video endeavor, “WIT Gaming – Emily Wants to Play”.

The interface is slow and clunky.

The first thing I noticed was how slow the program was. Any action involving the timeline took tedious amounts of time. Dragging clips around the timeline was comparable to trying to push a broken-down van uphill. Often the program would hang or stutter as I attempted to line up added audio or video. The further progress I made, the longer the hang time. The only workaround I could find was to restart the program, and even that was only temporary. Within 10 minutes I found myself facing the same issues again. Having to restart the program every 10 minutes just to get anything done was torture.

Resizing or re-positioning an image was a crapshoot. Whenever I clicked an image and begin dragging, I found that the image simply didn’t want to budge. So I would click and drag again, and kept doing it until OpenShot decided it wanted to listen and try to actually move the picture. A broken-down van is really the perfect comparison for OpenShot, in that the interface is clunky and very hard to move. The resize process was anything but smooth, the program often stretched images in every which way except the way I wanted and took the patience of a saint to work with. 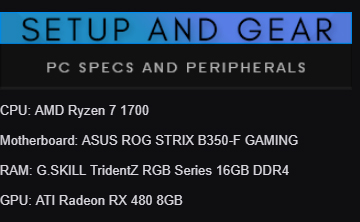 I wanted to rage at the dev team of this program for releasing such a shoddy program, but apparently it’s just one guy doing all the dev work by himself with a handful of volunteers contributing code here and there. Jonathan Thomas has clearly put a lot of time and effort into this program, and I have nothing personal against him. I just wish he would fix this glaring issue that’s apparently been plaguing this program since its conception.

I suspected an issue with the memory caching, so I attempted to look further into this problem using Google. I came across an entire Github community for OpenShot. Already irritated from the issues the program was giving me, my rage dial was turned up past 10 when I saw what was happening on the Github community.

Apparently the developer had appointed one or two people to monitor Github for him, in particular a user who goes by the name “Dylan C.” The C obviously stands for “condescending”, because that’s what Dylan is. Floods of users reported similar issues to my own, and their reports were all locked by Dylan. His condescending attitude towards people reporting issues would have made him fit right in on the WinAmp support forums, or on XDA. I screencapped some of this jerk’s best posts: 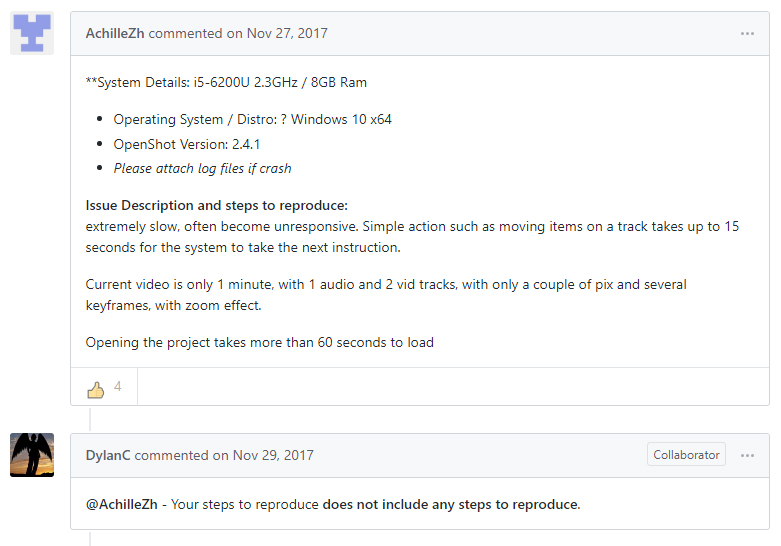 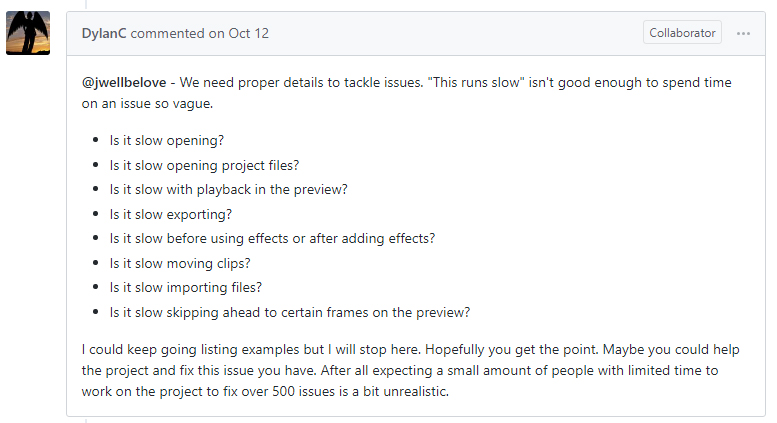 But why was Dylan locking everything and trying to sweep all the bug reports under the rug? Well, to quote the man himself, there were just too many of them: 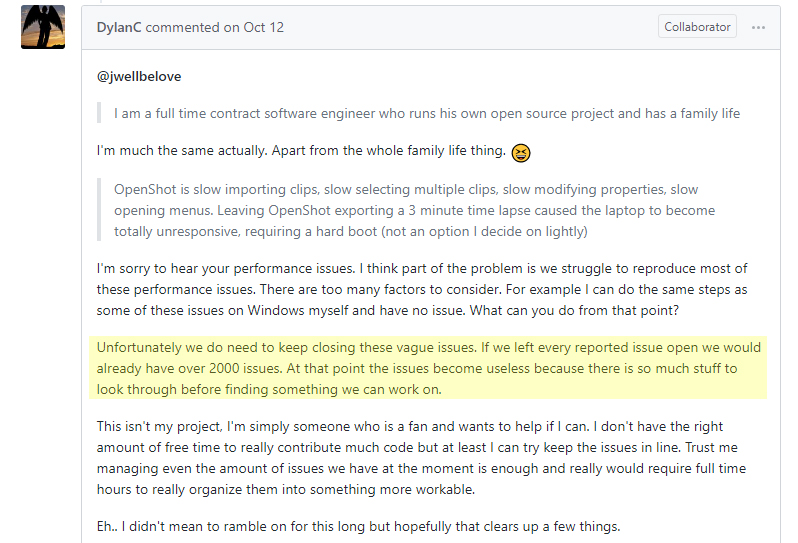 Hey jackass, if hundreds of users are complaining about the same thing, there’s a good chance it’s a legit problem and should probably be prioritized. You can’t just keep locking bug reports and hope they’ll go away. Does Jonathan Thomas know you’re doing this? Does he know that you’re being a snarky dismissive jerk towards his users? If I was a dev and one of my volunteers was treating my users this way I’d toss his ass to the curb with the rest of the trash so fast his head would spin. Dylan C. is a douchebag, and needs to stop trying to bury what is a very legitimate complaint about OpenShot.

My message to Jonathan Thomas is this.

I tried to like OpenShot, I really did. When it didn’t choke up, it was great and did exactly what I needed. It was easy to use, and the layout wasn’t a cluttered mess of bullshit like Hitfilms. OpenShot has great potential.

Unfortunately, I just can’t work around the lag on the Windows version. I know you’re just one person, and your primary Github volunteer seems to be too busy taking snips at people to actually be of any use to you. I ask that you prioritize this lag issue and make this program the powerhouse that it can be. OpenShot has potential. Stop squandering that potential and fix this. You have the brains to make an otherwise great program, now use them and make it not lag to high hell.

To anyone thinking about using OpenShot as it currently is, my advice to you is don’t. If you’re looking for some alternatives, I’ve heard good things about ShotCut. If you’re willing to spend money, Sony Vegas is actually pretty solid. I was able to get an older version of it on a Humble Bundle deal for $10, and it works great. Look around, you may be able to find a deal on it. But whatever you do, do NOT use OpenShot. Otherwise you’ll be ripping your hair out in frustration.

Feel free to share your OpenShot horror stories in the comments section! Myself and many others would enjoy knowing that we aren’t alone in hating this program.