A few articles back, I wrote about Slowskis, a plague that blights America’s roadways.

If you haven’t read the article yet, I suggest you go fuck yourself. Or you could just click the link in the first sentence and read it, that works too I guess.

That article only touches the tip of the cock that is the problem of stupid bullshit on the road. This time, I’m going to stroke the shaft and work the balls (it’s not gay if there’s a basketball in the room). In list format of course, since I’m fucking lazy and list format articles are easy to write (right Cracked?).

Give it 10-15 years and cars will no longer have turn signals, instead making the driver rely on their latent psychic powers to predict whether or not the asshole in the lane next to them is going to get in front of them.

Seriously, I feel like I’m the only person on the fucking road who knows what a turn signal is and how to use it. My favorite is when I come to a four-way stop sign with someone facing me in the opposing direction and I start to go, but the other person starts to turn in front of me with no signal. Hand gestures abound as the other person attempts to blame me for impeding on their signal-less left turn. And while we’re on the subject of four-way stop signs…

A Canadian Standoff is when two or more cars arrive at a stop sign at the same exact time, then each driver insists that the other driver goes first in an over-the-top display of politeness.

This shit happened to me just the other day on my way to work: 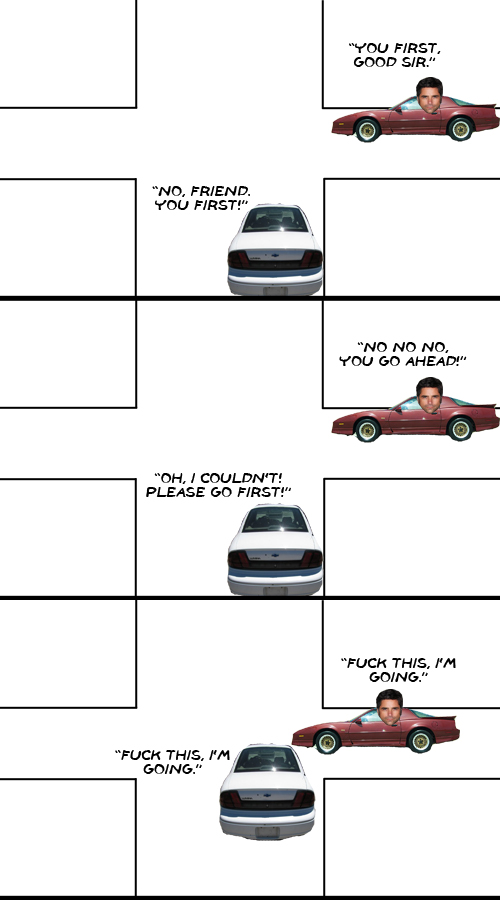 This kind of thing happens constantly in the city, and at night it’s even worse. I’ll get to a stop sign at the same time as someone else, flash my highbeams once, wait a second for them to go, flash them again, wait another second, other person doesn’t respond, I start to go, the other person suddenly wakes up and tries to go, forcing me to slam my brakes while they wave their hands wildly like it’s my fault they’re a fucking idiot.

3. Two way streets that only have enough room for one car.

Nothing like going down a street marked as two-way, only for another car to come down the opposite way and neither of you have room to pass each other. Then it becomes a game of chicken. Who’s going to move first, you or the asshole in the Ford F150? Here’s a hint, it’s not the asshole in the Ford F150, who will gladly crush your puny Chevy Lumina with his giant metal monstrosity (built Ford Tough™). Your only hope is that there’s an open area to pull aside to, otherwise you’re backing your ass up back down the street.

In Philly we have a lot of these kinds of streets. My best guess as to why they exist is that most houses here have driveways in the alley, so people were expected to park there and not on both sides of an already-small street. Rather than simply turn the street into a one-way street, the city forgot and neglected it like it does with all of its pothole-ridden snow-covered roads. “We just don’t have the money!” Yeah, sucks being broke, doesn’t it?

And it’s no wonder. There must be some unspoken rule that whenever one is driving past road work all the workers are always standing there staring blankly at traffic. I’ve heard this is some kind of union regulation that requires one person doing work to have like two or three people watching them, which wouldn’t surprise me since unions tend to be good at making things needlessly impractical while actually doing jack shit for the workers they supposedly represent. As long as your pockets get fatter, right you greasy dago bastards? I support the right of the workers to band together for their common benefit, but fuck unions.

Whatever the cause, it’s frustrating as all fucking hell to deal with the same construction project congesting traffic every single day for over a year, only for them to abandon it or to find out it was for something dumb like a new handicap ramp for the curb.

5. Assholes who tailgate and flash their highbeams.

This kind of douchebaggery is actually more common than you think.

Yesterday I was on the highway heading back from the bar doing charity work when some faggot in a Chevy Lumina got behind me. Because of a Neverending Construction Project, traffic was forced into two lanes instead of the usual three. The jerk-off driving the Lumina was apparently in a really big hurry to get to the next red light, because he began tailgating me. No big deal, I’m used to assholes like this. But then, he decided to flash his highbeams at me. Seeing as we weren’t at an intersection having a Canadian Standoff, the only logical assumption here was that he was attempting to signal me to move out of his way.

So an opening appeared in the lane next to ours and he switched lanes, hoping to pass me even though traffic was congested in both lanes. I guess it was his way of saying “Fuck you for not moving for my Almighty Chevy Lumina”. It’s on like Donkey Kong motherfucker. He got alongside of me, putting his signal on and preparing to swerve dangerously in front of me. Nope, denied. I sped up so he couldn’t get in front of me, and he was forced back behind me.

Exactly who the fuck are you buddy? That’s right, nobody. You’re just some pencil-dicked faggot driving a shitty Chevy Lumina who thinks he matters. Seriously FYF, fuck you and fuck your gay ass piece of shit car you Reddit-loving chodelicker. Nah I’m just fuckin’ with ya buddy. But you’re still not allowed to come back to the forum.

Really though, fuck that driver. I hope he hit a light pole or something.

Another unspoken rule of city driving is that people who drive panel vans, box trucks, and even school buses must always park their vehicle at the corner of alleyways or intersections, obstructing the view of oncoming traffic and leaving people coming out of said alleyways or intersections to basically punch-and-pray. As in, punch the gas and pray you don’t get blindsided by an oncoming car because you couldn’t see past McFaggot and Sons’ giant windowless white van.

Seriously, who fucking parks a school bus on a residential street? A fucking asshole, that’s who. If you drive a school bus and you park it on a residential street during off-hours you deserve to have your face beaten in. By my fists. What kind of busing company lets their employees actually take the buses home with them anyway? That’s fucking stupid. Fuck you and your big gay cheese bus, keep that shit off my side streets during off-hours.

There’s a war that’s been going on for decades now, and it’s time to take a side. I’m talking about the eternal struggle between cyclists and motorists.

Cyclists know their rights, namely their right to cut right in front of you as you make a right turn. They operate with a “Pedestrians first” mentality. Which is fine, except they also expect the same rights at motorists. Like the ability to ride in traffic when they can’t keep up with the speed limit. If you can’t peddle your bike 30 MPH, you need to get the fuck off of the road and ride on the sidewalk like normal people. I once got stuck behind some dipshit who thought he had the right to ride in the middle of the steet doing less than 10 MPH when the limit was 30 MPH. And by “stuck behind”, I mean I went around his dumb ass while he made all kinds of angry hand gestures while yelling shit I didn’t hear because I was busy listening to Dave Mustaine shred his guitar.

Get off your high horses, cyclists.

All I have to say on this one is, it’s fucking dumb that I’m expected to wear down my brakes goings 15 MPH downhill to preserve the lives of some little punk ass teenagers that literally throw themselves in front of traffic and challenge you to hit them. I would have absolutely no problem obliging, except my car is worth way more than the collective lives of every student in the school. I wish those kids were adopted by Chris Benoit.