When it comes to the Twilight series, it’s the same fucking thing everywhere I go.

Over and over, people are parroting the same cliche opinions about these books and movies. “Twilight sucks!” “Twilight is gay!” “Edward Cullen is a faggot!”

We get it, Twilight is shitty.

Yeah, I’ve heard enough about the series to have a simplistic understanding of the plot, and I’m not really too confused about why it has such a huge fanbase. It has teenage heart-throb vampires and werewolves falling in love with average human girls. It appeals to its demographic: 10 to 17 year-old girls.

What I am confused about however, is why anyone who doesn’t fit Twilight’s intended demographic would even bother to read the books or view the movies, let alone have any expectations of quality regarding them. I hear all these idiots saying shit like “Bram Stoker is rolling in his grave!” and “Twilight is gay!” Man, just shut the fuck up with that shit. These people are more annoying than the fans.

Really, it’s fucking weird to watch a bunch of grown men sit around discussing how poorly done some books or movies made for teenage girls were. It’s a series of fucking romance novels written for little girls, you faggots. Of course it’s going to be fruity. Of course it’s going to be poorly done. And to critique it against the time-tested work of a classic author? Are you people for real? “Twilight’s nowhere near as good as Bram Stoker’s ‘Dracula’!” No shit? Gee, thanks for the tip Captain Obvious! I never would have figured that some teenybopper romance shitfest was inferior to the works of a Victorian-era author. Next you morons will bitch that J.K. Rowling is inferior to H.G. Wells (the greatest author to ever live, alongside Mark Twain).

If Bram Stoker were alive today, would he really give two shits about the latest craze amongst teenage girls? Well, I was pretty curious myself, so after drinking an entire bottle of Captain Morgan and periodically paying attention to one or two episodes of “Supernatural”, I decided to summon the late author from the dead to find out. I needed some help from one of my friends who is into that shit, Rotten Tom’s girlfriend, SHARRRRONNN!. Here’s what went down:

SHARRRRONNN! draws some symbol that I was too drunk to remember. She says some words.

Rotten Tom laughs. I get up to go pee, but suddenly the lights go out and a ghostly apparation appears before me.

Me: Woah, what the fuck man!

After a moment of awkward silence, the truth finally hits my drunk ass. I run for Rotten Tom’s door.

Rotten Tom: Hey AJ, I thought you wanted to ask Bram Stoker a question about Twilight.

SHARRRRONNN!: Yeah dicker, get back here!

I turn around and stumble towards Bram’s ghostly figure.

Bram: Why in the hell am I here? Who are you people?

Me: I’m the goddamn Batman! (I point to my Batman shirt)

Me: Yeah? Well I may be drunk but in the morning I’ll be sober and you’ll still be dead. You just got Churchilled motherfuckaaaaaaaaaa!

SHARRRRONNN!: AJ, ask him about Twilight!

Me: Oh shit that’s right. Hey dude, you know what Twilight is? Like the books and movies and big gay vampire Edward Cullen and shit? (I fold my t-shirt to look like a bra) “Ooh, look at me, I’m Edward Cullen, the big gay vampire. Grrrr! I will suck your blood! Grrrr!”

Bram: Oh, those books written for little girls, yes? What about them?

Me: Uhhhhh, some people think you’re like rolling in your grave and shit. Because they suck and stuff.

At this point, I stumble into a wall.

I turn to Rotten Tom.

Rotten Tom: Nah dude, you drank it all, remember?

Bram: Can I leave now?

Me: No fucker. I summoned you here because I had a question, assmunch. Now answer that shit. What do you think about this Twilight shit?

Bram: Sir, I am a grown man! I have no interest in a series of books and motion pictures made to be enjoyed by adolescent females. As the people of your era would put it, “I ain’t a fag”.

I bust out laughing, and fall on my face.

Bram: Well sir, if that’s all, I’ll be leaving now. Good day to you all.

I proceed to laugh like a drunken ass, before stumbling to a recliner and passing out in it.

Well there you have it folks. To sum up Mr. Stoker’s feelings on Twilight: 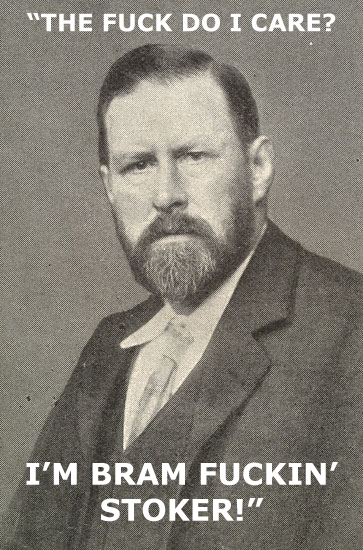