Skip to content
HomeMovies/TVYou are NOT a Jersey Shore character, now shut the fuck up 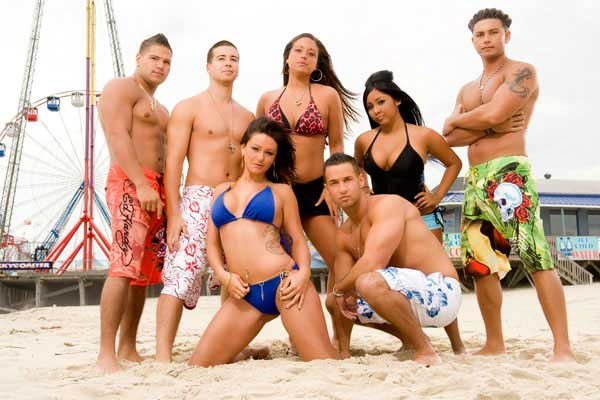 THIS IS NOT YOU.

I’m sick and tired of these stupid fucks who can’t watch an episode of Jersey Shore without feeling the need to parrot every annoying catchphrase spouted by faggots like “The Situation” and Snooki. Everyone knows someone like this. Some of you might even have the misfortune to actually be friends with them. They’re the assholes who are constantly posting shit on Facebook like the tard-croym “gtl” (Gym-Tan-Laundry for that envious number of you who don’t know), the ever-enduring monument to that faggot Michael Sorrentino, “We have a situation”, the this-was-actually-funny-until-I-found-out-it-came-from-Jersey-Shore series of “… she’s too young for you bro” jokes, and my personal favorite, “lez be honest”, which came from an episode where two of the sluts were doing lesbian shit or something. And since I’m dying to post this picture, now’s as good a time as ever: 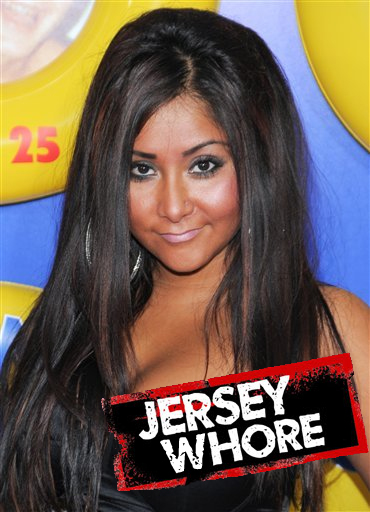 Only in America can an obnoxious whore become a national icon. And she’s not just any whore. She’s a Jersey Whore. Good job, Snooki. I know you worked hard to earn your reputation, and I’m sure you’re proud. Here’s a shirt in your honor: 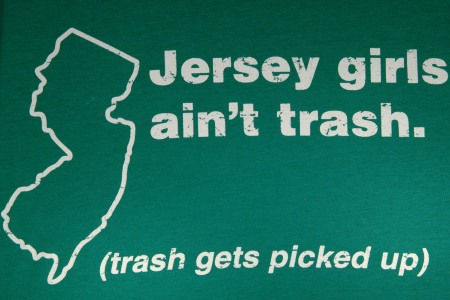 Fuck you Flickr for making it a hassle to take images from your site. You guys also win a prize: Faggots of the Year.

I can already see that vapid cunt sobbing tears at this article, and that steaming pile of shit “The Situation” foaming in anger as his pea-sized brain attempts to assist him in mashing the keys to form an angry hatemail calling me a coward who hides behind a computer screen, and threatening to kick my ass. I admit it, I’d probably lose a fight with the Situation, mostly because of my policy against hitting women, no matter how butch they may be.

I already did an article on this stupid show a little over a year ago. Frankly, this show didn’t even deserve that much. The only thing this show and its cast deserves is to die in a terrorist attack. I wish al-Qaeda crashed a plane into the set of Jersey Shore instead of the World Trade Center, and the only survivor was the Duck Phone, which even the most hardened of critics can agree is way too awesome for this show. I’m getting tired of seeing my Facebook newsfeed being blown up with idiots saying shit like “wah” all the time. The amount of influence that this show has over people is disturbing and infuriating. Thinking of hitting the gym to get back in shape? Have fun choking on the smell of hairspray and dealing with all the juicehead faggots that the Jersey Shore Cloning Machine has spewed out.

I’ll concede though, fistpumping is pretty awesome. Some awesome places to fistpump are:

Sadly, the only places people seem to do this are in nightclubs. Or so I’m told. The day you see me in a nightclub is the day I break your face for attempting to slander my good name by lying, because I’d never be caught dead in a nightclub. Nightclubs are for thugs, sluts, and guys who wouldn’t be able to get any if it weren’t for the existence of booze. My only experience with a nightclub went like this:

And that experience was still more interesting than any episode of Jersey Shore.

If I were on an episode of Jersey Shore, I’d probably call myself “The Predicament” and spend most of my time cock-blocking The Situation while taking hits from a bottle of Captain Morgan. I’d follow the cast around from club to club heckling them until I was so drunk that I ended up at the wrong club on the opposite end of Seaside Heights. The bouncer would refuse to let me in, and I’d take a half-assed swing before falling flat on my face and passing out on the ground. The camera would show the rest of the cast out partying and being assholes, periodically cutting to me passed out on the ground. One cutaway would probably show me farting, followed by the bouncer making a disgusted face and saying “What the fuck, did he just shit himself?!” But then later we find out I didn’t, and it was just a really nasty fart caused by me gorging myself on Taco Bell before going out that night. Another cutaway might show my phone ringing, and the bouncer jamming along to Alestorm’s “Keelhauled”. Then in the after-credits scene, I’d wake up briefly to look at my empty bottle and drunkenly say “Why’s the rum gone?”, before passing out again.

I’m getting away from the subject here. The point is, people who incessantly quote Jersey Shore are annoying idiots, and every time I hear or see somebody saying “Wah” or “Lez be honest”, I want to have them sterilized. If I ever amass an army and create an Empire of the Phoenix King, these people will be pretty high on my list of groups to authorize genocide against. Most likely before people who use the word “itch” to describe scratching an itch, and after crackheads. It’s not funny, it’s not cool, it’s fucking annoying. Just cut that shit out already.