Skip to content
HomeMusicListening to music on the radio sucks

I fucking hate being forced to listen to the radio.

UPDATE: 9/14/19 – This article is old as shit, but not as old as Debbi’s career. As such, I want to sincerely congratulate her on her retirement, and thank her for her contributions to Philly’s radio scene. She might not be as good as  legends like John DeBella or Pierre Robert, but I can’t ignore her history with the city and its radio stations. From us fine folks at AJnet, best of luck to you Debbi. Also, I was young drunk and stupid when I wrote all that stuff about you, so find it in your heart to forgive me.

Between the shitty music, the annoying-as-fuck DJs, the ridiculously short playlists, and the obnoxiously retarded commercials, it’s like a gangrape of bullshit.

Whoever came up with the idea for radio playlists needs to have their throat slashed, plain and simple. “Hey, we should play this song at this time every day!” If I’m able to forgo the use of a clock in favor of using a radio station’s playlist to determine what time it is, it should be obvious that someone fucked up. No, seriously, at my old job we didn’t have a clock in our kitchen, and I was able to determine the time by what song the classic rock station, 102.9 WMGK, was playing at the time. Everyone else thought I was some kind of psychic, but in reality it was as simple as the song on the radio. “A Day in the Life” is playing? Then it must be about 9 AM. “Hit Me With Your Best Shot”? It’s 10 AM. “Freebird”? Time for me to unload a round of buckshot into the radio. I fucking hate that song.

The absurdly small amount of songs that the stations play is annoying. I used to really like the Beatles, until I grew tired of hearing the same three or four songs by them all the damn time. It was always “A Day in the Life”, “She Loves You”, “A Hard Day’s Night”, and once in a while “Eleanor Rigby”. Now, “A Day in the Life” sends me into a fit not too much unlike a Vietnam veteran. I loathe the local pop station, Q102, with a passion. They have, no shit, two-hour playlists. Seriously, their playlist is two fucking hours long. I’m not a religious man by any stretch, but I pray to God that the creator of Q102’s playlist contracts the most painful form of cancer not known to medical science, and suffers a slow painful death over a period of 10 years.

The DJ at WMGK pisses me the fuck off left and right. Debbi Calton is quite possibly the biggest cunt on the airwaves: 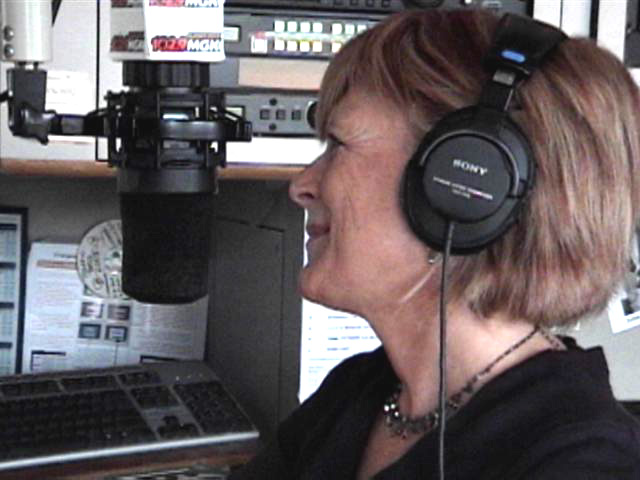 If Hell had a radio station, this bitch would be its only DJ.

This stupid whorebag is one of the most condescending people on the radio (Philly people: Yes, Howard Eskin is by far the most condescending person on Philly’s radio stations, but I think we can all agree that he makes it look good when he does it). One time, she was taking requests for songs. Usually people call in and request the same shit songs all the time, and I’ve always suspected that it’s only one male and one female doing the calling every day, since all of the callers sound strangely alike. This time however, a different guy miraculously slipped past the screeners and requested some song that they didn’t normally play. Debbi Calton replies “YAWN, HOW BORING. HOW ABOUT SOMETHING ELSE?”, then hangs up on the guy and proceeds to play one of the songs on their bullshit small playlist, making jokes about how the guy probably thinks she’s a bitch. Well I for one don’t think Debbi Calton is a bitch. I think she’s a fucking cunt. I was talking to my father at a later point and mentioned this. He agreed that she was a cunt, and told me about this time when he was younger and the station was having a Beatles marathon where they were playing all the Beatles songs from a particular era. The station told listeners to call in if there was a song they forgot, and they’d play it. There was one they forgot, so my father called in to alert them to what he believed to be a travesty (he’s a pretty big Beatles fan). Debbi Cunt-ton was the one who answered the phone, and tried to argue that the song wasn’t on the album. My father called bullshit, because he had the album right in fucking front of him. In the end, Debbi Cunt-ton did what she does best: Bitch at the other person, then hang up on them. Why WMGK thought it would be a good idea to put a cunt like this on the air is beyond me. Probably some equal opportunity bullshit. Kick this cunt to the curb with the rest of the trash and get someone who isn’t a total fucking bitch.

Everything about the radio sucks, right down to the commercials. Gone are the days of semi-amusing characters and catchy jingles. Now we have assholes yelling their products to us, yuppy-sounding faggots talking to us like they’re our casual acquaintances, and companies simply changing the lyrics of popular songs to promote their product. I’ve heard the song “La Bamba” modified to advertise Honda, Toyota, Nissan, Kia, and Chevy, all with the same “You could be driving a (car name)” format. Jesus Christ, talk about unoriginal. Remember “WAZZZZUP”? That was some funny shit, mainly because it pissed everyone the fuck off. Motherfuckers were doing that shit anywhere and everywhere, even when it wasn’t relevant. My teacher would ask the class “Can anyone tell me what five times five is?”, and some kid would reply “WAZZZZZZZZUP!”. Me and my friends used to prank call each other with that shit all the damn time. If I ever catch someone singing “You could be driving a Honda/Toyota/whatever”, they’ll be beaten mercilessly and brought to the brink of death. Then as they lay there dying, they’ll have to listen to the jingle on loop until the last breath of life leaves their body.

Also, not having to hear another Gary Barbera commercial ever again would be nice.

UPDATE: Debbi Calton of WMGK responded to my criticisms of her. Read the exchange here.