Why would anybody mourn this boozed-up sleazebag? 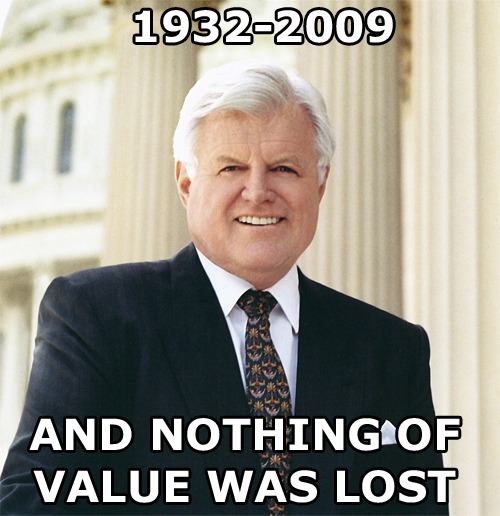 Actually, what I’d like to know is, why would anyone elect him to so many damn terms in the Senate? He served 9 terms as a senator. That’s 47 years this guy held political office. Did people vote for him just because of his last name or something? Probably the same people who make JFK out to be the greatest president ever. Does anyone remember anything notable that JFK did other than get his head blown away by (insert any organization here)? What about anything JFK did? No? Didn’t think so. Now take his decayed dick out of your mouths please.

Ted Kennedy should never have been reelected after the Chappaquiddick Incident. For those who don’t know, Ted was at a party cheating on his wife (in typical Kennedy fashion) when he decided to take a drive with one of the girls he was messing around with. He was most likely drunk and drove his car off a pier, leaving the girl to die while he swam to shore. Ted didn’t report anything to the authorities until the next day when the body was discovered. He then went on TV giving some half-truth sob story and feigning sadness. The retarded people of Massachusetts ate it up and continued to reelect him for the rest of his life. He only received two month’s jail time, which was “suspended” (i.e., he didn’t have to serve it). What a crock of shit! If I drove off a pier and left my girlfriend to drown, the media would be howling for my blood and I’d do at least 5 years with no chance of parole.

This asshole is dead, and I’m glad. Now he can’t to try to pass any more anti-gun legislation. This guy was so opposed to the 2nd Amendment, even Joseph Stalin said “Damn, chill out with that.”

The cancer died of cancer. Oh the irony. Good riddance you fucking slime.