I managed to get a free bootleg copy of the new Spider Man movie, and all I can say is I’m glad I didn’t spend anything to see it.

The movie was absolute trash. I will save you 10 bucks and ruin the ending for you:

Now you can thank me for saving you money. You can use that $10 to put it towards buying the Back to the Future Trilogy on DVD. Now that was a good series of movies. Even with using similar scenes over and over again, it still managed to pull it off.

Spider Man 3 sucked so much ass, it shows up that guy at your office. You know, the guy who’s always complimenting the boss, while sneering at you because he thinks the boss likes him, but in reality the boss thinks he’s a douchebag.

People liked this movie enough that it set some kind of box office record or something like that. I don’t know, nor do I care. It’s kind of like a dinosaur turd. Everyone’s fascinated by it, but it’s still just a piece of shit. Wow, I’ve gotta write that one down.

Okay, now that that’s settled, let me tell you WHY it sucked.

First, when Peter Parker became “Dark Spidey”, he decided to wear his hair like a lame ass Emo: 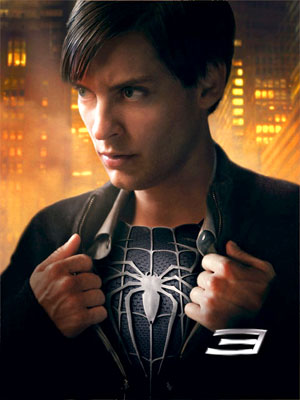 Am I watching a super hero movie, or am I at a fucking Fall Out Boy concert? Seriously. The whole movie might as well consisted of Peter cutting his wrists, then updating his MySpace blog about it, complete with pictures of the scars. Then, he would have overdosed on Nyquil, and we wouldn’t have to suffer through another shitty sequel.

And what the fuck was with him dancing down the street like he was in a Pepsi commercial? It was so pathetic, I was embarrassed to even be watching it.

After fixing myself up with some green apple vodka and tonic water, I pressed on.

The movie was basically just special effects, and nothing more. I’d rather watch 2 hours worth of a dog fucking a cat in the ass than subject myself to this piece of shit. At least the cat and dog have better dialogue, and probably a better story line. I want to beat Sam Raimi over the head with a fucking rake.

If I wrote the movie, here’s how it would have gone:

Spider Man’s new enemy would have been a giant penis, named Dr. Dick. He would be played by Fox Sports announcer Howie Long, because he looks like he’s the biggest dickhead in the world. I would have a cameo as Dr. Dick’s tailor. My only line would be “Needs more room in the crotch”.

After the screen goes black, a gang of black dudes would go through the audience and dip everyone’s pockets. But by now you’re used to being robbed, as Hollywood robbed you of $10 to see this atrocious piece of shit.

Don’t see this god-awful movie. I’m serious. If you’re really that curious, wait until the movie is out on DVD, then download the torrent. Don’t spend even a penny on this pathetic piece of shit.