Remember when Nelson Mandela died in prison back in the 80’s? Or Billy Graham’s funeral? Or that time when Jerry Lewis died?

No? That’s because none of those fucking things happened.

The reason people have these false memories is because these kinds of things happen all the time, especially when it comes to celebrity deaths. The mind can easily take something you saw once on a TV show or a movie and meld it with current events, people, and other things to create a realistic memory of something that never actually happened. You can even have realistic dreams that might deceive you into thinking they were actual events.

Most normal people will accept their mistake when corrected about their misperceptions and false memories, but in the bowels of the Hell that is the internet, there exists a surprisingly large amount of people who believe that there is something more at work, something that absolves them of their mistakes. I’m talking about these idiots.

Over at Mandela Effect (named after a common false memory people seem to have of Nelson Mandela being dead), it is suggested that people don’t have false memories. According to Mandela Effect, what is actually happening is history is being edited. No, I don’t mean history books are being filled with false information. History itself is literally being tampered with.

Mandela Effect nor any of its commenters can seem to adequately explain exactly what is at work here, but there seems to be a consensus on the involvement of parallel worlds being involved. Obviously someone has been fucking with the Einstein-Rosen-Podolsky Bridge. I bet it’s those pesky Kromaggs, gearing up for an invasion: 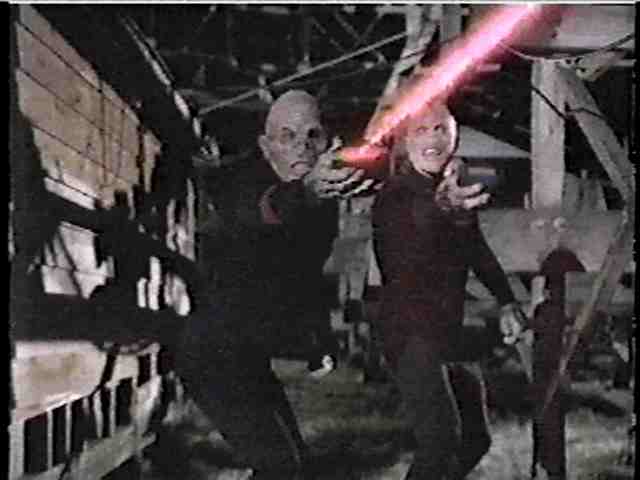 Have no fear, I’ve alerted Quinn Mallory and the gang.

With the reference to “Sliders” out of the way, the idea is that what we are experiencing is our universe’s own history being overwritten with bits and pieces of the histories of other universes. Nobody seems to have any idea who or what could be causing reality to change, except for a few people who suggest that it’s the result of the other universes coming to an end.

Geography isn’t exempt either. A common example of alleged reality tampering is the location of New Zealand. There are droves of people who remember New Zealand as being on the left of Australia. New Zealand is pretty fucking irrelevant even to the five people and ten thousand sheep that live there, so the idea that people wouldn’t remember its exact location isn’t farfetched. Though I can’t say I ever remembered it being anywhere but where it currently is. Mandela Effect also mentions the location of Sri Lanka, claiming that many people remember it being directly south of India when it is in fact south-east of India. The site then goes on to post a series of old maps, the oldest dating back to 1535 AD. Bizarrely, they’re trying to attribute the 1535 map to Claudis Ptolemy, even though he had already been dead for around 1,400 years. I can only assume that the author meant that the map was originally done by Ptolemy when he was alive, and reprinted in 1535. Hilariously enough, the maps only serve to refute the point Mandela Effect is trying to make.

Celebrity deaths and geography aren’t the only things susceptible to tampering, apparently. There exists a large and ever-increasing group of people who insist that the popular series of children’s books, the “Berenstain Bears”, is a victim of said tampering. According to this very vocal group, the title was actually “Berenstein Bears”, with an “e” instead of an “a”. Reality itself was changed, and now all references to the title having an “e” in it were scrubbed in favor of a new spelling, except for the droves of idiots commenting on Mandela Effect with “OMG I thought I was the only one! I always called it ‘Berenstein Bears’, and so did everyone I knew!”. Because it’s not like anyone pronounces anything wrong, especially children. These people are both cocky and stupid.

First of all, almost everyone I knew pronounced it as “stein” instead of “stain”. That includes other kids, teachers, and even my parents. I even did too for a little while, until one day a 5 year old me looked and saw that there was an “a” instead of the “e” that everyone else pronounced. The name stuck with me from then on purely because I thought it was weird that someone would have the word “stain” in their name when “stein” was so much more common. Was I the victim of reality tampering? No, just the victim of being an intelligent kid surrounded by fucking morons who never realized their mistake even into adulthood.

Second of all, there is a very simple explanation for why so many people would remember it as “stein”. When reading, the human mind processes shapes rather than the actual letters themselves. An “a” and “e” look very much alike, especially in the font used for the title of the books. Look at this cover I found: 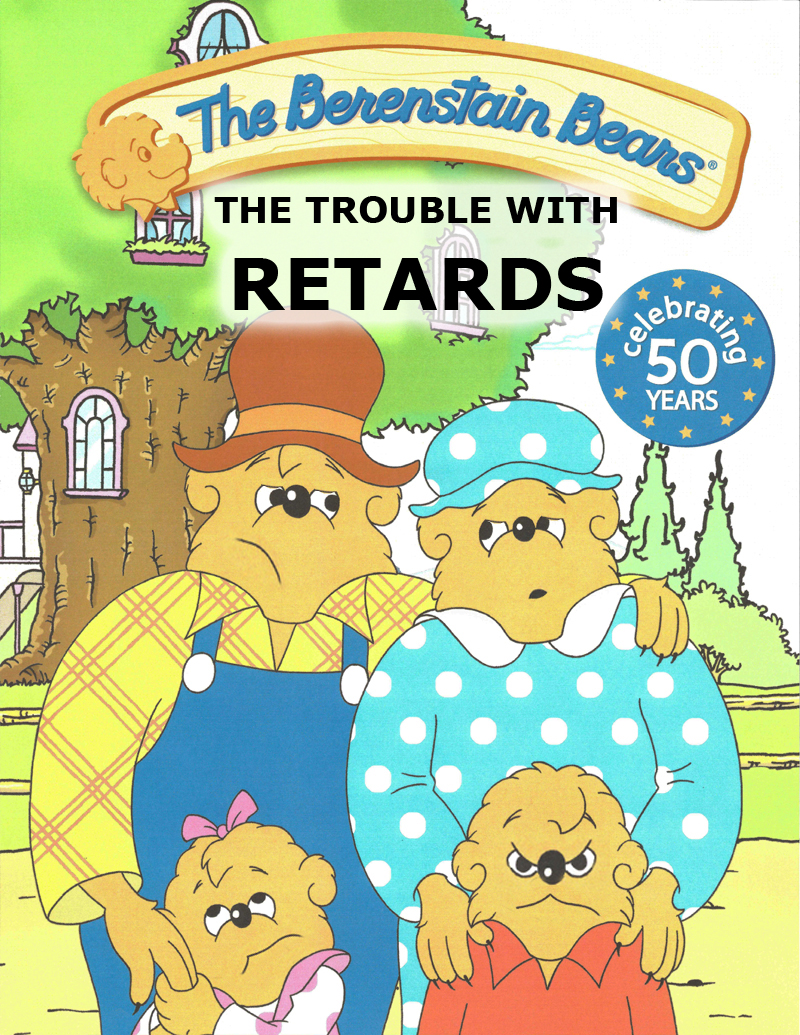 Now picture a disinterested parent reading their kids this book, or a young child reading this. Of course they’re going to see “stein” instead of “stain”! And as I was able to realize at the age of 5, it’s much more likely that someone would have “stein” as the last part of their name instead of “stain”. I remember the books. I even remember the VHS cartoon series. For Christ’s sake, they say “stain” in the fucking theme song like 8 times.

The worst part is, this shit is actually gaining traction. Internet message boards are filled with people who swear up and down that their memories are not skewed, and that reality has glitched or been changed to contradict their long-held belief that they are the “Berenstein Bears” and not the “Berenstain Bears”. Stupidity is contagious, folks. If enough people are wrong about something it eventually becomes right. Maybe I should start a conspiracy theory that I’m the ruler of the world and eventually if enough people think it’s true I’ll actually be ruler of the world. All hail the Phoenix King, motherfuckers.

As if someone fucking with history wouldn’t have anything better to do than move shitty irrelevant countries or change the title of a series of books: 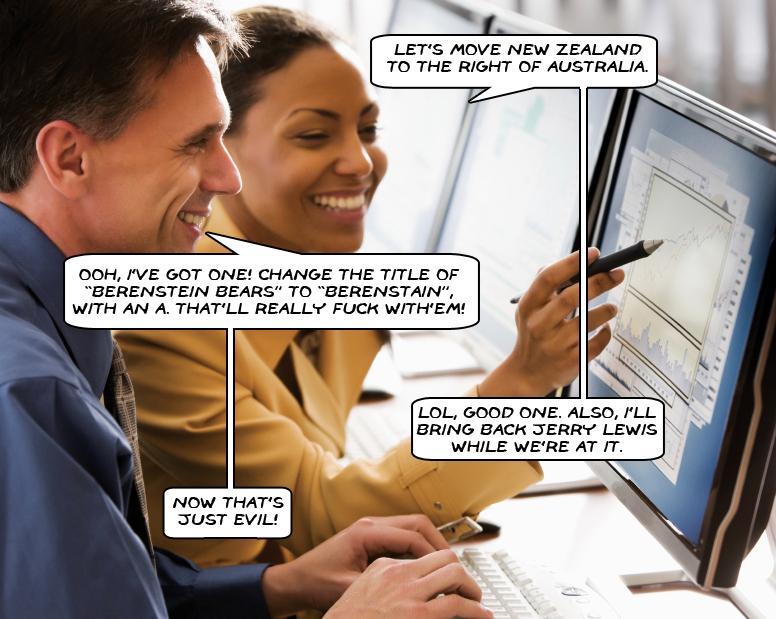 That chick is totally a Kromagg. I’d still hit it though.

The idea that aliens are visiting Earth and governments have been in secret contact with them for decades? Outlandish. The idea that the world’s wealthiest people are conspiring together in secret to rule the world? Fucking crazy. Reality being tampered with to change the title of a children’s book? Yeah, sounds legit. Seriously, you people will believe this bullshit but you look at me like I have two heads when I say that I think the government is covering up alien visitation or that the Illuminati is real? Go fuck yourselves.