Philly sports fans were highly disappointed that the Eagles didn’t go to the Super Bowl this year. I wasn’t.

The other year the Eagles DID go to the Super Bowl.

And when they did, things got retarded.

We had drunks going up and down our street screaming the Eagles’ Fight Song at the top of their lungs.

For those oblivious to this musical disaster-piece, here are the lyrics:

This is the typical Eagles fan: 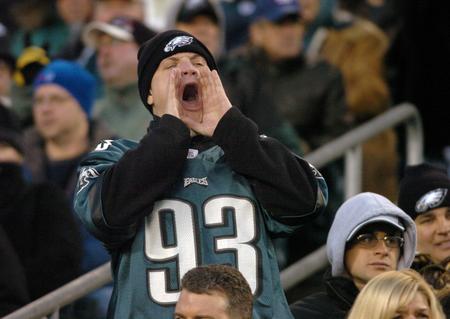 So I went out and joined these morons. Except I sung my own version of the song:

Their reaction was hilarious. People were so drunk that they couldn’t figure out who was singing it. All they heard was someone dissing the Eagles, and boy were they pissed. It was fucking anarchy. People started beating each other, accusing each other of treason and shit. I slipped away from the crowd, chuckling to myself like the master ruse man I was.

The riot squad broke things up within 15 minutes, and I was able to sleep unimpeded.

People in this city would riot simply because they’re retards (EDIT FROM THE FUTURE: Hoo boy…) and take a sport way too seriously. Imagine a soccer riot in Europe. Now imagine that riot being full of drunken Irish-Italian fat asses with big mouths. Chaos times a million.

And let’s not forget about the Eagles’ rivalry with the Dallas Cowboys.

I heard this guy went into a bar in Philadelphia during the Eagles-Cowboys game wearing a Cowboys jersey, and simply vanished into thin air.

Just kidding. I don’t have friends. But if I did, we would have totally thrown rocks at the Eagles fans, because any friend of mine would be more like a puppet who does whatever I say.

But I’ll never forget the time that I was banging my girlfriend in her basement and her fat whiny little brother came running down the stairs screaming about the Eagles winning the game. He saw me putting it in his sister and screamed. He ran up the stairs and told their dad. I ran out the back door and never saw my girlfriend again. Fucking Eagles. I’ll never forgive them for the case of blue balls I received from that.