Skip to content
HomeMusicThe 10 worst things about music in 2007 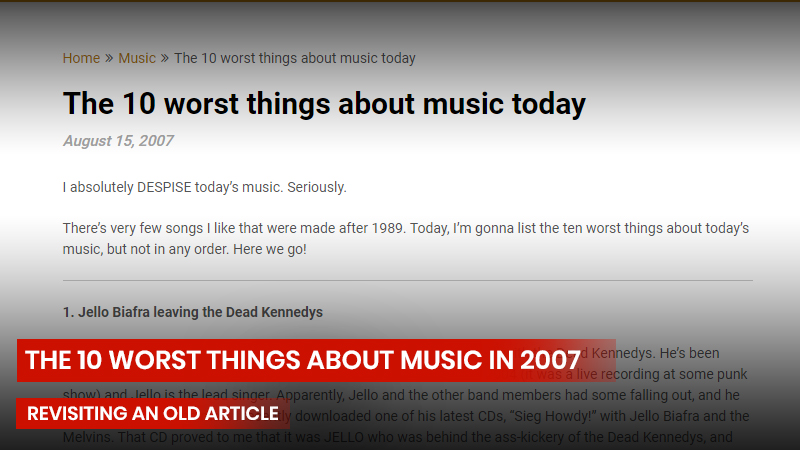 Sometimes I look back at my old stuff and ask myself, “What the fuck were you thinking?!”

Way back in the site’s first year, I wrote an article titled “The 10 worst things about music today“. In this poorly-written article that definitely was written under the influence, a 20-year-old me railed against the biggest problems with music in the year 2007.

During a period of boredom I decided to reread some of my old content, and came across this old article.

Did I really write this crap?

How misinformed I was!

14 years have passed, I’ve grown up, and I spend 90% of my day listening to Spotify. I figure it’s time to open the time capsule and revisit this article to not only pick apart everything wrong with the article, but also to see just how much my taste in music has changed.

For the record, this isn’t the first time I’ve retracted my musical opinions, as anyone who remembers my “Shitty classic rock” article will know.

At least I admitted that I was an idiot on this one.

For whatever reason I had been unaware that Jello Biafra had left the Dead Kennedys in 1986, about 21 years before this article had been written. I also felt the need to include this event in an article about the worst things in music in 2007. How contemporary of me.

Not only that, but I was mystified by the idea that a Dead Kennedys album with Jello on it could be released in 2004 despite Jello leaving the band in ’86. I knew nothing of the lawsuit that led to Jello losing the rights to most of the Dead Kennedys’ music, I didn’t understand the concept of an album of a live performance being released years later. Never mix painkillers and vodka, folks.

I’m not sure why I attacked Simple Plan in this one, because even back then I actually liked a couple of their songs (namely “Addicted” and “I’m Just a Kid”).

This “complaint” was brought on by an argument I had with a teenage girl who insisted Simple Plan, Good Charlotte, and Avril Lavigne were punk. This girl was about 14 years old, and had never even heard of the Dead Kennedys, Black Flag, GG Allin, or any hardcore punk bands. A young, immature me had taken offense to the musical opinions of an even younger even more immature teenage girl, so much that it made me overlook an entire sub-genre of music and write a half-cocked rant.

While I’ll always take the Dead Kennedys over Simple Plan, Good Charlotte, or Avril Lavigne any day, I can’t deny that there are some good pop-punk bands out there. Blink-182, The Offspring, and Green Day are the best examples that come to mind, and I’m sure readers can think of many more.

Also, Avril Lavigne isn’t punk by any stretch, even if Let Go was a good album. Sorry Julie.

In this site’s early years, I talked a ton of shit on Green Day. I trolled a Green Day fan forum, turned an article that was meant to be about the Dead Kennedys into an article bashing Green Day, and slipped insults towards Billie Joe Armstrong and the rest of the band into various articles throughout the years.

I did all this while thoroughly enjoying the American Idiot album.

I’m still not entirely sure why I denied liking Green Day. I suspect it has something to do with an ex-girlfriend who obsessively loved the band and would constantly call Billie Joe “smexy”, which was some “lol hyper and randum” variant of the word “sexy”.

Green Day has a lot of great songs. Pretty much all of the American Idiot album is great, same with Dookie. Then you have songs like “Outsider”, “Ashley”, “21 Guns”, and “Good Riddance”. They’ve also done some really good covers, their latest album No Fun Mondays has excellent covers of pop classics like “I Think We’re Alone Now”, “Manic Monday”, and “Kids in America”. Then of course we can’t forget their phenomenal cover of John Lennon’s “Working Class Hero”, which is just as good as, if not better than, the original.

A lot of the hate for Green Day seems to stem from the fact that they brought the punk scene into the mainstream and commercialized the genre. This pissed off people like Johnny Rotten of The Sex Pistols, who felt that Green Day was bandwagoning and basically swooped in and claimed to be punk when they weren’t. Is he right? Maybe. On an interesting side note, Johnny Rotten later went on to do butter commercials.

I’d like to officially retract all the bad stuff I said about Green Day. They’re a solid band with good music. Unlike my ex, who is fat, has three kids now, and still sucks.

My hatred of Paul stemmed from the notion that he had sold the rights to the Beatles’ music to Michael Jackson.

This notion was entirely false, and I feel like a fucking retard for even suggesting such a thing happened.

In fact, Michael obtained the rights to the music in 1984 by having his manager, John Branca, pay $47.5 million to Associated Television (also known as ATV), much to the displeasure of McCartney. Branca had previously approached both McCartney and Yoko Ono, trying to feel them out to see if they were going to make a move to bid on the rights. Both said they had no interest in bidding, so Jackson and Branca made their move. McCartney apparently took offense to this, and the purchase formed a rift between him and Jackson, who had been great friends up until then.

While my original statement was wrong, I’d like to say that McCartney acted like a huge bitch in this situation. Putting aside the fact that he was the one who turned Michael on to the idea of buying other musicians’ catalogs, McCartney said he wouldn’t be bidding on the rights to the Beatles’ music. At that point it’s fair game, McCartney can suck a fat one. You had your chance dude, that’s your own damn fault.

Michael Jackson isn’t completely innocent though. Years later, in the late 90’s, Mikey had the opportunity to do right by his old friend and share the wealth. Paul sent Jackson a letter asking for his fair share:

A reasonable request, considering the Beatles were one of the most important musical acts of the 20th century, and, well, Paul was a pivotal part of that.

Yeah, that’s what we in the biz call “Boston-baked bullshit”.

I love Michael’s music, I won’t deny that he’s one of the most important and talented performers of the 20th century, but really bro, that’s just plain wrong. As Birdperson would say:

So I guess my point in the original article still stands, but for different reasons. Fuck Paul McCartney for getting mad when someone else took the shot he was too much of a bitch to take, and fuck Michael Jackson for not doing right by his friend.

They’re both pillars of music history though, and I respect that.

As I write this, I’m listening to “Who Shot Ya?” by The Notorious B.I.G. Up next is “Ain’t No Half-Steppin'” by Big Daddy Kane.

When it comes to music, there seems to be a huge rift between people who like rap music and people who like rock music. For the longest time, I played into this rift and baselessly bashed all rap music, ignoring its merits and refusing to even give it the time of day. Much like today’s political climate. I’m not sure why this rift still exists, given that many rock groups collaborate with rappers (check out the album Loud Rocks for some really great collabs with legends of both genres). To this day I have friends who will get annoyed and leave parties if I put on a few rap songs, that’s how strongly people still adhere to this bullshit misconception that people can only like one genre or the other.

Being a product of the Philadelphia public school system, I was exposed to a lot of people who were fans of rap music, both white and black. I never had any problems with the black people I knew (though I was jumped by random black people a few times simply for being white), but the white people who acted like black ghetto gangstas were always without fail douchebags who would go out of their way to start shit with me. And don’t even get me started on the t-shirts that went down to the ankles, or the pants that sagged halfway down the ass. Gangsta fashion of the late 90’s and early 00’s was fucking retarded. Because of this, I associated rap music with being a retarded asshole and wanted nothing to do with it.

I considered Eminem the king of these “wiggers” (remember when that was a word people actually used?), and hated him and his music with unbridled passion. This dislike of Eminem continued all the way into the late 2010’s, thanks mainly in part to a crazy bitch of an ex (see the common theme here?) who was obsessed with Eminem’s music and literally strived to turn our relationship into one like that of Marshall and Kim Mathers. What this psycho bitch didn’t know was, you don’t wanna fuck with AJ, because AJ will fucking kill you. Or at least dump your crazy ass. This looney tune got dumped in favor of a girl who played third horn for the Philadelphia Orchestra.

Hilariously enough, Eminem is now one of my favorite artists.

Long story short, I judged an entire genre by its fanbase. As all long-time readers know, this is a cardinal sin in the Church of AJnet. I spent so many years depriving myself of a great genre of music for no good reason. I could probably write several articles about some of my favorite rappers, and I might even do so in the next couple of articles.

Still kind of fruity, but at least he’s not the creep who wrote “Hey There Delilah” so I guess that’s something positive to say about him?

Fuck these guys, I stand by what I said.

Fuck these guys, I stand by this one too.

Standing by this one too, fuck this bullshit.

I did an entire article on this already, and even provoked the ire of a local DJ.

Is this shit still around?

As for Bo Bice, Spotify tells me he hasn’t done much since American Idol. He does have a decent cover of “Time Has Come Today” though, so I guess I’ll cut him some slack.

Agree or disagree with my musical tastes? Did I get something factually wrong yet again? Got an old article you think I should revisit? Let me know in the comments!