Gina Carano did nothing wrong, and Twitter-Nazis need to shut the fuck up.

Here we go again folks! Free speech has come under attack yet again from the Cancel Culture Cult.

This time around, the raging, seething, hardcore-leftist mobs of Twitter have banded together to have former MMA fighter and current actress Gina Carano removed from her role as Cara Dune in the Star Wars/Disney+ series The Mandalorian.

The accusations against Gina.

So what did Gina do that was so horrible?

According to the Twitter-Nazis, Gina is guilty of being transphobic and racist.

The whole thing started when someone on Twitter demanded that Gina include “gender pronouns” in her bio. Because playing female roles, competing in female MMA leagues, and having enormous tits didn’t already make her gender obvious to anyone with half a brain. After politely declining and being repeatedly pushed by the Twitter-Nazis, Gina added “beep/bop/boop” to her bio as a light-hearted jab against the morons that were pressuring her to do something completely unnecessary.

Except it wasn’t a “light-hearted jab”, it was literally the Holocaust for trans-people, and Carano herself was Adolf Hitler:

The Twitter-Nazis roared in anger and accused Gina of being transphobic. Being a veteran of combat sports, Gina wasn’t having any of that and immediately called bullshit, calling the Twitter-Nazis out for “the bullying mentality of the mob that has taken over the voices of many genuine causes”. The Twitter-Nazis howled even louder, demanding a blood sacrifice to Karl Marx or whatever asshole these crybabies worship.

It became a feeding frenzy as the media piranhas scoured Gina’s Twitter history, picking apart every little thing she ever said. Including such abhorrent and controversial posts as:

“Expecting everyone you encounter to agree with every belief or view you hold is fucking wild.”

This vile woman, this living incarnation of evil, this transphobic racist, not only had the nerve to suggest that there was more to the official story about Jeffrey Epstein’s death, but she also thinks it’s okay for people to have different beliefs or views?

I bet she voted for Trump too, the fucking fascist!

Already fed up with the mountain of bullshit, Gina drew a comparison between today’s political climate and Nazi Germany:

“Jews were beaten in the streets, not by Nazi soldiers but by their neighbors…even by children. Because history is edited, most people today don’t realize that to get to the point where Nazi soldiers could easily round up thousands of Jews, the government first made their own neighbors hate them simply for being Jews. How is that any different from hating someone for their political views” 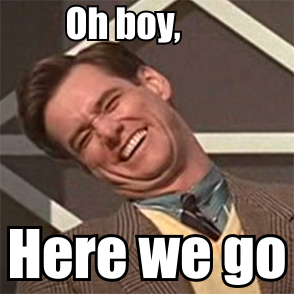 The cries of a gorillion angry SJWs could be heard from a galaxy far, far away as seething Gen-Z’ers took to Twitter in righteous anger and indignation. Not only was Gina Carano transphobic and racist, but now she was anti-Semitic!

Disney, a company with a founder known for being firmly against anti-Semitism, promptly fired Carano. Hundreds of thousands of supporters took to social media to protest this firing, but their cries were dismissed and ignored, because if there’s one thing Cancel Culture Cultists are good at it’s crying louder than everyone else.

Victorious in their cancellation of Gina Carano, the Gen-Z Twitter-Nazis moved on to other targets, like Eminem (Side note: If Gen-Z thinks “Love the Way You Lie” is bad I can’t wait until they get around to hearing “Kim”).

As far as I can tell, Gina Carano did nothing wrong.

I completely understand why a trans person would put their preferred gender pronouns in their bio, and even appreciate it because it helps avoid awkward situations.

Being outraged over “beep/boop/bop”? Get fucking real, losers. It’s not like Gina called trans people a bunch of faggots or something, she made a harmless joke in response to repeated demands to do something that she didn’t even need to do in the first place.

Get some reading comprehension.

If you retards actually bothered to read what she wrote, you’d understand her point. The Nazis were able to successfully round up Jewish people because the Nazi Party convinced Germany that the Jews were their enemy. They essentially turned the population of Germany against each other. Classic “divide-and-conquer” tactic, like dictators have done since the beginning of time and continue to do.

Gina was trying to say that conservatives are being demonized and persecuted by the left. I’m not one for partisan politics, but after repeatedly watching people getting cancelled and being stripped of their livelihoods because they have opinions that go against what the (left-controlled) media tells you to think, maybe she’s not entirely wrong.

Congratulations, you idiots proved her point in the most efficient manner possible.

How do we stop “Cancel Culture”?

There’s honestly not a lot we can do to stop cancel culture.

The justification for cancel culture that I see being tossed around the most is “accountability”. All of this is being done under the guise of holding people accountable for their actions and words. Which is great, except for one thing: Most of these people have done nothing except have an opinion. Gina wasn’t on Twitter saying that we should put transsexuals to the sword, all she did was refuse to include gender pronouns in her profile. What exactly are we holding her accountable for here?

The only realistic way we can combat cancel culture is, ironically enough, accountability.

The raging lunatics on social media who howl for blood every time someone hurts their delicate little feelings need to be held accountable for their actions, which amount to nothing more than bullying and harassment. They want to hold people accountable in the court of public opinion for simply having a different opinion on a hot-button issue? Let’s hold them accountable in a court of law for harassment.

Even better, many of these folks are stupid enough to use their real names when they make these posts. After all, these are the same people who constantly demand an end to online anonymity. Imagine if Gina Carano, a trained fighter, showed up at their front doors or places of employment (though I doubt most of them even have jobs) and confronted these crybabies to their faces. Everyone has a plan until they get punched in the mouth. I’m not calling for violence against these people, but man it would be sweet to see them face the same kind of “accountability” that they so eagerly dish out.

I don’t know what Gen-Z’s problem is, but I do know that their tactics only work because society allows them to. Cancel culture would be canceled the moment people stood up and actually fought back.

We’re living in a world where anyone who expresses an opinion even slightly right of center is pursued relentlessly by a raging mob and stripped of their livelihood, and that’s frightening.

Many of these people identify themselves as liberals, but this isn’t liberalism in the slightest. Liberalism is about being progressive, open-minded, and accepting. These lunatics are anything but. Getting someone fired for having a different political opinion from you isn’t progressive, it’s fascist insanity.

In their quest to silence Gina, the Twitter-Nazis have quite literally done the opposite and proven her point in a stark and terrifying manner. Imagine being so offended and upset by the words “beep/boop/bop” that you embark on a harassment campaign and ruin someone’s career.

Who the fuck are all these people on Twitter anyway? It’s strange, I see all this outrage from people on Twitter, yet I’ve never actually met someone in real life who holds these extremist views. Are you guys bots? Did some semi-sentient AI at Berkley suddenly go rogue? Some of this stuff is so silly that I often find myself questioning if people genuinely believe in it, or if it’s just some giant joke by trolls that spiraled out of hand.

It’s also terrifying that companies give into this pressure on a whim. There’s no appeal process, no trial, no nothing. The Twitter mob has become judge, jury, and executioner. If the mob says someone is a racist, that person gets dropped and blacklisted without a second thought. Yes, I know that private companies are not bound by the Constitution, and Lucasfilm has every right to fire her for stuff she said on Twitter.

“Nevertheless, her social media posts denigrating people based on their cultural and religious identities are abhorrent and unacceptable.”

Her statements did not denigrate anyone based on their cultural and religious identities. As such, the Lucasfilm spokesperson has made a false statement that is damaging to Gina’s character, i.e. slander.

If I were Gina I’d strongly consider legal action against Disney/Lucasfilm for both wrongful termination and slander.

What do you think about Gina Carano’s comments and her termination from Disney? Have an opinion on “cancel culture”? Drop me a line in the comments and let me know!