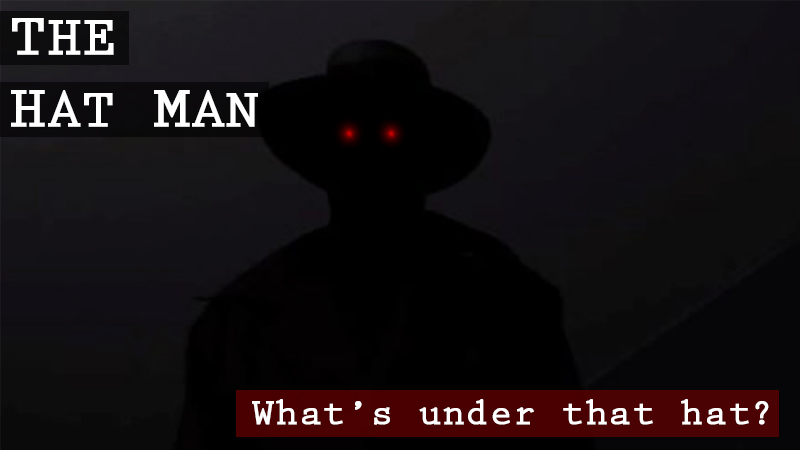 Who is the entity known as “the Hat Man”? What’s he hiding from us under that ominous hat of his?

I have a confession: I am a HUGE believer in the occult.

There, I said it.

I believe in things like demons, the Law of Attraction, cryptids, astral projection, psychic powers, and other things science has deemed to be nonsense. I even have a wild and outlandish theory regarding dreams being alternate realities, but that itself would warrant another article. Call me irrational, call me crazy, call me whatever the hell you want, just don’t call me late for dinner.

I like to differentiate myself from the weird spiritual nut-jobs that share my beliefs in the following two ways:

After spending many years researching these subjects, I completely understand why nobody wants to take it seriously. Much like politics, everyone seems to deal in nothing but extremes. Everybody is either an unmovable cynical skeptic genius that knows everything except for basic hygienic practices, or they’re Sam and Dean Winchester riding a unicorn into battle alongside the Pleiadians as they wage war for our soul matrixes against the evil Draconian Empire. Yet again I find myself asking, “Where is the middle ground?” Apparently the middle ground is a deserted island surrounded by an ocean of idiocy, and I’m stranded on it by myself. Another article for another time.

During my travels across the internet, I came across talk of an entity known as “The Hat Man”. The Hat Man is named for his trademark hat that he is commonly seen sporting, usually a bowler hat or a trilby/fedora. Most describe him as faceless or his face being blurred by shadows. Encounters with the Hat Man typically involve the terrified victim being paralyzed while the Hat Man stares at them and emanates “malevolent energy”, possibly feeding off of the fear he causes. Sometimes he even taunts his victims, mocking their helplessness or even threatening to kill them. Unlike the average “shadow person“, the Hat Man is seen as a more physical tangible manifestation, walking away from his victims rather than simply vanishing. The general consensus is that there is no way to adequately repel or defeat the Hat Man. Put simply, the Hat Man is a big friggin’ deal.

I spent a little bit of time reading up on the Hat Man, and using descriptions provided by others I produced my own depiction of the notorious entity. The following image is NSFW, and may disturb you: 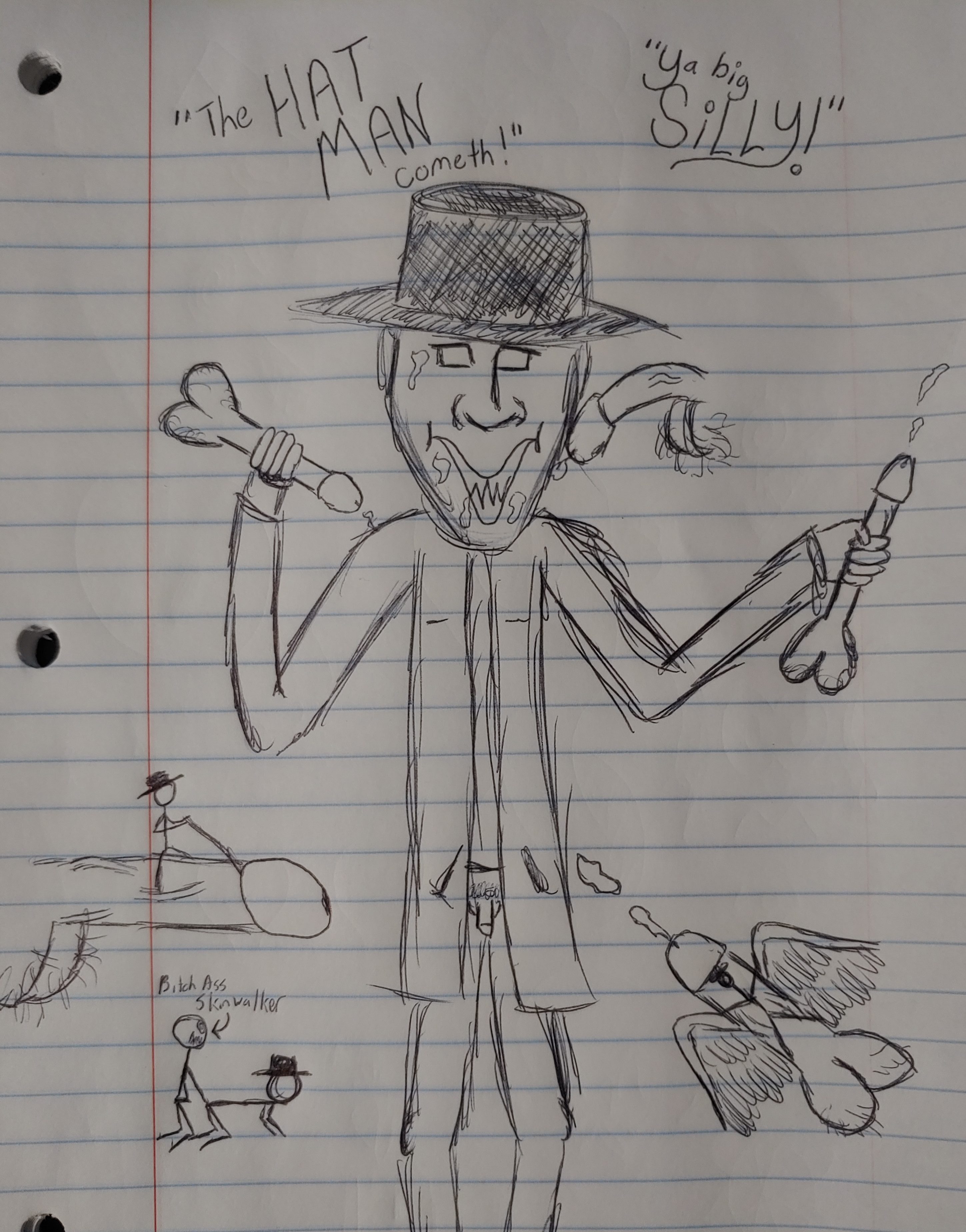 Because challenging a skinwalker wasn’t enough, I’ve decided to also challenge the Hat Man. Interestingly enough, no skinwalkers have answered my challenge. I can’t say I blame them, Philadelphia sucks. Even skinwalkers don’t want to set foot in this dump of a city. I’ll be damned if I’m driving 2,000 miles to some barren desert just to two-piece some old Native American shaman. So until a skinwalker decides to brave the concrete jungle, the Hat Man will have to do.

Why is anyone still afraid of this guy? Since the Hat Man operates on fear, I’m going to show you why you shouldn’t be afraid of this weenie, effectively taking away his power.

Sun Tzu wrote in The Art of War:

“If you know the enemy and know yourself, you need not fear the result of a hundred battles.”

With this in mind, I began analyzing the Hat Man, from his behaviors to his appearance. Why does he wear the hat? What’s underneath it? That’s when I came to my greatest realization yet about the Hat Man.

The Hat Man may specialize in fear, but I’ve figured out what he’s afraid of most: Male pattern baldness. Underneath that fedora is an insecure balding man. To cope with his fear of going bald, he dresses like a flasher at a playground and breaks into peoples’ bedrooms, watching them from the shadows like some sad little voyeur. I’m about 90% certain the Hat Man is wearing absolutely nothing under that long coat of his. If he wasn’t a demonic entity he’d drive a windowless panel van and wouldn’t be allowed within 500 feet of a school. How is anyone afraid of him? If the Hat Man appeared in my bedroom I’d knock him upside the head with a baseball bat, then call the cops and tell them I woke up to some creepy pervert standing over me. He’d get thrown in jail, and Preston and Steve would do a bit about it on their Bizarre Files segment. You want to talk about paralysis? Hat Man’s only shot at incapacitating me would be if I collapsed with laughter at how silly he looked.

Let me hit you with an advice bomb, Hat Man. First, lose the hat. It’s okay to go bald, just do like I do and buzz it. Grow a manly beard to go with it, then lift some weights, eat about 4,000 calories a day, and build some muscle on your bony ass. You want to look less like a child molester, and more like you’re going to rip my soul right out of my body with brute force. There’s only a handful of dudes who can pull off wearing a fedora with an overcoat, so unless you’re secretly the Undertaker or the Saint of Killers it’s time for a change. If I woke up and saw a tall lanky guy in a fedora and overcoat staring at me I’d assume he was a sex offender. But if I woke up and saw a guy that looked like Jens “The Beast” Dalsgaard staring at me I’d crap my pants in fear. Buzz your hair, grow a long beard, and put on some muscle. Otherwise you’re going to get clowned on pretty hard once this article gains traction.

I understand that there are a lot of people who truly believe that the Hat Man exists, and are genuinely afraid of him. I want those people to understand that there’s really nothing to be afraid of, even if he does exist. Next time you come across this loser, think of him as less of a monster and more of a creepy but harmless sex offender who might open his coat to show you his tiny doo-dad. Then laugh in his shadowy face and tell him to get lost. If you’re stuck, just think about the silly picture I drew. Picture the Hat Man flying on a winged penis, or riding one like a cowboy riding a horse. Yee-haw! The best way to fight fear is to laugh.

If the Hat Man is real, I’m issuing a challenge: I want to fight him. Surely the Hat Man is capable of knowing when someone is calling him out. That’s how these things work, right? You talk enough about the entity and it attracts them. Unlike a skinwalker, the Hat Man doesn’t have to travel long distances, he can supposedly manifest right inside the house or in a dream. So here I am Hat Man, come and get me.