Skip to content
HomeFood and DrinkThinking about brewing an IPA? Don’t.

I wouldn’t call myself a beer snob. More like a beer connoisseur, or a borderline alcoholic.

In the “Featured Image” on my last article, you can probably see the assortment of beer bottles and caps behind me. Some time ago, I decided to widen my palate from my usual Yuengling Lager (a beer invented by God himself and bequeathed to German immigrant David Yuengling as a gift to America for kicking the British Empire’s ass twice in 50 years). I turned to the world of craft beer. “Craft beer”, a buzz word typically heard emanating from the mouths of hipsters. Anybody can brew a beer (seriously, look it up, it’s not that hard), and such is the principle behind craft beer. Even Drew Carey and his friends did it. If Lewis and motherfucking Oswald can brew beer, anybody can. On a side note, if anyone knows where and how I can actually obtain a Buzz Beer I will give you a shout-out in a future article, which really isn’t worth shit but still it’s something I guess. Maybe one day there will be AngryJerk.net t-shirts and I can reward people with those. But until then you’ll have to settle for public acknowledgement.

In the last 10 years or so, young men all across America have tried their hand at brewing their own beer, leading to an over-saturation of shitty beer in the local beer markets. It’s kind of like modern TV, thousands of channels and most of them suck. Walk into any craft beer store and you’ll be greeted with hundreds of different beers, most of which could chemically qualify as urine.

For those who aren’t too familiar with the world of beer, there are multiple styles of beer. Some of the most common ones are:

I know I forgot some, but your mother. I know I also forgot the subsets of each style, but your sister.

There are vast differences in taste and manufacturing of each style, but since this article isn’t about how to brew I’m not going to waste time going into detail. What this article IS about is a very specific style of beer, the India Pale Ale, commonly known as the IPA.

If you’ve never had an IPA, they’re the most bitter and over-hopped style of beer on the planet. Supposedly this is the big draw, it’s loaded with hops and it has a high IBU (a scale hipsters use to measure the bitterness of craft beer). Those of us who don’t like the taste “just don’t get it”. Because it takes a worldly man to truly appreciate the taste of fermented mule piss.

Not only are they the most bitter and over-hopped style of beer, they’re also one of the most common as far as craft beer goes. I have a few craft beer stores that I frequent in my area, and I’ve also visited a few outside of my area. One thing is consistent between every craft beer store I go into, and that’s the fact that at least 75% of the beers on the shelves are IPAs. It’s becoming near-impossible to find craft beer that isn’t an IPA. I’ve read around, and apparently the biggest reason for this is that IPAs are the easiest and quickest beers to brew, yielding in a quicker turnover for the brewer. In other words, the average craft beer brewers have little to no talent and would rather just release another generic shitty product than put time and effort into quality. They’re flooding the craft beer market with shitty beer out of pure laziness and lack of skill.

Another explanation I’ve read about the overabundance of IPAs in the craft beer market is that some brewers fuck up their recipes, and in order to mask the terrible flavor they simply add more hops. The bitterness of the extra hops distracts the drinker’s tastebuds from the fact that they’re drinking urine. Here, I made a little comic to illustrate how this works: 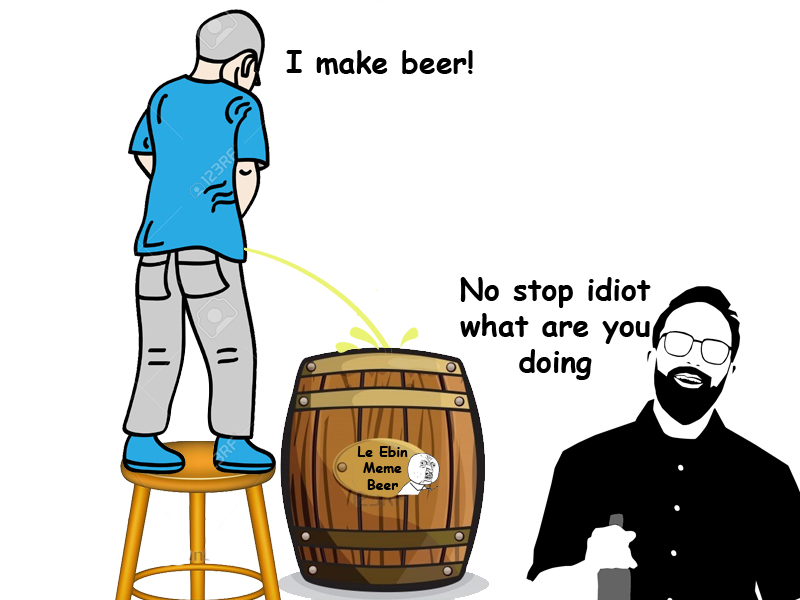 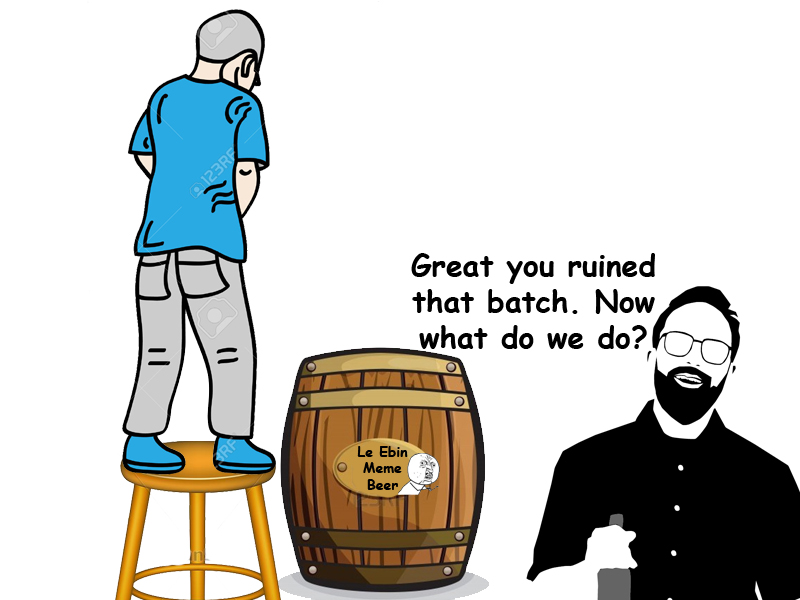 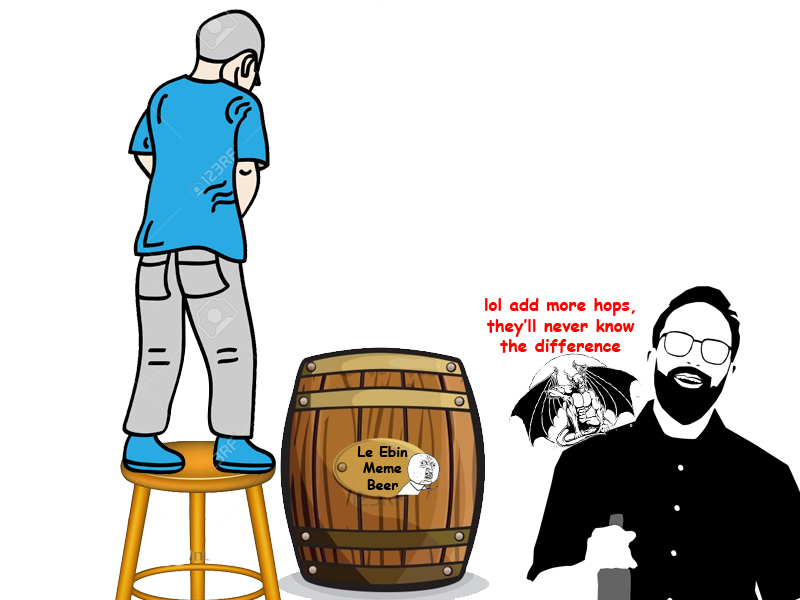 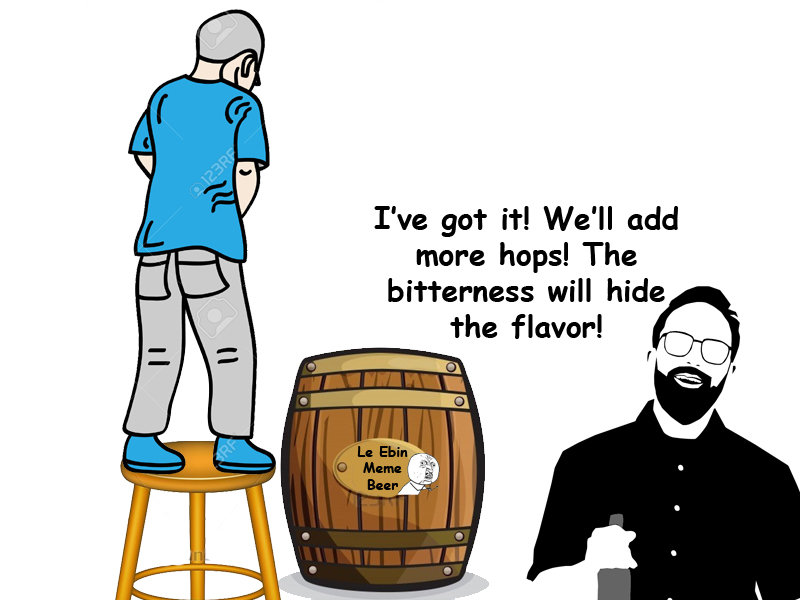 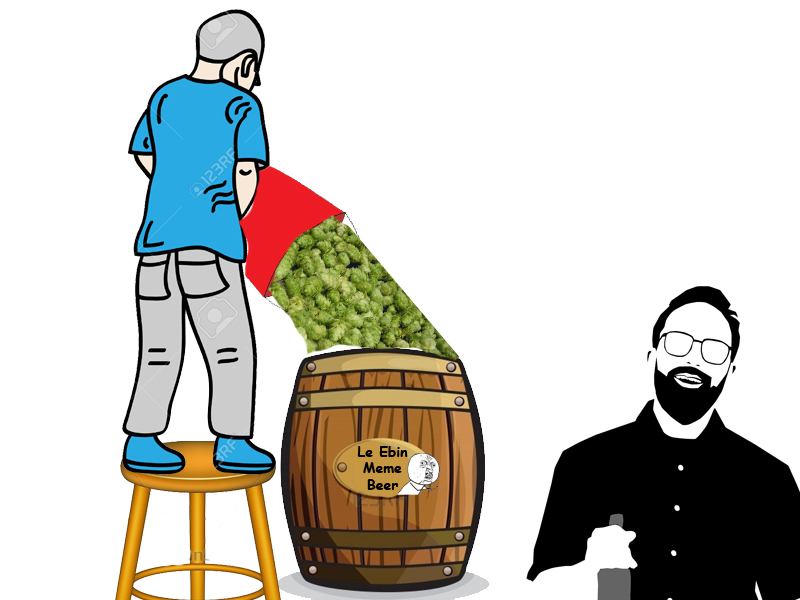 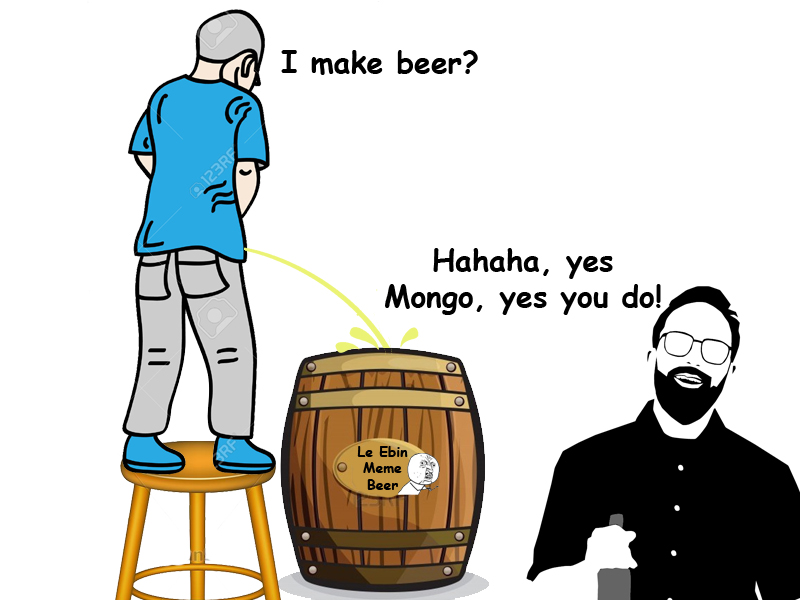 Mongo Weyerbacher would then go on to found his own beer company, using his proprietary organic formula.

Among these IPAs is the self-proclaimed king of hoppy beers, Arrogant Bastard Ale (that devil on his shoulder looked familiar, didn’t it?). I can get behind the name, I really honest to god can. What I can’t get behind is their over-the-top marketing. From the back of their bottles:

This is an aggressive beer. You probably won’t like it. It is quite doubtful that you have the taste or sophistication to be able to appreciate an ale of this quality and depth. We would suggest that you stick to safer and more familiar territory—maybe something with a multimillion-dollar ad campaign aimed at convincing you it’s made in a little brewery, or one that implies that their tasteless fizzy yellow beer will give you more sex appeal. Perhaps you think multimillion-dollar ad campaigns make a beer taste better. Perhaps you’re mouthing your words as you read this.

At Arrogant Brewing, we believe that pandering to the lowest common denominator represents the height of tyranny—a virtual form of keeping the consumer barefoot and stupid. Brought forth upon an unsuspecting public in 1997, Arrogant Bastard Ale openly challenged the tyrannical overlords who were brazenly attempting to keep Americans chained in the shackles of poor taste. Since the very beginning, Arrogant Bastard Ale has reveled in its unprecedented and uncompromising celebration of intensity. There have been many nods to Arrogant Bastard Ale…even outright attempts to copy it…but only one can ever embody the true nature of Liquid Arrogance!

I get it, it’s supposed to come across as arrogant to match the name. Unfortunately, this just comes across as over-the-top pretentious. It’s basically telling you that if you don’t like their over-hopped shit beer then you’re uncultured, stupid, and probably drink Miller Light. I’ve had this beer, and while it’s honestly not the worst IPA I’ve ever had to force down my gullet (that honor goes to Victory’s “Dirt Wolf”, one of only three beers I’ve ever poured down the drain, the other two being Corona and a local brew called “Maple Mistress”), it’s nothing to write to your mom about. “There have been many nods to Arrogant Bastard Ale”. I’m sure there have, and most of them are literal nods from people awkwardly shuffling their feet and nodding along at some elitist hipster douchebag who can’t shut the fuck up about how “refined” their taste in beer is, all the while wishing they’d just fuck off already. You’re right Arrogant Bastard, I’m not worthy. And you’re not worth the $10 you cost. Fuck your bitter over-hopped bullshit and fuck your pretentious marketing.

As  a beer connoisseur, my advice to any aspiring brewers would be to take some pride in your craft and put the time and effort into perfecting a product that’s actually drinkable. If I want bitter I’ll hit the liquor. The market is already over-saturated with IPAs, and chances are you won’t be bringing anything new or unique to the table by releasing your own. I don’t care how witty or clever you think your label is, do us all a favor and don’t brew another goddamned IPA.