If you took a clump of shit, rolled it into a ball, and dyed it red, you’d have a tomato.

Tomatoes ruin anything they touch with their acidic bullshit, from sandwiches to salads. Their juicy bitter flavor overpowers pretty much anything. This is what any sandwich with a slice of tomato on it tastes like: 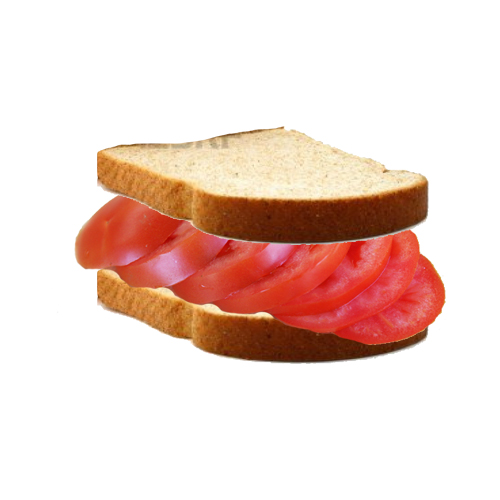 All I can taste is the tomato. No meat, no cheese, no mayo, no lettuce, just tomato.

Need more proof that tomatoes suck? Look at history. For centuries, tomatoes have been used to express disapproval of everyone, from actors to criminals to leaders. Why would we waste this common food item when there’s so much other shit we could throw at these people? Because tomatoes fucking suck, so they’re expendable enough to throw at people we hate. When they shackled rapists to the town square and pelted them with tomatoes, they were basically saying “Hey you fucking rapist, you’re a nasty person, so I’m going to hit you in the face with this nasty food item.”

I tried to give tomatoes the benefit of the doubt once. I tried to prove myself wrong. One time I ordered a hoagie (A hoagie, for those of you not familiar with the word, is a fucking hoagie. Not a “hero”. Not a “sub”. A fucking hoagie. Learn the lingo you stupid fuck.), and I specifically said “No tomatoes”. I even watched the lady behind the counter write it down, underline it, and circle it. If it were any more obvious, it would have smashed a beer bottle on the table and called your wife a whore before faceplanting into the counter. Look, I even dug the ticket out of their dumpster and scanned it: 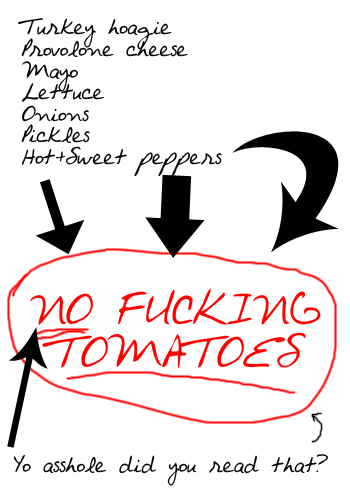 She handed it to the guy at the sandwich board, who proceeded to completely disregard the ticket and make whatever the fuck he wanted, which was turkey and American cheese with oil, lettuce, onions, pickles, and TOMATOES. By the time I got it home and discovered this, it totally wasn’t worth taking the trip to return it. I thought to myself “You know what, maybe I’m wrong about tomatoes”, and took a bite of the hoagie. Nope, I was right. All I could taste was the tomato. Not the meat, not the cheese, not the lettuce, onions, or pickles. Just tomato and bread. In the end, I simply pulled the tomatoes off and ate the damn thing, which still tasted of tomatoey bullshit. I then washed my mouth out with half a case of beer and pissed on the menu the place gave me. That’ll show them.