Skip to content
HomeSocial CommentaryThanks for the advice asshole, now fuck off 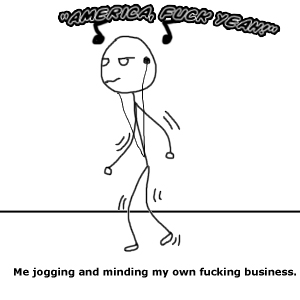 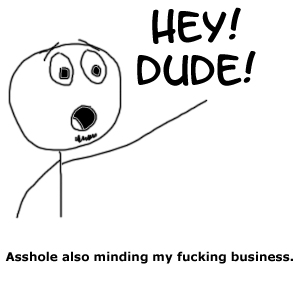 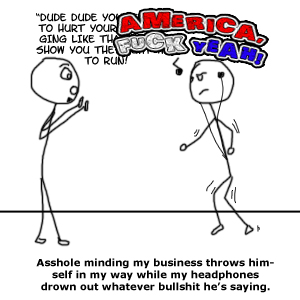 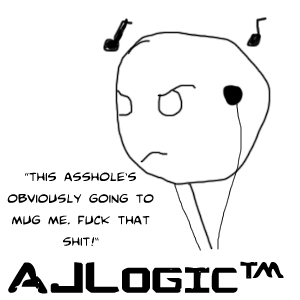 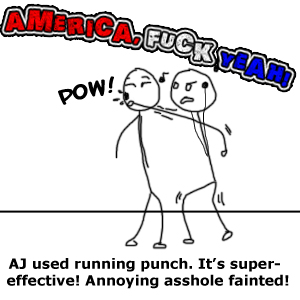 And according to several eye-witnesses and most likely the police after I fled the scene, I was the asshole. Because when someone runs in front of you trying to physically stop you while you’re jogging with headphones on, the most logical assumption is that your running technique is wrong and they’re looking out for your safety. Especially in a crime-ridden city like Philadelphia. What an idiot. Seriously, how the fuck can you jog wrong?

I’m tired of these obnoxious fucking jerk-offs who feel the need to forcibly stop me from doing something because they think I’m doing it the wrong way. Yes, there’s times when such drastic actions may be called for, like when someone is about to help themselves to your jug of Captain Morgan or when someone’s wife is sucking your dick and you feel teeth. Unfortunately, people have a nasty habit of stopping me at the most inappropriate times possible.

Like the other day at Walmart when I was carrying a 50-pound box across the store and some random dumbfuck thought it would be a good idea to put himself in front of me and yell “WOAH WOAH WOAH BUDDY, STOP, YOU’RE GONNA HURT YOUR BACK LIKE THAT!” Nobody stops this train when it’s in motion, and this guy learned that the hard way. “Woah shit, watch out!” The box dropped out of my hands and into the guy’s shins, bringing him to the ground. He started flipping out like it was my fault, screaming about how I had viciously assaulted him when he was just trying to help me. Motherfucker you jumped in front of someone carrying 50 pounds at a relatively brisk pace and forced them to stop. What did you expect to happen? I got told off by security and the other guy got a pat on the ass and sent on his merry little way to go suck dicks or whatever he does in his free time.

There’s a reason that I do things the way that I do them: It’s easier for me. Almost every time I’ve had an accident doing something the “wrong” way, it was because somebody else tried to interfere. At one job I had I was slicing potatoes for potato salad. For those with no actual culinary knowledge, there’s a standard way most cooks hold their knives when slicing which is supposed to safeguard your fingers should the knife slip. Watch a cooking show if you don’t know what I mean. I don’t hold my knife like this because it feels uncomfortable to me. Slicing my way, I have never cut myself in the eight years that I’ve been doing kitchen work. In contrast, I’ve nicked myself on more than one occasion using the “safe” method.

So there I am cutting potatoes my way, when I hear the voice of the line cook. “YO YO YO THAT AIN’T SAFE, SOMEBODY STOP HIM!” My arm is immediately grabbed mid-cut, causing me to nick the tip of my finger. While I’m wrapping a paper towel around my bleeding finger, the line cook is standing there trying to lecture me about how I was holding my knife wrong and I’m lucky I didn’t lose my finger:

Line Cook: Yo man you was holdin’ your knife wrong!

Me: What the fuck, you made me cut myself!

Cook: I ain’t make you do shit! You was holdin’ your knife wrong!

Me: I was fine until you grabbed my fucking arm while I was cutting. What the fuck is wrong with you, dude?

Me: You pulled on my arm while I had a knife in my hand!

Cook: You were cutting wrong man, that shit wasn’t safe!

Me: As opposed to grabbing someone’s arm while they’re cutting. That’s totally safe you fucking idiot.

Cook: You lucky you ain’t cut yo finger off!

Me: That’s the only time I ever cut myself holding my knife like that.

Cook: Well you wouldn’t have cut yourself if you wasn’t holdin’ yo knife wrong!

Me: No, I wouldn’t have cut myself if you didn’t grab my fucking arm, asshole.

Cook: Yo stop insultin’ me man.

Me: Then don’t fucking touch me while I have a knife in my hand, you fucking dickhead.

At that point the argument descended to childish name-calling and empty threats of physical violence on the part of the line cook.

There’s nothing wrong with offering verbal advice, but don’t just fucking grab someone while they’re doing something you consider dangerous, because you’re going to increase the likelihood of an accident. Seriously, what would compel someone to just grab another person’s arm while that person is in the middle of using a knife, or to jump in front of a person who’s jogging while wearing headphones?

You retards make me hate being a human.

Game: Golf With Your Friends