We’ve all heard the “official” story behind 9/11 countless times. “A bunch of Islamic extremists hijacked planes and crashed them into the World Trade Center and the Pentagon.” We’ve also heard the countless conspiracy theories behind the attacks. “Bush allowed it to happen to start the war in Iraq!” “The New World Order did it!” We’ve also heard the whole “Jews were responsible!” thing. This theory started with a chain letter that said something to the effect of “All of the World Trade Center’s Jewish employees called out on 9/11” or something equally retarded. A quick search reveals that this is bullshit, and that somewhere around 18% of the casualties in the World Trade Center were in fact Jewish. But that doesn’t matter, because every single Jewish person everywhere is connected by a network. This network is powered by Holocaust guilt and Fran Drescher’s obnoxious voice.

The truth is, the Jews are scapegoats for a higher power! That’s right, the Jews are just as much patsies as the Muslims. This higher power is actually a force not of this world. Even the Reptilian empire from Alpha Draconis is nothing compared to these masters of disaster, these bearers of terror.

The true masterminds of the 9/11 attacks? These devious bastards: 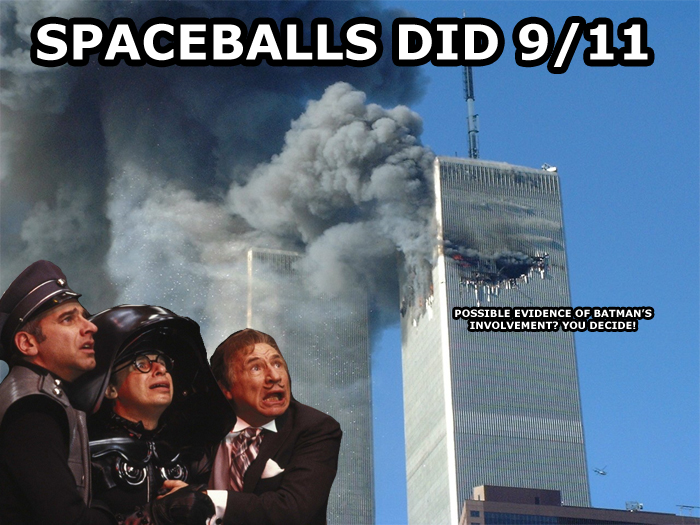 After their failure to take over Planet Druidia, the Spaceballs set their eyes on our own blue marble, and launched a campaign to wipe us out and take our resources. The Spaceballs have been here for millenia, and are behind every major conflict in history. The Spaceballs crucified Christ, sparked the American Revolution, triggered both World Wars, and provoked the current American military prescence in the Middle East. They are also planning a large-scale conflict between the US and a Chinese-led alliance, set to start in 2012.

The most powerful families in the world are secretly Spaceballs. The Rockefellers, the Rothschilds, the House of Windsor, the Kennedys. All members of this cruel and sadistic alien race bent on exterminating the human race and taking our planet for its air supply. All responsible for plotting the terrible events of 10 years ago.

Some more facts for you to ponder over: