I hate when people try to throw their beliefs in my face. You’ve got an opinion on something? Great, I’ll be more than happy to hear it when the topic comes up. Your opinion might be completely fucking stupid (i.e. “We need tighter gun laws to prevent mass-shootings!” and “Rich people have too much money, so we should make them use some of that money to support poor people!”), but this is still somewhat America, and it’s your right to be completely fucking stupid.

One of the most typical issues that people get riled up over is gay rights, namely their right to marry. I still don’t understand why this is such a huge fucking issue. Just give individual judges and churches a choice as to whether or not they want to marry a gay couple. This way nobody has to do anything they don’t want to do, and I don’t have to listen to straight people give a shit about two gays getting married.

At this point, there’s probably several people wondering “Well AJ, you throw around the word ‘faggot’ like you’re some kind of gay basher. Why would you support the rights of gay people to get married?” First of all, I use “faggot” as a generic term. I do the same thing IRL with the word “nigger”. Most of my friends are straight white people, and I’m constantly calling them faggots and niggers. You don’t have to be gay, or even a male, to be a faggot in my book.

Second, who gives a fuck if two gay people get married? Seriously, what’s the big deal? Oh wait, that’s right, it violates the sanctity of marriage. Unlike all the 20-year old couples that marry on a whim after being together for a year, have two or three kids, then get divorced two years later after one partner catches the other being unfaithful despite the fact that they were unfaithful too. Premature and unfaithful marriages? No big deal. Two queers getting married? Hell no, we need some government regulation up in this bitch!

With all of that said it’s time for the gay community to shut the fuck up with this “We’re here we’re queer” bullshit. Being in-your-face is only hurting their cause by annoying the fuck out of everybody. It’s not just straight people that are getting pissed off with this shit either. I know a gay guy who feels the same way. The more you force something onto people, the less likely they are to accept it. It especially doesn’t help your case when you’re doing it half-naked: 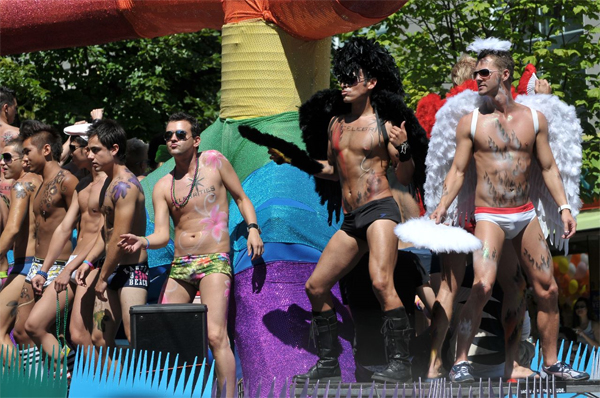 “Why do people hate us? It’s not like we look like a bunch of repressed sex-freaks or something!”

You’re blocking up traffic, blasting shitty music, and dancing around half-naked wearing angel wings and body paint, and you expect us to support your cause? Fuck no, if anything that’s going to make me want to rip those ridiculous wings off and use them to beat your ass up one side of the street and down the other. And then you guys wonder where assholes like Fred Phelps get the idea that you’re nothing more than depraved sexual deviants.

Seriously, what the fuck? You whine and complain that you’re not treated the same as straight people, yet here you are doing everything you can to distinguish yourselves from us. Do straight guys throw huge parades where they strut around in thongs, booty shorts, and angel wings? Do straight guys cover themselves in bodypaint and dance around with rainbow flags? No, they fucking don’t. If you want people to not hate you and maybe even consider taking your cause kind of seriously, cut that shit out.

Nah, I’m just homophobic and intolerant of other cultures. You know, ’cause strutting around in public while wearing a thong, angel wings, and excessive body paint is what being gay is all about.