Seriously, why does the national media like to obsess over missing white females? 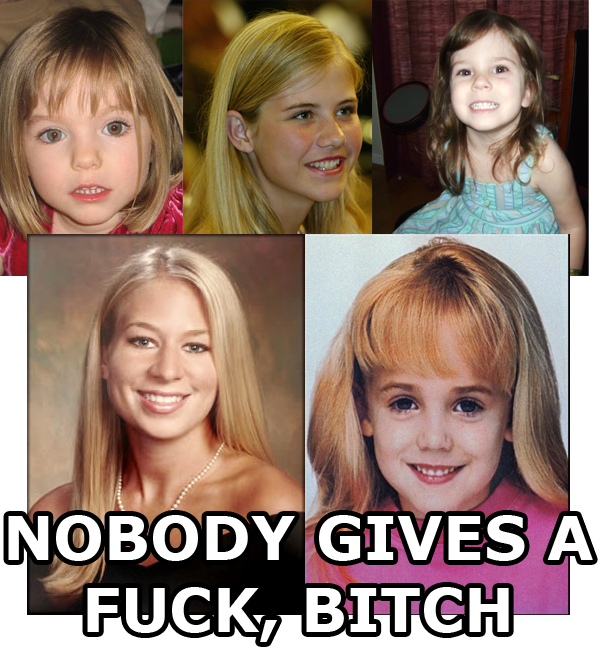 I can understand if a local affiliate is reporting a child that’s missing in their broadcast area, but there’s no reason on Earth that I should even know who the fuck Madeleine McCann is. Bitch is from England and goes missing in fucking Portugal, and I have assholes in America crying to me “OMG THIS IS TERRIBLE. WE HAVE TO SAVE MADDY!”

While we’re on the subject of Madeleine McCann, I decided to do a little bit of research into this case. Regardless of who you think did it (HER PARENTS), all evidence points to one obvious conclusion: HER PARENTS ARE FUCK-UPS. But Jesus Christ, it should be obvious to anyone with half a fucking brain that her parents had a hand in it. Why else would they have their attorney going around sending bullshit legal threats to people who have accused them? I also love the idea that it’s illegal to air your suspicions about someone’s guilt. Well fuck it, I WHOLEHEARTEDLY BELIEVE THAT THE PARENTS OF MADELEINE MCCANN HAVE AT THE VERY LEAST GUILTY KNOWLEDGE REGARDING MADELEINE MCCANN’S DISAPPEARANCE. AS PART OF AN ACTIVE COVER-UP, THEY ARE ATTEMPTING TO SQUELCH THE VOICES OF THOSE WHO ACCUSE THEM. If they weren’t really guilty, why would they be wasting their time going after people accusing them? All of you gullible saps who have donated money to their “cause” and made them millionaires, congratulations. You’re guilty of aiding and abetting criminals! Your money isn’t being spent on locating their missing kid, it’s being spent on filing empty legal threats, most likely with the intent to cover up some kind of wrong-doing on their part.

Since you obviously care, here’s my theories on some other missing white women:

Natalee Holloway: Bitch obviously wanted some black dick, her upper-middle class parents didn’t approve, so she ran away in the Caribbeans. Right now she’s probably stoned out of her mind and getting plowed by 5 huge black dongs.

Jonbenet Ramsey: After a particularly bad episode of “Hell’s Kitchen”, Uncle Gordon went to visit his niece only to find out she lost a beauty pageant. “Oh bloody fucking hell, everyone’s a fucking disappointment!” the chef yelled, before mutilating Jonbenet with a chef’s knife.

Elizabeth Smart: Dumb as a fucking brick, but I’d still tap that.

Caylee Anthony: I don’t really give a fuck about this one, so I’ll just assume the butler did it on a Sunday, then told police he was getting the mail when it happened. He then proceeded to sing and dance to the song “Smooth Criminal”, replacing “Annie” with “Caylee”.

Tamika Sholanda-Jones: Nobody gives a shit, since she was black.

I’m sure everyone has realized by now that it’s always upper-middle class white females who get all the coverage. Little Shanaynay from the hood goes missing, and even the local news doesn’t give a shit. But Megan McVanderslut from the suburbs goes missing while on vacation in the Caribbean, and it’s “BREAKING NEWS” every time the lead investigator takes a shit. “Well Tom, it appears Detective Wheatley had corn for dinner last night. The stool’s consistency leads our analysts to believe that his steak just didn’t agree with him.” NOBODY GIVES A FUCK. I refuse to believe that this bullshit boosts the ratings of news outlets in any significant way. Call me naive, but I still have just a shred of faith left in humanity. C’mon people, you don’t really care about this shit, do you?

Fuck this, time to send a declaration of war to an alien race on behalf of the entire Earth. So long, and thanks for all the fish.