I’m sure most of you already knew that, but I figured I’d provide evidence.

If you still bother to read his neglected bastard child that he calls his website, you’ll know that he’s released a new edition of his book, “The Alphabet of Manliness”. This one also includes the “Numbers of Manliness”. I haven’t read it, but I have it on good source that it goes as follows:

0- The number of times you will laugh while reading any future articles by Maddox.

2- The number of women who were desperate enough to sleep with Maddox.

3- The number of digits in the total amount of money Maddox will receive in profits from the new edition of his book.

4- The number of digits in Maddox’s weight.

5- The number of months Maddox spends fact-checking every claim he makes in his rants.

6- The number of years that have passed since Maddox was actually funny.

7- The number of unsuccessful suicide attempts Maddox has made since he realized how deep in debt he is because of his website.

8- The number of suicide attempts it will take for Maddox to finally succeed. Here’s to hoping, anyway.

9- The number of years before Maddox will finally realize he stopped being funny in 2004 and call it quits.

For those who are wondering, the “Numbers of Angry_Jerk” would go something like this:

0- The number of times I’ve beaten my girlfriend for nagging me about my excessive internet usage. Nope, didn’t happen.

2- The number of times each day my girlfriend bumps into walls and hits her eyes. I guess after a heated argument with their boyfriends/husbands women lose coordination.

3- The number of Back to the Future movies made.

5- The number of times each day that I beat off to this picture: 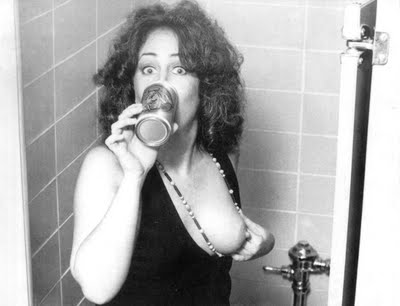 7- The number of days each week that I would fuck Grace Slick if I could travel back to the year 1960.

24- The number of hours each day that I would fuck Grace Slick if I could travel back to the year 1960.

35- The length in minutes of that song “One Bourbon, One Scotch, One Beer”. The way that song drags on and on and on, it feels like 35 minutes.

216- The best number ever because fuck you.

So just like he did when the first edition of his book was released, he went on another tour, visiting his fans at a bunch of book stores across the country. Wonder what some of the biggest tools on the face of the Earth look like? Here you go. 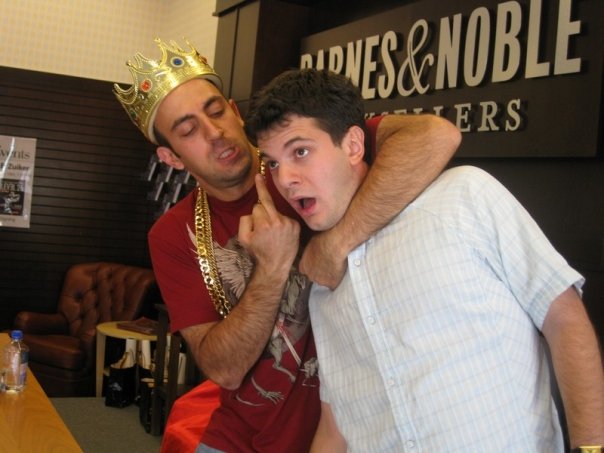 “Hey man, FurCon doesn’t start for another couple of hours. What do you wanna do?”

“Let’s go to Maddox’s book signing and be faggots.” 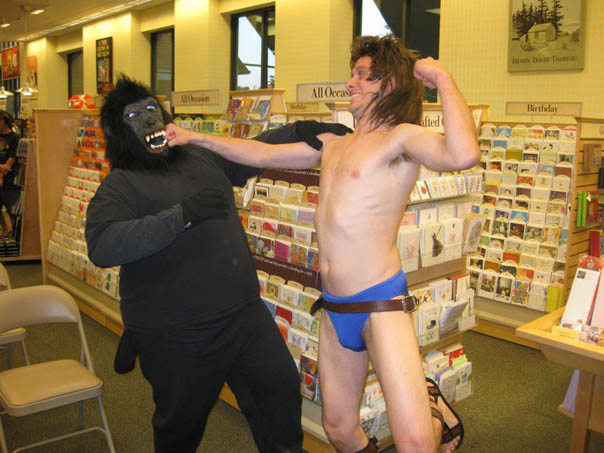 Maddox’s photographer is the master of fat girl angle shots.

Maddox was on this guy’s nipple? 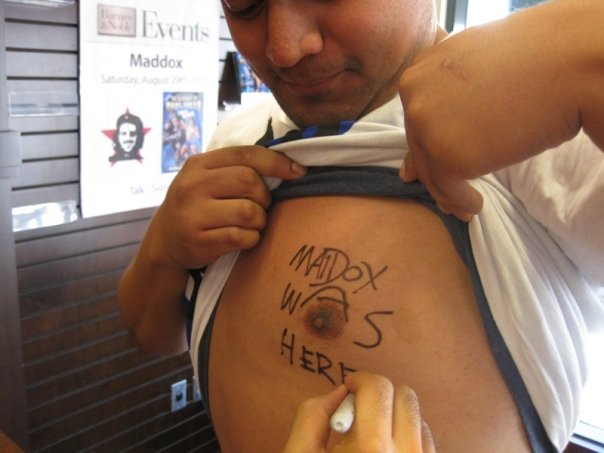 Oh man, I would have loved to have been that guy. Maddox left his nuts wide open for a punch, which I would have taken full advantage of. Sure, I’d probably face a huge array of assault charges, but the internet kudos would have been worth it. 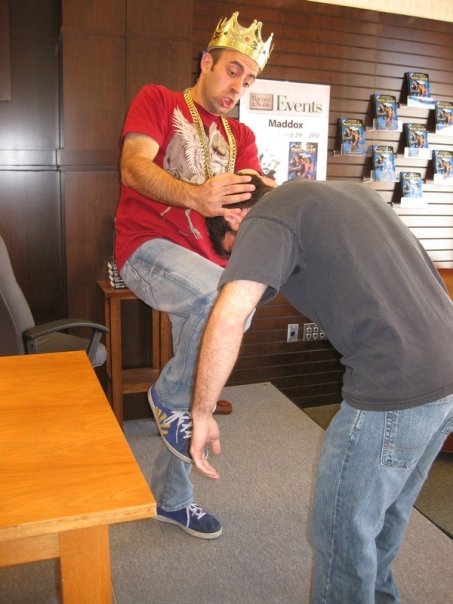 Insulting your fans never gets old, and neither does Don Rickles. 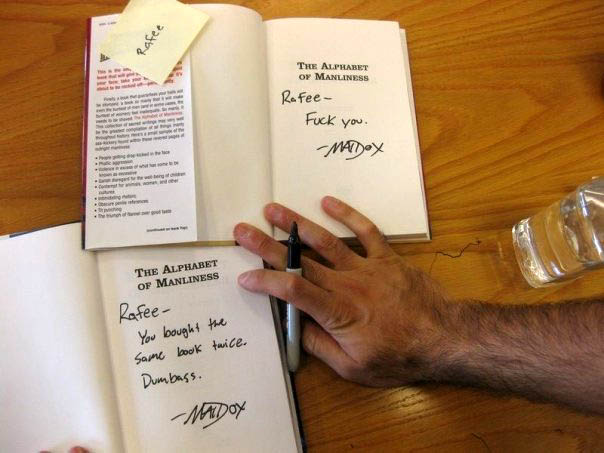 Alright, you were obviously at the thrift store for that jacket, so why not grab a cheap pair of pants that would go with it instead of wearing khaki shorts and looking like a huge yuppy pussy? 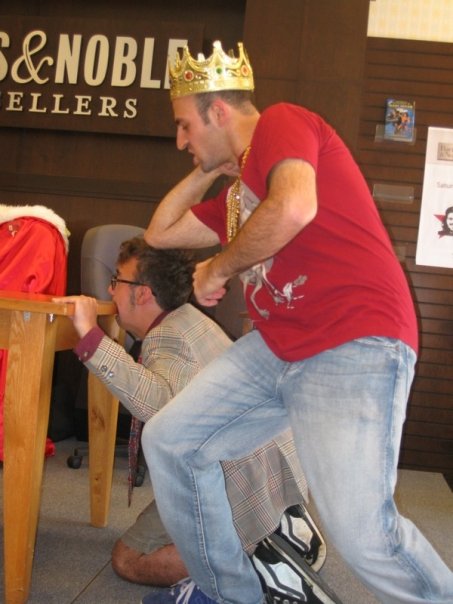 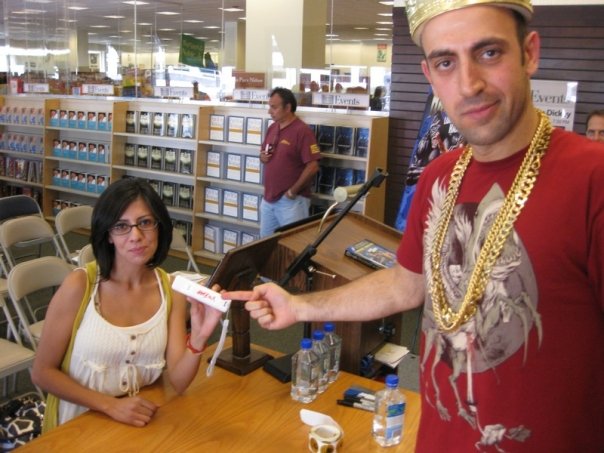 The only way he could be any more edgy is if he wrote “Fuck Hillary Clinton” on a copy of Grand Theft Auto: San Andreas while drinking a cup of hot coffee from the Starbucks inside the bookstore. 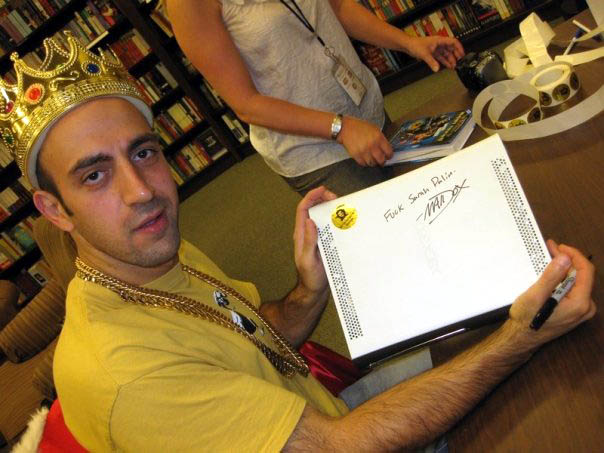 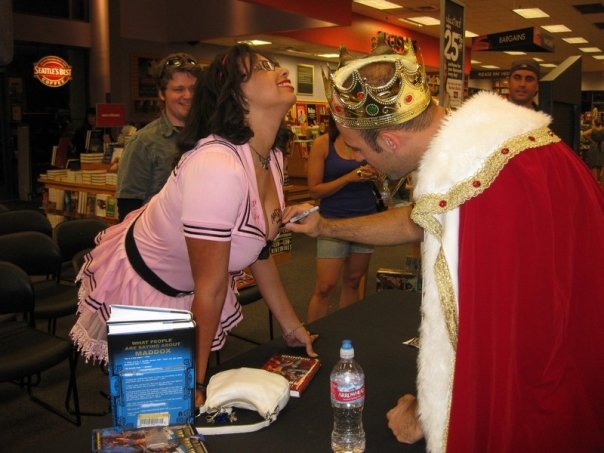 “Come on, just one more picture!”

“You take 50 picture of me already! Leave me alone!”

“You’re pretty HOT in that costume! Am I clever or what?” 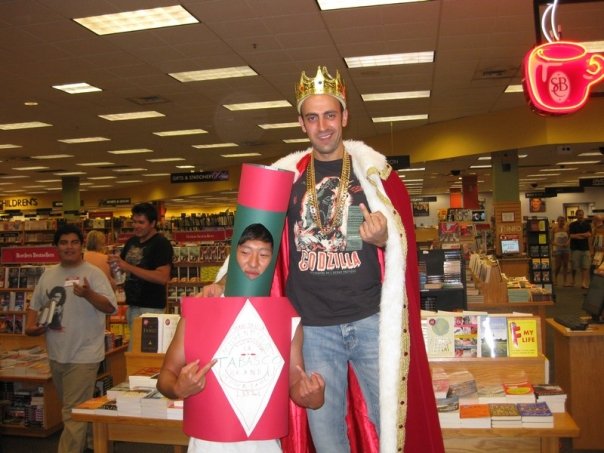 This picture makes no sense, but I’m sure there’s some kind of homosexuality involved here. 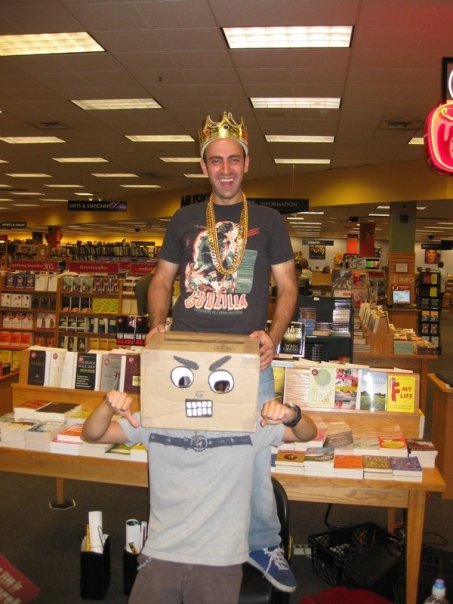 Imagine yourself in this poor guy’s shoes. You go into a bookstore to buy your kids a “Frog and Toad” book, when you’re accosted by some weirdo wearing a crown and robe and fake gold chains insisting that you pose for a picture with him while making sexual gestures you don’t understand. 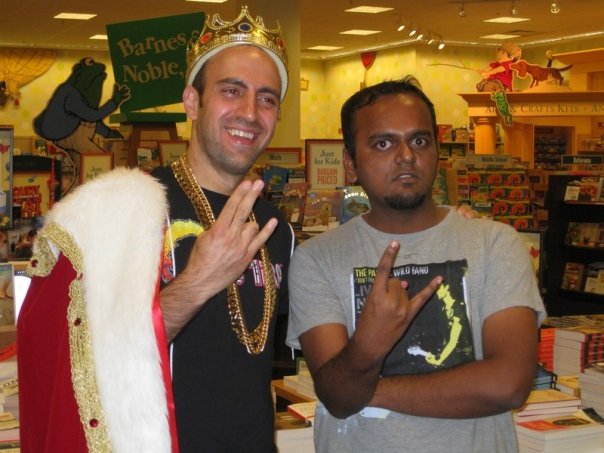 Gee, for not liking children, Maddox sure spends an awful lot of time around the children’s section and taking photos of himself with jailbait. I think he might be a pedoph- HEY WAIT A MINUTE IS THAT MY EX IN THE GREEN PANTS? FUUUUUUUUUUUUUUUUUUU- 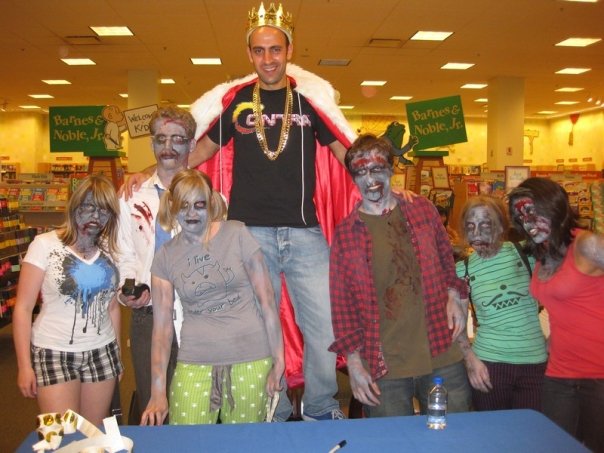 For purely scientific reasons I measured the Sharpie on my desk and it was 5 1/2 inches long. Maddox is obviously trying to overcompensate. 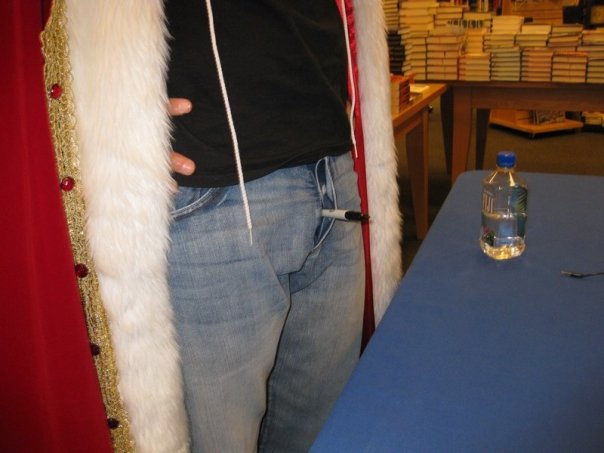 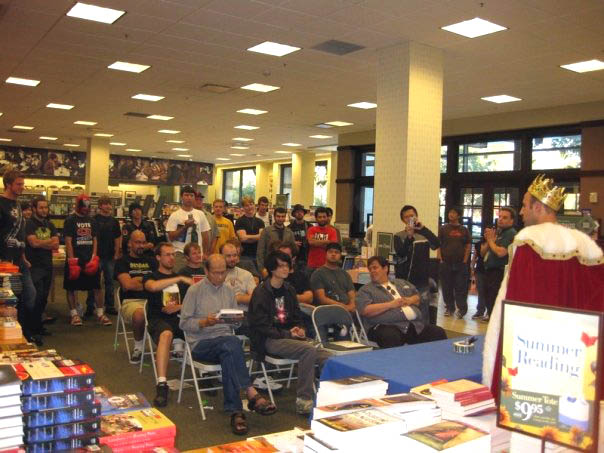 Look at this guy’s face. Even Maddox’s book artists don’t want anything to do with him at this point. 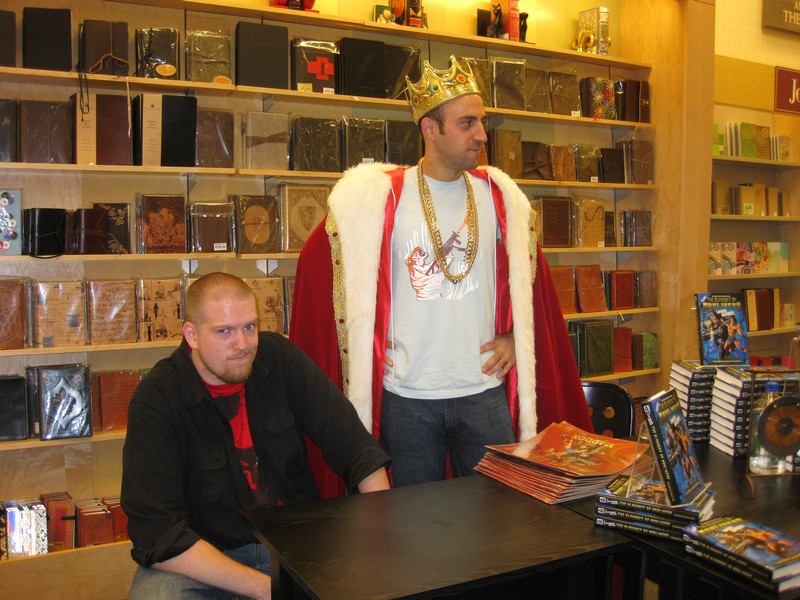 At first glance, you might think this guy was speeding. In actuality, he was going too slow for New York standards and thus got ticketed. This would explain why every New Yorker I see on I-81 is doing 100 in a 65 MPH zone. 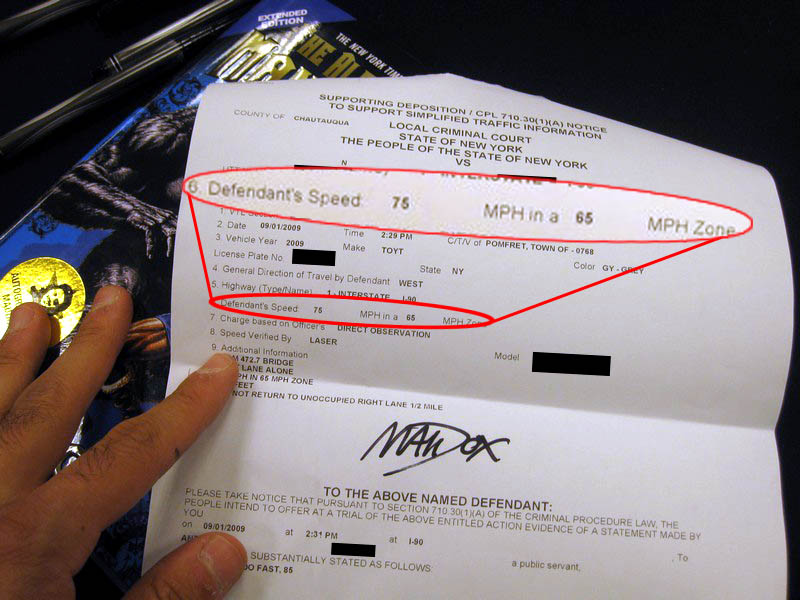 YEAH VIOLENCE IN FRONT OF THE KID’S SECTION. ROW ROW FIGHT THE POWAH. 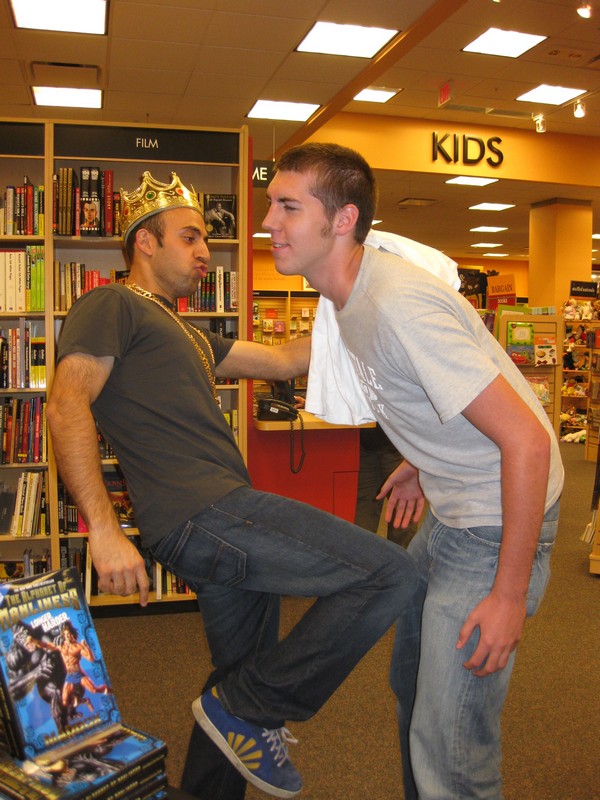 In conclusion, if you went to these book signings for any purpose other than to ridicule this unfunny has-been, you are a faggot.