Scrubs is a boring and shitty show.

Here is a summary of every episode of the television show “Scrubs”:

Anyone who still finds humor in two male friends acting ambiguously gay after the 20th time should probably question their own sexuality. We get it. J.D. and Turk are such close friends that they don’t care how gay they look when they do everything short of grope each other’s asses in front of the entire hospital. Ha ha ha. YAWN. Also, add the term “Bro-mance” to the blacklist of words that I will outlaw once I become Supreme Potentate of the world. If it looks like a duck, swims like a duck, and quacks like a duck, it’s a duck. J.D. and Turk are faggots.

Another thing that pisses me off about the show is that every character in the damn show is a new parent or pregnant. They might as well just make the whole hospital a maternity ward and change the name of the show to “How to Deal With Postpartum Depression”. How the fuck did these two guys become parents: 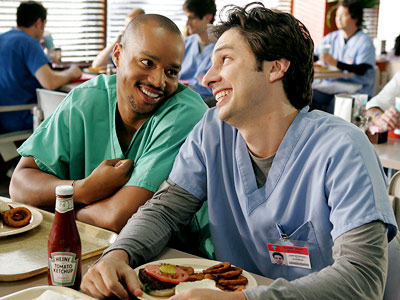 Not gay. Not at all.

I used to really hate Carla, Turk’s wife who acts like she’s on the rag at all times, but now I can understand where she’s coming from. If I had to put up with Turk’s faggotry on a daily basis with no escape from it, I’d be pissed off 24/7 too, even more so than I am already. Her depression spell after giving birth wasn’t so much her worrying about being an unfit mother as it was knowing that the baby was the spawn of that manchild.

Another thing that pisses me off is when people try to compare Cox to Dr. House. Let’s get this straight right here and now you retards: 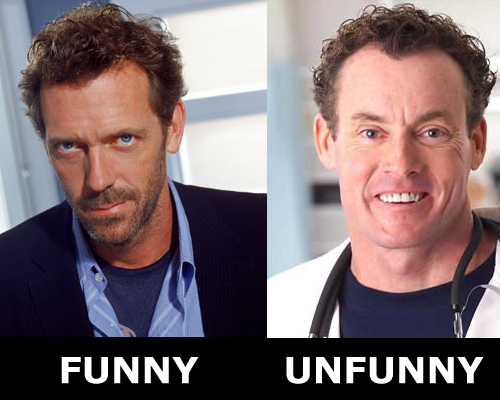 House does shit like make racist jokes at Foreman and Wilson and telling his boss to her face that he wants to fuck her. The only thing Cox does is call J.D. girl’s names over and over. “HEY SALLY! HEY BETTY! HEY STEPHANIE!” Does Cox secretly wish J.D. was a girl so he could justify some kind of sexual attraction towards him or something?

People like to argue that this and the J.D.-Turk gay act are running gags and that’s what makes them funny. They’re about as funny of running gags as the guy in Home Improvement who never showed his mouth. God I hated that son of a bitch so fucking much. In the last episode he showed his mouth. Maybe in the last episode of Scrubs J.D., Turk, and Cox will come out of the closet and have a huge gay three-way. Then the janitor guy will finally go on a psychotic break and kill them all. The janitor guy will be played by me, and I’ll be using a real M4 rifle with live ammo.

I hate this show with a passion. I tried to give it a chance, honestly. I watched multiple episodes of it, thinking it might be one of those shows that grows on you. The only thing that grew was my contempt for the show. This show is fucking annoying and needs to be taken off the air. For extra reassurance, someone should shoot Zack Braff in the face.