There’s very few songs I like that were made after 1989. Today, I’m gonna list the ten worst things about today’s music, but not in any order. Here we go!

That’s right. It turns out I was a fucking idiot and thought Jello was still with the Dead Kennedys. He’s been gone for years. But funny, I have a CD from the Dead Kennedys from 2004 (it was a live recording at some punk show) and Jello is the lead singer. Apparently, Jello and the other band members had some falling out, and he said “Fuck you.” Good man. I recently downloaded one of his latest CDs, “Sieg Howdy!” with Jello Biafra and the Melvins. That CD proved to me that it was JELLO who was behind the ass-kickery of the Dead Kennedys, and not the other asshole band members. Fuck them. Jello is awesome.

This pisses me off more than anything. All of the sudden, we have bands like Fall Out Boy and Simple Plan claiming “This is punk!” Since when did this become this?

It’s enough to make me fucking vomit. Which leads me to my next point:

I mean that literally and figuratively. I heard Billie Joe Armstrong once tried to get off by shoving a turd up his ass. It just so happened to be the turd of “Tres Cool,” another band member. What kind of stage name is that anyway? My 3 year old cousin can come up with something better than that half-assed piece of shit he calls a name. Jello Biafra chose his name because it was ironic. Biafra was a “short-lived secessionist state in Southern Nigeria.” The country came to an end because of a blockade, resulting in hundreds of thousands of people dying of famine. Jello Biafra thought his name would be ironic, since Jello is a food, and Biafra died of starvation (both the country and the people). Best fucking name ever. I hope Jello kicks the piss out of Billie Joe Armstrong.

Everyone I know who listens to Green Day is a 14 year old girl (namely most of my ex-girlfriends). Billie Joe Armstrong wears eye-liner. What a fag. I’d write more about Green Day, but that would consume this entire article.

I fucking hate this d-bag. He was good when he was with the Beatles, but when this fucktard SOLD THE RIGHTS FOR THE BEATLES SONGS TO MICHAEL JACKSON, I felt hatred like I never felt before. I hope McCartney’s plane crashes into the middle of the Atlantic Ocean and he drowns because his limbs were blown off by the explosion. Seriously, Michael Jackson? What the fuck was this guy on when he did this? At least sell them to someone like Mick Jagger, or Jello Biafra. Jello Biafra and the Dead Kennedys did a kick ass cover of “Back in the USSR.” I don’t feel like finding it right now though. But fuck Paul McCartney. If God was really as caring as they say he is, he would have had Paul McCartney assassinated instead of John Lennon (RIP).

Rap music defines everything that is wrong with society. Besides promoting violence (hey, I have no beef against poppin’ caps in dem shit-talkin’ niggaz), it promotes being fucking imbeciles. I swear to god. These are the type of people that if you look at them wrong, they’ll have their “squad” jump you. Squad? What the shit? Does that mean you’ll get your basketball team to jump me? Or you’re in the Air Force, and you’ll get your Squadron to jump me? I don’t know. All I know is that kicking someone’s ass for looking at you is the same exact shit gorillas do in the wild. Try looking at the alpha male in a pack of gorillas. Just stare at him. I guarantee he’ll kill you.

I’ll admit, I like writing my own rap lyrics and trying to “spit” them when I’m bored. But that’s only because I like to piss off the people who take it seriously. I don’t listen to any rap music at all. You can’t spell “crap” without “rap.”

I rest my case.

I’m sorry, but suing a 12 year old girl for over $2,000 is just low. Instead of downloading songs for free (or at least a reasonable price), they want us to pay $20 for a fucking CD with 10 songs on it, adding up to like 40 minutes worth of music. Don’t charge so damn much for music, and we’ll probably be more willing to pay for it.

I heard in Australia, they’re allowed to raid peoples’ houses if they find someone is illegally downloading music. Imagine that shit. The SWAT team kicking down your door, and running into your house with full body armor and military-grade firearms because you downloaded 50 Cent’s latest album. In all honesty though, if you get caught downloading 50 Cent, you deserve to get beaten by the SWAT team, and thrown in prison with Big Gay Brucey as your cellmate.

The FCC is the bane of the radio industry. Thanks to these fuckers, you’re not allowed to play music with curse words on the radio. Curse words include “ass” “shit” “fuck” “retarded” “nigger” “spic” or pretty much anything other than damn, hell, or bitch. Seriously, they actually censor the words ass and retarded. I was riding in a car with my now-ex girlfriend, and I was forced to listen to some shitty pop station (I call it 106.1 Gay FM). Now I know a little bit about shitty pop music, and I know that in the song “Get the Party Started” by Pink, that the lyrics are NOT “I’ll be burning rubber and you’ll be kissing my ends.” I also know that the Black-Eyed Peas song is NOT “Let’s get it started in here, ha.” For those of you lucky enough not to know the real lyrics, they are, respectively, “I’ll be burning rubber and you’ll be kissing my ass” and “Let’s get retarded in here, ha.” This kind of censorship is plain stupid. That’s why you’ll never hear anything good on the radio. Ever. While on the subject of radio…

Radio station playlists are fucking stupid. They always play the same exact song at the same exact time of day every day, unless they have one of those “request a song” dealies. And even then, people always request the same fucking shit all the time. I can’t begin to tell you how many times I’ve heard some dumb ass request “Free Bird” or “A Day in the Life.” I used to like these songs, but after hearing them played repetitively, I’m starting to wish they were never written. I rarely ever hear any good songs. throw us a fucking bone, and at least play “Paradise by the Dashboard Light” once a week instead of once every six months. Or “Because the Night,” by Patti Smith. It’s always the same stale songs over and over AND OVER. If you’re going to play the Beatles, play some of their better shit, like “Sergent Pepper’s Lonely Hearts Club Band,” “Helter Skelter,” “Nowhere Man,” or “Yellow Submarine.” I’m sick of hearing only three of their songs out of the hundred or so they made.

And I have NEVER, EVER heard a radio station in Philly play anything by Iron Maiden. Ever. I think I heard “Run to the Hills” once, but I think it was some shitty cover band doing it. I know they won’t play the Dead Kennedys, because people would pitch a hissy fit. “OH BOO FUCKITY HOO! THEIR LYRICS ARE OFFENSIVE!!!!” Fuck you, pussies. Your ears don’t deserve to be blessed with the holiness that is Jello Biafra’s voice.

This is a given, but I figure I’d mention it anyway.

Only a braindead idiot could possibly enjoy this show. I guess that’s why my family does. All these “reality” shows with judges have the same fucking thing: One judge is a dick (and is ALWAYS British for some reason), one judge is a female who always patronizes the contestant, and the other is some washed-up douchebag who is supposed to be the “neutral” judge.

I remember that Bo Bice guy. They called him a fucking rocker. EXCUSE ME? ARE YOU OUT OF YOUR FUCKING MINDS?! This pussy: 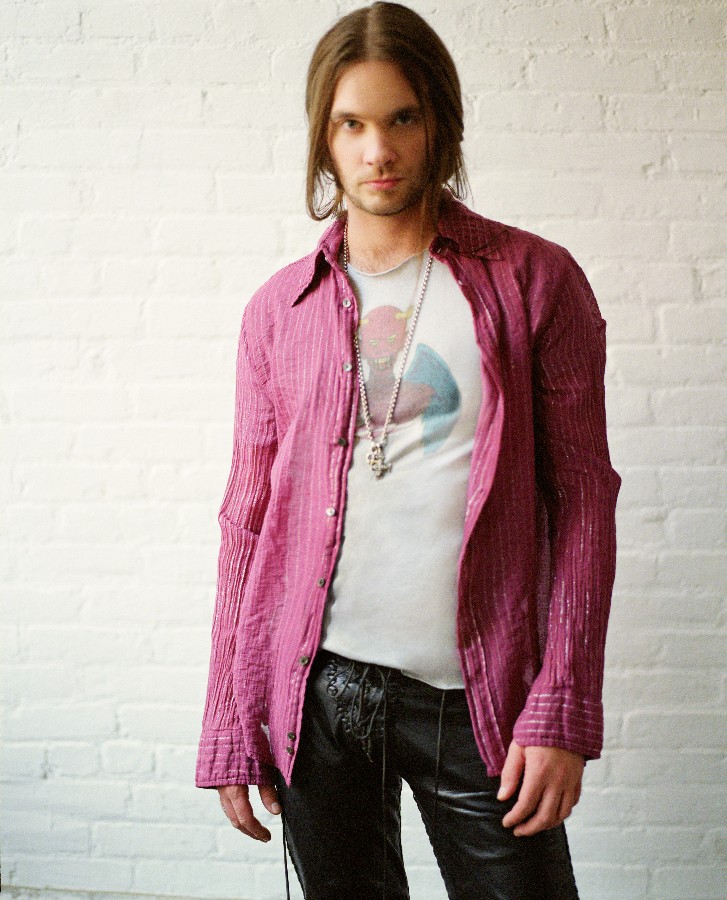 Is a fucking rocker? I hope somebody nails this Jesus wannabe to a fucking cross. I wish Chris Benoit killed this cocksucker instead of his own family.

And Ryan Seacrest. Words cannot describe how much I hate this douchebag. I want to punch him in the face. Honest to god, I would not mind doing jail time and getting beat down by his body guards if it meant I could just slug him one in the face. I want to try out for American Idol, and work my way to the final two contestants. Then, when he announces that I’m the next American Idol, I’ll just haul back and deck him right in the face. I don’t care if I knock him out, although it would be the perfect chance to make the joke “Seacrest out.” I just want to punch him in the face.