Women in America are such slitches. Seriously.

All they do is try to control guys with flimsy backbones. This is why the longest relationship I’ve had with a girl lasted five months. The slitch realized I wasn’t going to cave in to her constant pestering and get a driver’s license. Fuck driving. If I had a car, my horn would be worn out before I even got it home from the dealership. Plus, I can’t afford insurance, because being a dishwasher and busboy doesn’t pay much. Anyway, she dumped me because I wouldn’t get a car to freight her fat ass around wherever she wanted. “AJ, get a license!” “Why? I don’t need to drive anywhere.” “But I do!” “So you want me to shell out thousands of dollars for insurance, a car, and gas just so I can drive you around everywhere?” “That’s what boyfriends are supposed to do!” “Bull-fucking-shit.” “Then we’re through AJ!” “Whatever. Just let me blow my load in your mouth first.” “Wha…” SPLOOGE! My parting gift to her was a big load of AJ Juice™ right on her face. Shoulda stopped talking and let me finish first, bitch.

This is a recurring trend among most girls from America. I once met this British chick who was an exchange student at my high school. She was sitting by herself in the lunch room. So being the super suave James Bond-style womanizer I am, I came up to her, and in my best James Bond impersonation, said “Name’s Jerk, Angry Jerk.” Well, of course I didn’t say my name was Angry_Jerk. I told her my real name. But if you don’t know my real name, then I probably don’t want you to know it. She laughed and introduced herself as Kelly. I asked her why she wasn’t socializing with the other girls. “American girls are slutty and stupid.” she replied. “I want nothing to do with them.” “What makes you think that?” I asked. She replied “All I hear them talking about is how many guys they’ve screwed, and how whipped they have their men.” “Wow, you and I are alike.” I said. “Wanna fuck?” So we fucked. Just kidding. I was too afraid to ask a girl out back then. I walked away shyly. Here is a widely circulated picture of the major differences between American bitches and British chicks: 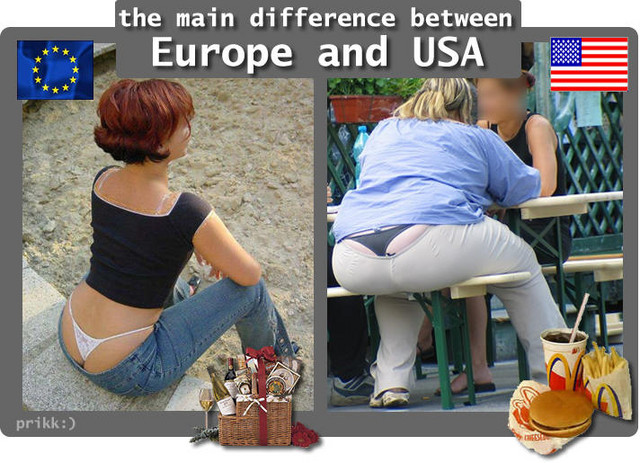 As you can clearly see from this picture (unless you have gone blind from the atrocity that is the American bitch, in which case you’re not American), the average American bitch is a fat slob, whereas the average British chick is nice looking. So what is an American guy like me to do? I could go to England, but that would cost a bit, and I’m probably on that No-Fly List. Or I could hope and pray to run into a British chick who lives in America. Or I could spend the rest of my life porking fat chicks. Fuck it, I’m gonna save up to go to the UK.