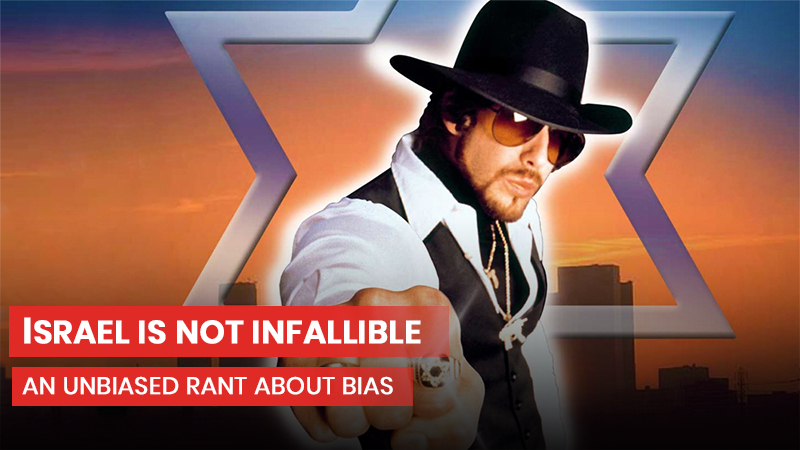 It’s time to stop pretending that Israel can do no wrong.

I’m tired of the huge double standard when it comes to Israel and their behavior on the world stage.

If Israel attacks a country, it’s called “self-defense”. But if any other Arab country attacks another country, you can bet your sweet ass that the US Military will be over there in a heartbeat bombing them and toppling their “oppressive” regime. That is, of course, if the Israeli Air Force doesn’t take the initiative to do it themselves.

If you say that the Muslims had their land stolen by the West and given to the Jews, you’ll usually hear the lame ass excuse “Well the Israelis had it stolen 2000 years ago!” Great argument, moron.

Of course, when you mention that by their convoluted logic America should be given back to the Native Americans, they stutter and stammer about how it’s somehow different. It doesn’t matter if some “ragheads” get up-rooted, but heaven forbid you give up your comfy lifestyle to return the land America stole back to its rightful owners.

Another thing I’m sick of hearing is morons parading around what the Iranian President supposedly said. According to mainstream news outlets, Ahmadinejad declared that “Israel should be wiped off the map.” Numerous sources have in fact shown this to be a mistranslation of what he actually said. Here is an entry from Wikipedia:

“The ‘wiped of the map’ translation originated from the state-controlled Islamic Republic News Agency. This translation’s use in the media has been criticized. Arash Norouzi, artist and co-founder of The Mossadegh Project, says the statement ‘wiped off the map’ did not exist in the original speech and that Ahmadinejad directed his comment toward the ‘regime occupying Jerusalem’. Norouzi’s translation of the Persian quote reads; ‘the Imam said this regime occupying Jerusalem must vanish from the page of time.’ Juan Cole, historian of the Middle East and South Asia, concurs; Ahmadinejad’s statement should be translated as, ‘the Imam said that this regime occupying Jerusalem (een rezhim-e eshghalgar-e qods) must [vanish from] the page of time (bayad az safheh-ye ruzgar mahv shavad),’ noting that there is no Persian idiom to wipe something off the map. Shiraz Dossa, a professor of at St. Francis Xavier University in Nova Scotia, Canada, also believes the text is a mistranslation.“

According to translators, he said that the Zionist government that runs Israel should fall. Zionism is the movement which supported a Jewish state. It is important to note that there are Jews who do not support Zionism. Jews Against Zionism and Neturei Karta, Orthodox Jews United Against Zionism are both Jewish organizations that do not support the Israeli statehood.

If someone dares to speak against Israel, that person is automatically equated to Hitler and the Nazis. There are plenty of legitimate reasons to hate Ahmadinejad, we don’t need to start making shit up.

Even better is when people say that Jews don’t control the banks, and that this is a racist statement.

According to Wikipedia, the current Chairman of the Federal Reserve Bank (The people who print America’s money) is Jewish. The Mayer Amschel Rothschild family is also Jewish, and has supported Zionism. I admit, I don’t know enough about banking families to say that all of them are run by Jews. But to say that Jews don’t exert some control over our money is an outright lie.

Is this part of some world domination conspiracy? Probably. Is it a Jewish conspiracy? Probably not. The fact is, Jewish families tend to place more pressure on their children to succeed (Hell hath no fury like a Jewish mother’s scorn), leading them to pursue higher paying jobs in fields like banking.

Also, I oughta point out the stupidity of people who deny the Holocaust.

These people either ignore common sense and logic by flat-out denying it ever happened, or they claim that the genocide didn’t happen to the extent they said it did. “It wasn’t 5-6 million Jews killed in the concentration camps! It was only 2-3 million, LOL!” Are you guys huffing paint thinner or something? There’s a ton of evidence that the Holocaust happened, and even if the death toll was overreported (it wasn’t) it doesn’t make the genocide any better.

That said, I think laws making it illegal to deny the Holocaust are bullshit. If someone wants to make an ass out of themselves and deny the Holocaust then let them. There’s a thing called “free speech” that allows you to make yourself look like a huge fucking retard.

Also, RIP Drake, one of the most legendary members of the now-decommissioned AJnet Forums. You will be missed, Wise Old Man. AJnet operatives don't die, they just get reassigned to the "other side".